Beware that his shadow doth not burden your dreams with horrible fears.

What can be said about a movie that has existed for 94 years that hasn’t been said?  I pondered this after declaring that I would write about it, then I realized that I haven’t watched it in a very long time.  As a child this movie was the reason I didn’t even trust a nightlight, too many shadows, however I subjected myself to and suffered through the entire screen time of the original 1922 Nosferatu: A symphony of horror, directed by F.W. Murnau.  I want you to understand when I say “suffered through” I do not mean this as to say the movie is anything besides amazing.  What I mean is I had to sit through a movie that was the cause of a good majority of my childhood nightmares. 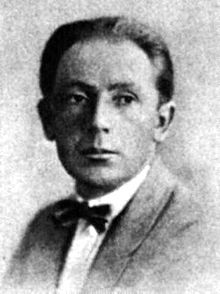 This guy owes me a ton of new sheets.

When the movie was first made in 1922 it was an unauthorized adaptation of Bram Stoker’s Dracula.  To dodge legal bullets a few of the secondary cast were removed and the rest had their names changed.  It managed to stay very source material despite the legal restrictions they had to work with.  It is easily one of the greatest horror films ever created, I detect an eye roll or at least a scoff.   Well know this, dear reader without Nosferatu, you wouldn’t have your sparkly dreamboat fantasy come true blood suckers.  I realize that down the road legitimate movie adaptations of Bram Stoker’s Dracula were made in 1973 (Television Movie) and again in 1992, neither would have even had an ounce of the nuance that Nosferatu brought to the table had it never been made.  This was the grandfather of it all, the first portrayal of the wicked fabled Vampire to be put on film.  If that isn’t enough to keep you interested, allow me to sweeten the deal.  If you ever find yourself constipated  just think about Count Orlok Staring at you from the far end of your hallway in the dark at 2:am. 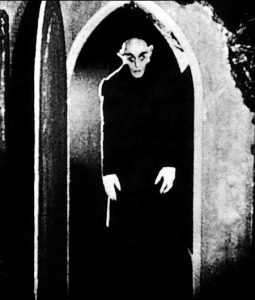 Better than any laxative

This guy is just scary, everything about him makes me want to run in the opposite direction while screaming “Kill it with fire.”  Max Schreck‘s performance is absolutely spot on.  His ability to be both creepy, and terrifying at the same time is just perfect.  The movie’s original release was in a time period before owning a television was even possible so if you’re wondering why the actors seem so flamboyant and write that off as “bad acting” they are simply following the traditions of play actors of the time as it was more the norm to see a play than it was to see a movie.  The music which was composed by Hans Erdmann which at the time would be played in tandem with the projection, accompanies the movie very well.  The tones help emphasize the situations from whimsical, to terrifying really well and even if you aren’t a fan of wordless movies, maybe you can appreciate a well orchestrated piece of music.

It’s hard to imagine that in less than a decade this movie will be one hundred years old.  At this point even if you’ve never seen this movie, you know you’ve seen Count Orllok.  His image has been plastered on Halloween decorations, clips have been used in everything from music videos, to documentaries.  Clips are even used in the intro to Ernest Scared Stupid, and Even your young ones have been exposed to his horror as he makes an appearance in Spongebob Squarepants, they play it off as though he were just being silly but I mean seriously he’s just creepy.  The whole movie is impressive with the various light distortion tricks they were able to pull as well as the bizarre stop motion movement Count Orlok’s horses and carriage moved.  The time this movie takes place in is also mind-boggling.  Try to wrap your head around a world so small that your arrogance allowed you to think it larger, so much in fact that when Count Orlok gets to town and starts feeding on the villagers like they were giant Capri Suns, they couldn’t fathom anything like it being the work of a vampire, or even one person.  Count Orlok seems to leave a trail of rats in the cursed dirt he gets his powers from which the villagers assume the rats are spreading a plague. 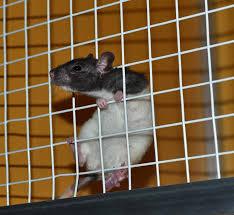 If your world is so small you still need a town crier, there is no way this plague thing wouldn’t be freaking you out.  Everyone is pointing fingers and eventually they target the creepy bad reputation, once influential estate broker now declared a madman, but actually servant to Count Orlok, Knock.  The town sets out to find him, and eventually they do, but not before this awkwardly shaped troll of a man pulls some impressive hidden parkour skills and manages to scale a building and taunt the townsfolk from the roof.  This movie has it’s moments, but you have to appreciate the finer things in simplicity.  Despite the camera quality, and the very few prosthetic make-up techniques he is still arguably not only scary but an iconic image when one thinks of horror.  The look of the landscapes, the architecture of the buildings, the clothing even if embellished, the music, it all adds up to a really great watch.  It has romance, tragedy, terror, a little something for everyone really.  That’s just my opinion, and part of why I wanted to write this article.  The other was because I had heard rumors that there was possibly a remake in the works, A few minutes of digging has confirmed such, it will star Doug Jones as Count Orlok, and is directed by David Lee Fisher.  Here’s to hoping they don’t destroy a classic.