Yesterday.. she was chosen. At midnight.. she was sacrificed. This morning.. she was buried. But tonight… Tonight She Comes. Everyone else will die. 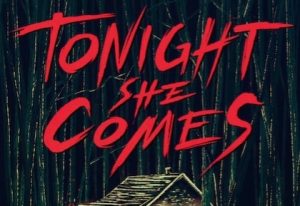 “After a girl goes missing, two of her friends and a mysterious set of strangers find themselves drawn to the cabin in the woods where she disappeared. They will laugh, they will drink, they will kiss, they will make love, and THEY MUST ALL DIE.”

Featuring a spine-tingling synth score composed by Wojciech Golcewski (We Are Still Here, Beyond The Gates, Late Phases), a hard-hitting sound design by Shawn Duffy (Darling, Carnage Park) AND being hyped with a special festival poster illustrated by Marie Bergeron, the film premieres October 9th at the GRIMMFEST in Manchester, UK.

Below you’ll find the poster featuring a women seemingly nude in the shadows walking through a lake of blood, how cool is that?!!! 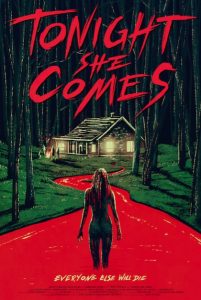