OMG: Latest Trailer for Live-Action “Attack on Titan” Will Rock You

Earlier this year, fans learned that a live-action movie remake of the Japanese manga Attack on Titan was in the works overseas; directed by Shinji Higuchi (The Floating Castle) and written by Hajime Isayama and Yusuke Watanabe. We showed you the first trailer for Attack on Titan last April, and it was, in a word: Unfuckingbelievable! In case you missed it, or want to refresh your memory, read the official synopsis and take a gander at the video below. 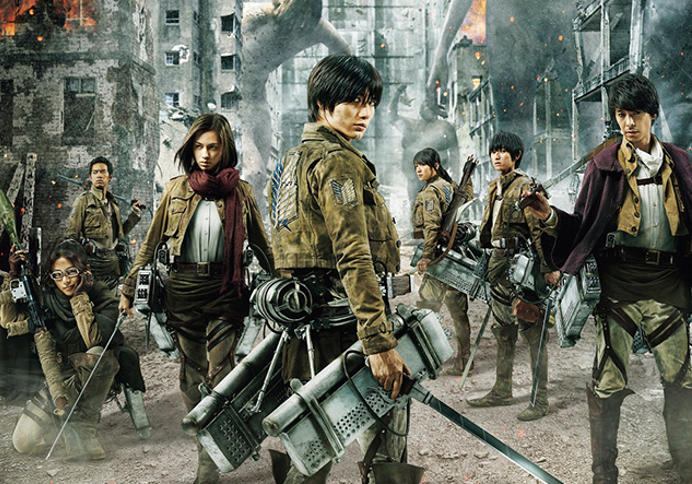 The highlight of this trailer is, hands down, seeing the towering Colossal Titan in action, looking like something out of Clive Barker’s Hellraiser as he pulls down walls. But if you’re like me, what really creeps you out about Attack on Titan is the bumbling hordes. These creatures may pale when compared to the Colossal, but something about them is utterly unnerving, tickling the fight-or-flight reflex at the core of our reptile brains.

Sexless, infantile, and mentally deranged, your average Titan would be comical if it wasn’t a giant with an insatiable hunger for human flesh. Doddering like toddlers as they flatten towns, driven by the basest of instincts, and impossible to reason with. And did I mention they’re creepy as hell?

While the trailer above teases but never reveals the Titan hordes, a new Attack on Titan trailer was released on Tuesday—and this one gives us the goods. Finally, a clear view of the clumsy, naked man-eaters in all of their horrid glory! They’re more corpse-like and less flesh-tone than I expected, but still utterly insane! Check out the vid below and I think you’ll agree: These live-action Titans are just as horrifying as their anime inspirations! Now, marvel:

You may have noticed that, while mind-boggling and captivating, this trailer is in Japanese and lacks subtitles of any kind. Luckily, I was able to pull a translation, courtesy of ANN over at www.ComicBook.com.   Go ahead and watch it again as you read along. You know you want to!

Narrator: Most of humanity was consumed by the Titans who suddenly appeared.

Narrator: The survivors of the war with these Titans erected giant walls three layers deep and kept the peace.

Narrator: But today, our invulnerable security no longer exists.

Voice: The rumors were true.

Kubal: Why don’t we take back the plundered city? To carry out this honorable operation, we offer our hearts!

All: We offer our hearts!

Mikasa: The world is cruel

Text: Why did the Titans appear…?

Voice: I want to know the truth about this world!

Voice: If we fail, humanity is doomed.

Text: Why does humanity fight…?

Text: Is this world cruel?

Mikasa: We were together, always. 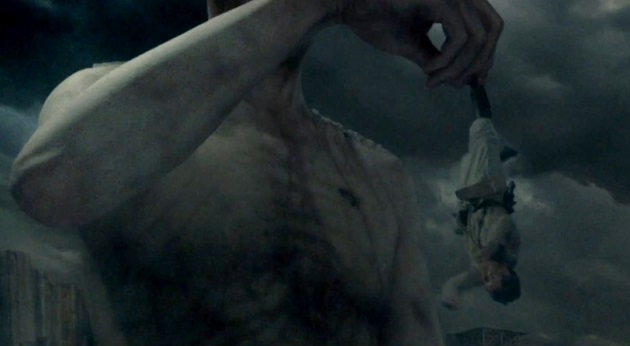 Besides revealing the Titan hordes in all their glory, this latest trailer also gives us our first look at the manga’s trademark 3D aerial battles as we zip between buildings with the Outer Wall Restoration Team. The FX are absolutely dizzying, and I can’t wait to experience this action on movie screens.

Blink and you’ll miss it, but fans already familiar with Attack on Titan mythos will recognize a particular saw-toothed giant, a character crucial in this saga—but no spoilers here!

Attack on Titan will be released as two separate films, the first dropping in Japan on August 1st. Still no word on an American release date, but we’ll update you as soon as one is announced. Those interested in delving into the Attack on Titan anime series (which I highly recommend), can buy Volumes 1 & 2 on Amazon: HERE.

Are you excited about the upcoming live action Attack on Titan movies? Are you already a fan? Sound off in the Comments section! 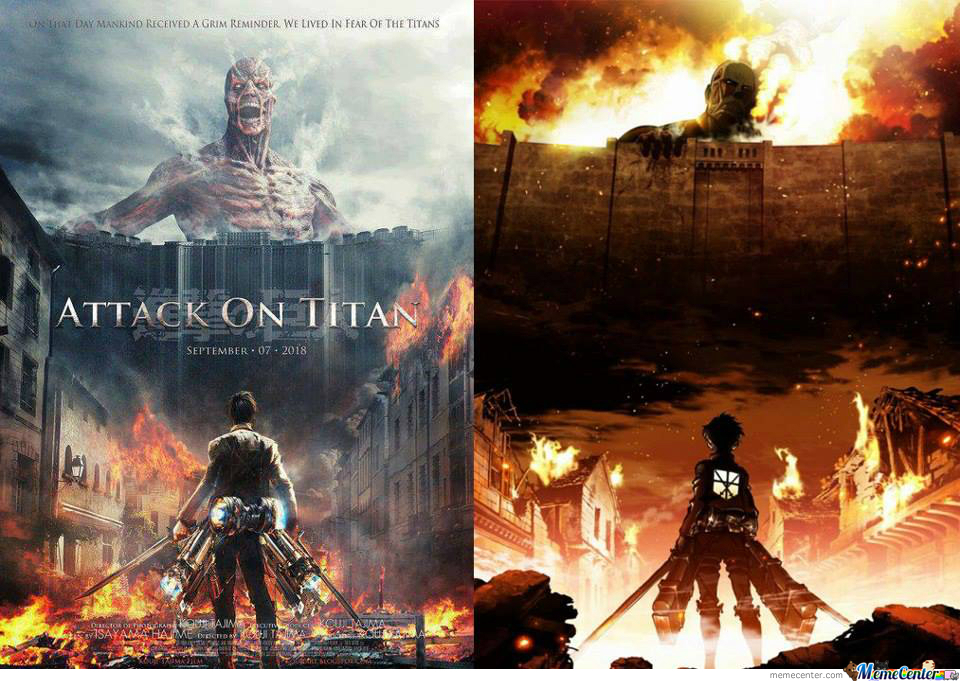