“There’s Something Wrong With Esther”

When I heard that there was going to be a prequel to the 2009 film Orphan and that Isabelle Fuhrman was again going to star in it, I was incredulous. Isabelle was only 10 when the film was made. Now she is a beautiful adult. How in the hell were they going to pull that off? 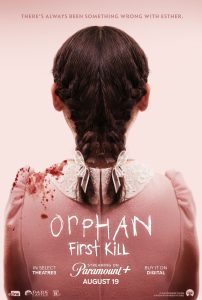 When Orphan first came out in 2009, it did well, but it wasn’t until it came out on DVD, that the film became a cult favorite with fans all over the world. Those fans have been clamoring for another film ever since, and 13 years later they get a prequel. Orphan: First Kill tells the story of Esther, a sociopathic 33-year-old woman named Leena Klammer, with hypopituitarism disease that stunts her growth, allowing her to pass as a little girl.

The new film is set two years before the first one. Leena lives in the Saarne Mental Institute in Estonia and is considered their most dangerous patient. We already know about the hormonal disorder that causes her dwarfism, and that she has spent most of her life posing as a little girl, usually to steal from families that adopt her.

Or sometimes worse, which is why she is locked up.

But she isn’t done being a bad little girl. Leena escapes the psychiatric hospital and pretends to be the missing daughter of a well-to-do family in America. Unfortunately, for Leena/Esther- this family isn’t exactly what she bargained for. 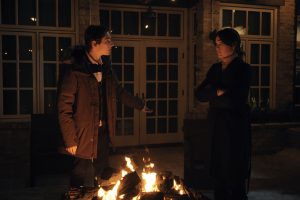 The Albright family is an odd, awkward, and very wealthy family. None of them seem comfortable with each other. Julia Stiles stars as Tricia Albright in one of the best roles I’ve honestly ever seen her in. Usually not given much depth of character, I really loved the controlling matriarch of the family and the twists she brought to the story. Depressed, since their daughter disappeared, artist dad Allen (Rossif Sutherland) is delighted to have his little girl back. Whereas the narcissistic and obnoxious son Gunner (Matthew Finlan) is none too pleased to see his darling sister again. Both mother and son know something is wrong with the newly arrived Esther.

But if you want to know why- well you will have to watch the movie yourself. 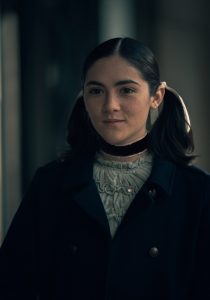 So how did they make the lovely Isabelle into a prepubescent 10-year-old again? My first thought was that it would be a total CGI creature and the cast would have to pretend that she was there. But it turns out there are other kinds of movie magic and in this case, it’s forced perspective. Have you ever held your hand up to something big, like the Eiffel Tower, and taken a photo where it looked like it was tiny and in your hand? Well, that is basically how they did it. Even the actors had to have faith as they played to each other from odd heights and distances, that it would work. But work it did. I would have thought that Isabelle really had the disease that the character Esther had in real life. But the magic worked. I give a lot of credit to the film crew who pulled it off, but also, kudos to the amazing cast. Acting is hard enough, but when you must go to other extremes just to acheive something like this- well I am impressed. 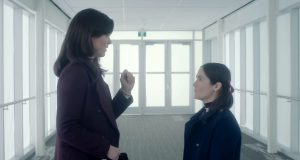 I must admit that the mystery of the first film and who Esther really was, made the original Orphan work for me. So, this film is a notch down, simply for that reason. And oddly enough with all the amazing work they did to make Isabelle a little girl again, and some really spectacular blood and guts, the CGI fire at the end literally made me cringe. It was so fake.

But…. did that totally ruin it for me? Not at all. I really enjoyed Orphan: First Kill. Isabelle Fuhrman stole the show as the creepy Esther. Julia Stiles, Rossif Sutherland, and Matthew Finlan all were terrific too.

Even if it didn’t live up to the original, I think the two together would make an amazing double feature horror movie night. I could even see this being a favorite of the midnight movie theater crowd.

Orphan: First Kill will be available in Theaters, On Digital and
will Stream on Paramount+ August 19th, 2022.

All photos courtesy of Paramount Pictures