‘Piercing’ is a Sharply Sadistic and Bloody Comedy

A dark and twisted love story, perfect for romantics and horror fans alike

Piercing is a very unique story about two damaged and sadistic people finding each other. I was seriously blown away!

With so much blood involved, it sounds weird to say – but this film is truly a romance at its core! A pitch-black comedy brought to us by the warped mind of Nicholas Pesce, (remember his first film The Eyes of My Mother?) Piercing has changed my whole view on the world of fetishes. There really is the perfect person for everyone, even if you find them by accident. 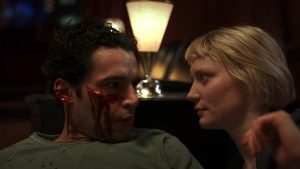 In the opening scene we meet Reed. (Christopher Abbott) Immediately we know something is a bit off with him. It looks like he is just about to stab his baby, who he hallucinates is talking to him, but is luckily interrupted by his wife. Whew- I was a bit concerned, and then realized that mild mannered, nervous looking Reed, is a killer in the making. He actually had to stop himself from murdering his own child, even though he fantasized the infant telling him “you know what we have to do, right?” At this point it is obvious Reed is crazy and something bad is going to happen very soon.

Knowing now what is in his mind, we watch Reed pack his bags to go on a “work” trip. What he is really doing is going to a hotel so he can hire and kill a prostitute. He has the whole thing planned out, down to the smallest detail. One of my favorite scenes is him rehearsing the crime in mime, exactly how he thinks it is going to happen. Getting her a drink, chatting, dragging her body to the bath tub, cutting her up and finally cleaning up the blood. That scene alone would have been a great short film, it was very entertaining.

But as we all know, the best laid plans don’t always go the way you want them to, no matter how much thought is put into it. Reed’s plan turns awkward right off the bat when adorable prostitute Jackie (Mia Wasikowska) comes walking in and owns the place. Reed is stunned to quickly find out that Jackie is completely unpredictable and just as messed up as he is. 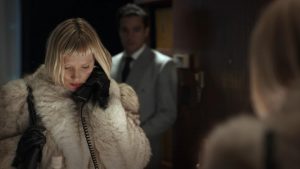 Even though we eventually find this to be a true horror film filled with blood and violence, it is hard not to become enamored with these two damaged souls as we watch them seem to fall in love. But are they just trying to disarm each other? Neither one of them is someone you should allow to make you a drink or bring you anything else from the kitchen.

Piercing has one of the most beautiful aesthetics I’ve seen in a long time. It is so reminiscent of the 70s giallo films, (I loved the yellow record player and phone) with gorgeous sets and amazing colors. Everything about the rooms were either deeply masculine or exquisitely feminine, with sexuality practically oozing from the walls. The most diverse and interesting music (think a Quentin Tarantino flick) accompanies the dangerous and violent dance by these two unlikely, yet perfect partners. This is a soundtrack I would love to own. 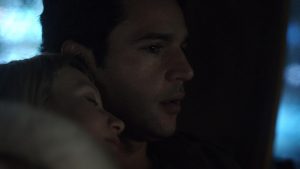 The allure of this film for me, was never quite knowing who was winning the cat and mouse game they were playing. At times Reed was on top, then Jackie, then back again. Piercing is full of psycho-sexual fantasies, fetishes, S&M, and an abundance of blood. Yet the bizarre story is so unique and imaginative that I caught myself smiling through most of the film.

The bottom line though, is that a movie like this would not work if it was not so perfectly cast. Abbott and Wasikowska are phenomenal. Their chemistry is so real and so alive. This film is shocking and endearing, ugly yet beautiful, terrifying, but darkly comical. And the ending- oh what an ending. I hated and loved it at the same time. I would have liked to have seen more…but did I really? I think it truly ended at the perfect place. But you will have to see it to find out for yourself. Look for it on DVD and Blu-ray March 12th, 2019.

PIERCING is written and directed by Nicolas Pesce. (The Eyes of My Mother) The horror mystery suspense film stars Christopher Abbott (It Comes At Night), Mia Wasikowska (Crimson Peak) and Laia Costa (Victoria). PIERCING will be available on Blu-ray and DVD in the United States and Canada on March 12, 2019.