‘Pledge’ 2018- A Darkly Funny, Yet Horrific Tale about the College Experience Gone Wrong

Few get in. None get out.

I never did the full “college experience” that I hear people talk about. Going off to another state, living in a dorm, joining a fraternity/sorority, partying and belonging to something bigger than myself. Oh, I did the partying part, but I never left my home to do it. So why do college kids want to join frats?  As far as I can tell, simply to be popular. In reality, we all just want to have fun with the in-crowd and be accepted socially.

But then there is the hazing.

Looked at by many as a kind of boys-being-boys activity, hazing gone wrong has become a serious problem, the death tolls have risen in past years and many students have died in such ceremonies. Simply drinking too much alcohol, getting spanked, eating gross stuff or left blindfolded in the woods isn’t enough. Things have gotten worse recently, leading to what is now being handled by police as murder and assault. 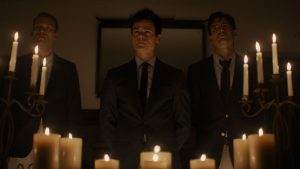 When the film Pledge opens, we see a lovely drone shot of a forest and corn field. But what’s that? A boy running away from someone or something, always looking over his shoulder. When the poor guy gets hit on the head with a bat, we get a glimpse of his stomach as he is being dragged away. On his skin we see a design, possibly burned into his flesh. Right then it’s obvious that whatever activity he is involved in, it’s not a whole lot of fun. 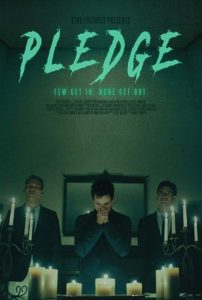 Synopsis: Pledge follows a group of dorky freshmen looking to make the best of their “college experience” and join a fraternity. These naive young nerds have no idea what they are getting themselves into. After being excepted into a seemingly wonderful upper-class secret society and the hazing begins, their lives are turned upside down. What they thought would be a party-all-the-time clubhouse, has now become a horrible prison.

Four years after the opening shot took place, we meet a group of goofy weirdos, searching during rush week for just the right fraternity to join. Convinced that this is necessary to make college perfect, David the bespectacled, babbling geek (Zack Weiner – who also wrote the script) Justin, the chubby video gamer (Zachery Byrd) and Ethan, the dorky sidekick, (Phillip Andre Botello) are escorted out of house after house, where they just don’t fit in. Justin and Ethan are not that upset, they would be happy to play video games in the dorm for the whole time in college, but David is more serious about it. Almost ready to give up, they are invited to a secret society in a remote mansion, by (of course) a beautiful girl and are excited by the opportunity to be accepted. Of course, they have no idea what the cost will be. Humans will do unimaginable things to be cool and Pledge really showcases this unfortunate fact.

After a night of partying with sexy girls, booze, and drugs, the boys are invited to join the exclusive club and told to come back the following night. When they return, there are no girls, just two more nerds like themselves. When the ritual begins, well, simply put, the shit hits the fan and the torturous hazing begins. This is some serious life or death pain and suffering. What will the guys put up with to belong to the secret club? Will they be the hunted or the hunters? Can they survive?

For lovers of gore- there is plenty. Pledge is a disturbing and bloody film, one that can easily upset the stomach of even seasoned horror fans. A special trick done with rats is particularly grotesque. The boys are put through rituals that are beyond gross and their tormentors are truly psychopaths!

Pledge is a well put together thriller, that belies that it is a low budget movie. Tight editing, great directing, pitch-black humor, and spectacular acting all put together, create an amazing horror film. You can’t help but feel bad for our protagonists as we watch them flounder. But the bad guys, well I have to admit, as much as I hated them and what they did to our trio of geeks, I couldn’t help but sort of love them a little. These are the guys everyone wants to be. Rich, good-looking, privileged, confident. Ricky (Cameron Cowperthwaite), Bret (Jesse Pimentel) and my favorite lunatic, that I loved to hate, Maxwell, played incredibly by Aaron Dalla Villa! A true sadist and sociopath, Max had the ability to seem calm and then turn on his victims like a beast hunting its prey. All of them had an animal magnetism that was hard to deny.

At the beginning of Pledge, it is easy to think that this is just another normal frat movie: Good guys vs. evil guys, things go wrong, people get killed. But I am happy to say there is so much more to this film! The incredible surprise twist at the end was fantastic! Pledge kept me on the edge of my seat for the entire 78 minutes! An incredible story from Zack Weiner, terrific directing from Daniel Robbins, gorily beautiful special effects, along with stellar acting from everyone makes this one of my favorite horror films to date! Pledge will be in select theaters and on VOD Friday, January 11th from IFC Midnight. If you have a strong stomach- enjoy! Remember “Great men don’t have a breaking point!”