The last thing his victims saw… was his camera

The infamous, grisly and sought after serial killer-themed film THE POUGHKEEPSIE TAPES finally sees an official home entertainment release on DVD & Blu-ray! The controversial film, from Director John Erick Dowdle (Quarantine, Devil and As Above So Below) will finally be available, just in time for horror fans to enjoy this Halloween.

The Poughkeepsie Tapes was scheduled for a theatrical release by Metro-Goldwyn-Mayer on February 8, 2008. The premise of the film was pretty gruesome- In September 2001 the Poughkeepsie Police Dept. discovered over 800 video tapes that contained horrific and brutal images uncovering the story of one of America’s most disturbing serial killers to date. The film, however, was removed from the release schedule, in spite of promotional advertising. Until recently the film had not been released on DVD and no official explanation was given for the shelving of the film. In July 2014, the film was given its first official release as a video on demand title available through DirecTV. It was subsequently pulled again less than a month later with no explanation. This did not stop it from being widely bootlegged by horror fans. So the fact that it’s finally coming out on DVD/Blu-ray – is getting fans very excited! 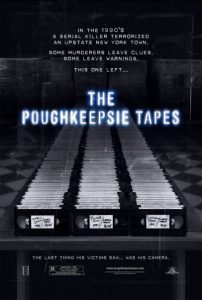 To guarantee yourself a copy- here is the information from Shout Factory on how to pre-order your very own!

Street date is 10/10/2017 – but if you order directly from Shout Factory it will ship two weeks early. Pre-order now at Shout Factory-Poughkeepsie Tapes. Extras will be announced at a later date.