USA takes us into "The Purge" world and the "Purge City" store helps you prepare for a night you won't forget!

The Purge is coming to a TV near you. Along with one of the most creative interactive displays seen at SDCC called appropriately; “Purge City” Blumhouse and James DeMonaco brought us all the stars and info on the new, The Purge TV show at Comic Con. Check out the new trailer!

The commencement of The Purge officially began at San Diego Comic-Con, where USA Network and Blumhouse Entertainment assembled the cast and creators of the hit horror franchise and upcoming television series to offer an exclusive look at how The Purge universe is growing and evolving, and what to expect from the 10-hour event series heading to USA Network this year.

Things began with a discussion of The First Purge, the prequel film that explains the origins of the New Founding Fathers and how the Purge was started.

“Election Year was the end of a trilogy,” DeMonaco explained, “so when the fourth movie came about, it was natural for us to try and tell the origins of how [the Purge] started.” As for The Purge series, which dominated the rest of the panel’s focus, the story takes place about a decade after The First Purge, between Anarchy and Election Year. That timeline means there’s plenty of opportunities for franchise Easter eggs!

Kelly explained, “The good thing with the series is that you don’t have to see any of the movies to get into this TV show, but if you are a fan of the movies, we paid you respect and have Easter eggs popping in the episodes.”

Will there be any outright crossover? Don’t expect to see it this season, but Blum hasn’t ruled out the possibility for the future. “That would require us to go into a second season and a fifth movie,” Blum explained, but noted it’s a “good idea.”

DeMonaco shared that the extended runtime of the Purge TV series will allow them to explore what happens in establishments like jails and hospitals during the annual insanity. For the series, DeMonaco says they’re trying to balance the action people love from the Purge films with commentary on class, gender, and socio-economic issues. 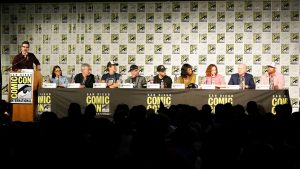 While the series primarily takes place during a Purge night, it also features a flashback structure, which allows the story to go “off-Purge” for the first time. The flashbacks also offer the opportunity to tell “four or five” stories at a time, exploring how people change before and after the Purge.

“We had 10 hours to explore what we couldn’t even attempt to do in the movie,” DeMonaco said. “That gives us the real estate to get into character more and why anyone would pick up a gun on this night.” Answering the common question about why we don’t see less violent means of Purging like hacking and white-collar crime, DeMonaco explained that those are simply less cinematic and smaller crimes often wind up left on the cutting room floor in favor of the more visually exciting alternatives.

What should you get excited about in the new TV series? Chavarria teased something called “The Gauntlet,” a Purge activity he described as the “American Ninja Warrior of Dead.” And if you were worried they’re going to have to tone down the action for TV, don’t.

“I can’t believe what you can put on basic cable these days,” said Kelly. “So no, we haven’t toned down anything. There will be lots of spills and chills.”

The Purge premieres September 4 on USA Network! IGN had an amazing walk, through “Purge City” to find out how to prepare for the night of mayhem. Check out how serious the actors running the store were!