Stephanie Pearson (Insidious: Chapter 2) plays a violent, haunted and heroin-addicted Afghanistan war vet. While staying in a drug treatment center, patients are brutally murdered one by one around her. Questioning her own sanity, she wonders if she could be the killer or is there a maniac loose in the hospital? 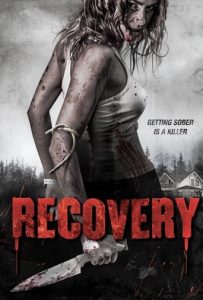 PTSD (post-traumatic stress syndrome) in this case, resulting from the horrendous things soldiers at war have to deal with, would have to be the worst thing ever. I’ve had some traumatic things happen to me and I have definite triggers, but nothing like what some of the brave men and women in the military deal with daily when they finally get to go home.

In the film Recovery, Ronnie Price (Stephanie Pearson) is a war veteran with PTSD who is sent to a drug rehab facility to get over her heroin addiction. She is assigned to Dr. Jessica Barnes (Hope Quattrocki) who is determined to give Ronnie the treatment that she needs and that many veterans never receive.

Ronnie isn’t happy about being there, but bonds with a few of the patients and it looks like things could get better. Sad little Katherine (Aily Kei) is catatonic most of the time, but her helpless nature gets under Ronnie’s skin and gives her someone to watch out for. Another is Meg, (Liz Fenning) who even though Ronnie attacks her one point, she lets it go and Ronnie feels like she has made a friend. there are other patients that not so friendly, but Ronnie can definitely take care of herself.

But since it’s a horror film, things can’t go well. Because of her massive blackouts and hallucinations, Ronnie’s violence leads to patients getting injured, which leaves her out of options and ready to be released by the hospital. Unfortunately for everyone, a huge winter storm traps them all in the remote location and things start to get worse. So much worse. 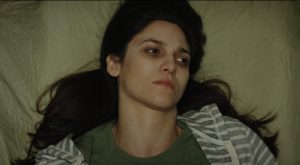 As the body count rises, Ronnie gets blamed because of her blackouts, but she can’t be in so many places at once, can she? When your own reality is the question, and you have blackouts, how can you help prove yourself innocent? Everyone around you sympathizes, but do they really?

Soon enough we figure out there are those in the hospital with worse issues than heroin, which is saying a lot. When the staff and patients start getting killed, the tension revs up and the blood starts to flow.

Dr. Barnes, Katherine, and Ronnie are the last ones left in a major standoff with the killer, in a sequence that is truly brutal. There are many well-used horror tropes involved here: isolation by bad weather, a remote location, no one coming to help, people on drugs with questionable behaviors. But these can be forgiven because it’s a very well-done film. Great horror makeup took it up a notch too. I always love good SFX! 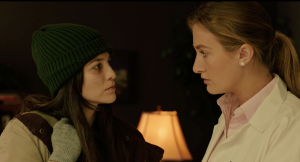 Stephanie Pearson does an amazing job bringing to life the angry veteran who only wants to be left alone. I believed her pain and anguish and it helped make this movie work. The whole cast was good, but overall Pearson was the standout for me.

Another reason the film worked was the cinematography, that took us up-close and personal and gave us a sense of intimacy with the characters. Darkened rooms, cool color tones and a lot of shadows, brought a sense of dread throughout. I did wonder where everyone else was though. There didn’t seem to be a lot of other patients or staff. Maybe they were on Christmas vacation? 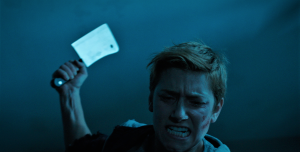 Regardless of any imperfections, Recovery is relentless and chilling, especially in the second half of the film.  I loved the dynamics between the characters, and when the film takes off- it really gets moving and a hell of a lot starts happening towards the end. Despite being full of many familiar horror film tropes, it still managed to have a great twist ending that left me surprised and a little sad.

Recovery is available June 4th on Digital and VOD