The haunt season is officially over for 2017. Sigh. I spend all year gearing up to it, and then it is over in what seems a flash. It’s only been one day and I miss it already!

Thankfully the Halloween world still exists year round in film, so, I have to say it was a lot of fun watching the new version of Hell House LLC: Director’s Cut. With additional scenes added and tons of insight into the haunted hotel story, you will love this different twist on the found footage subgenre.  If you happen to have caught this film on VOD, there is more now to be had on their DVD version!

Synopsis: “Fifteen people die on the opening night of a Halloween haunted house attraction. A documentary crew revisits the scene of the tragedy to find out what really happened.”

I know the found footage thing has been done to death, but I really like the Hell House version. Going inside the making of a haunted attraction from beginning to bloody end was cool, and the location was pretty creepy, all by itself. Having worked at a haunt and been part of the build, I understand the pride they felt when the sign went up and people were waiting in line. I’m glad none of my haunts had such bad endings, but it’s a horror movie. No happy endings here.

What I think made writer/director Stephen Cognetti’s version different from movies like Paranormal Activity or Blair Witch was the combination of many different film and video sources. Hell House LLC Director’s Cut is shot with a combination of film and video cameras including handheld camcorders, surveillance cameras, a head cam, and a cell phone, mostly shot inside Hell House itself. Additionally, they used footage from news coverage and interviews from the documentary crew that came afterward. 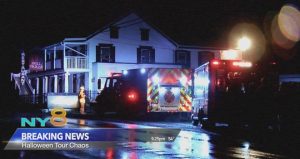 Why I liked it: Hell House LLC Director’s Cut is a mockumentary of sorts, with our haunt creators filming everything as they went along. But it didn’t feel fake. Not as much as other found footage I’ve seen, anyway. I really got the creeps while inside the hotel, with all the things that got on tape, whether alive or undead! The investigation as to what went wrong, alongside what they go through during set-up, gives us a little look into what is to come, but not why. The build-up surrounding the Hell House mystery is superb and they use that to mislead and manipulate us by dropping subtle hints about what’s really going on. The final reveal was amazing and I honestly didn’t see it coming, and I can almost always pick out the ending or whodunit too soon in horror films. Most of the film is comprised of the documentary and the footage of and leading up to the opening night. At that point, we see how everything goes wrong, which of course, results in the gruesome deaths of several haunt goers and crewmembers. 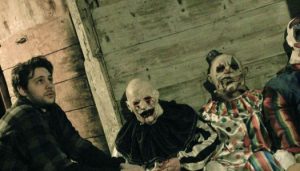 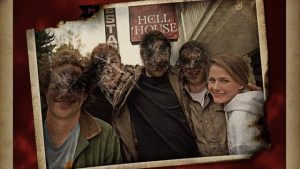 My least favorite part: Because we know right away that most of these characters aren’t going to make it to the end does remove some of the element of surprise from the film, but it also adds a layer of tension as we attempt to piece together exactly what really happened in Hell House. The interview with the former Hell House crew member and footage from the news coverage really helped offset that though and it still worked. I wish I had known a little more about the characters, so I could be more invested in them, but overall they were likable if not super memorable.

What happened that tragic opening night in the basement of the Abbadon Hotel? Something evil from another world, or a malfunction as the police try to say? You’ll have to watch the movie to decide for yourself. This is definitely something to add to any horror DVD collection especially if you are a fan of haunted places! To get the DVD of Hell House LLC: Director’s Cut – go to their the official Webpage!