I stood there with my VIP ticket in hand. My name on the list waiting for something I had only thought of as a pipe-dream in my youth; Meeting the members of Coal Chamber and seeing them perform live.

Coal Chamber is one of those prolific bands who broke onto the scene in the early-mid 1990’s, helping usher in what is now known as the NuMetal Era. While many have tried to compare Coal Chamber to bands such as; Korn, Ministry, & Spineshank, the truth is their sound is not comparable. Over the years they have managed to maintain their own unique sound and presence. Their lyrics, riffs, and beats singling them out, and making them a fan favourite with a following that is still going strong, even to this day.

Needless to say; I was giddy with anticipation. What would they be like, and what did they think of my beautiful Seattle?

I walked through the doors of the Showbox, a large beautiful venue with amazing architecture. My mind was racing, I was lead up the stairs of the building into the concert hall, where all the members stood waiting to meet all of us. 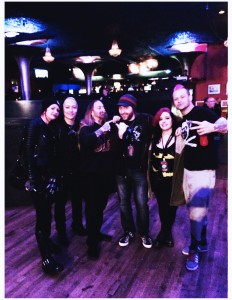 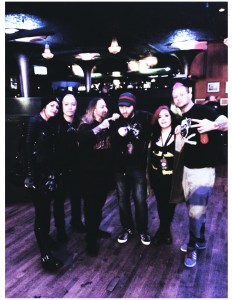 The first to come up and say ‘hello’ was Dez. An impressive figure with long hair, piercings, tattoos, sporting a badass Evil Dead hoodie. He smiled a genuine smile, and welcomed us to the show. Second to greet us was Mike Cox a very tall and energetic gentleman with the pinkest mohawk you ever did see. He said, “I’m a hugger.” and wrapped his arms around each of us as if we were at a family reunion or old friends greeting one another for the first time in years. For us fans, this was true in many ways, so his attention was beyond endearing. The third to introduce himself was Meegs. A smooth faced platinum haired man with a clam and serene expression. He smiled and asked us if were excited to be at the show. We all exclaimed our anticipation, and eagerness. He smiled again and said; “I’m a little nervous about tonight.” We all encouraged him in saying; “Seattle loves you. You’re going to kick ass tonight.” His smile grew to a wide grin. The last to introduce themselves was Nadja. She stood there; petite, with a flowered dress and her red hair wound into a simple side braid. She spoke of the Showbox and how beautiful the architecture was. How she had never played there before but was glad to be there. My friend, clearly lost in the fact that he was meeting his boyhood crush, exclaimed her name aloud and hugged her tightly. She was so kind, and hugged him back. (Aren’t fanboys adorable?)

We all cycled through pictures with one another until it was time to part ways. The show as about to begin.

We perched ourselves up in the upper corner of the left wing of the venue with Bloody Marys in hand, we watched the first of five bands, take to the stage.

Their riffs were powerful and vocals skilled. We were excited to hear this new band., a great opener for what was to be an amazing night full of fantastic artists. As a fellow musician I have hte utmost respect for them. To open up for such notable acts and to be able to hold their own whilst doing so…. Well that’s nothing short of phenomenal. The other bands held them in high esteem, each one commenting on these guys and their skills. It was nothing short of notable. I will be purchasing their music ASAP.

A great show. American Head Charge, like Coal Chamber took a hiatus for a short while. But you wouldn’t know it. Their fan base was stronger than ever, the crowd was energized for a Seattle Wednesday night. These guys took the evening by storm. I sat there feeling the thud within my chest with every drum beat.

What can I say? They rocked my fucking brains. It was my first time seeing them live, and I was not let down at all. I cannot wait to see them again. Soon.

Filter… Holy hell. They came out on stage and the music started to play, and it was pristine, vocals to drums, they were spot on perfection to the music I recall hearing as a tater-tot. It’s as if time has stood still for these guys and they haven’t lost their touch. I went in thinking Filter was an odd addition to the roster, I came out eating my words. Truly. If I get the chance to see Filter perform live again, I will take it. Absolutely.

Yes. My non-gods, yes. Not only were they just the nicest people ever to meet… but their performance was incredible. Watching Nadja perform was mesmerizing. Her twirls, twists, and jolts kept me enthralled. Dez, Meegs, Mike, the whole fucking band was intense. I cannot wait to see them again, and I am nothing less than thrilled that they are back together.

For those who haven’t been keeping track; Coal Chamber has been making webisodes whilst on their tour.

Check it out here