“Roar”: The Most Dangerous Movie Ever Made 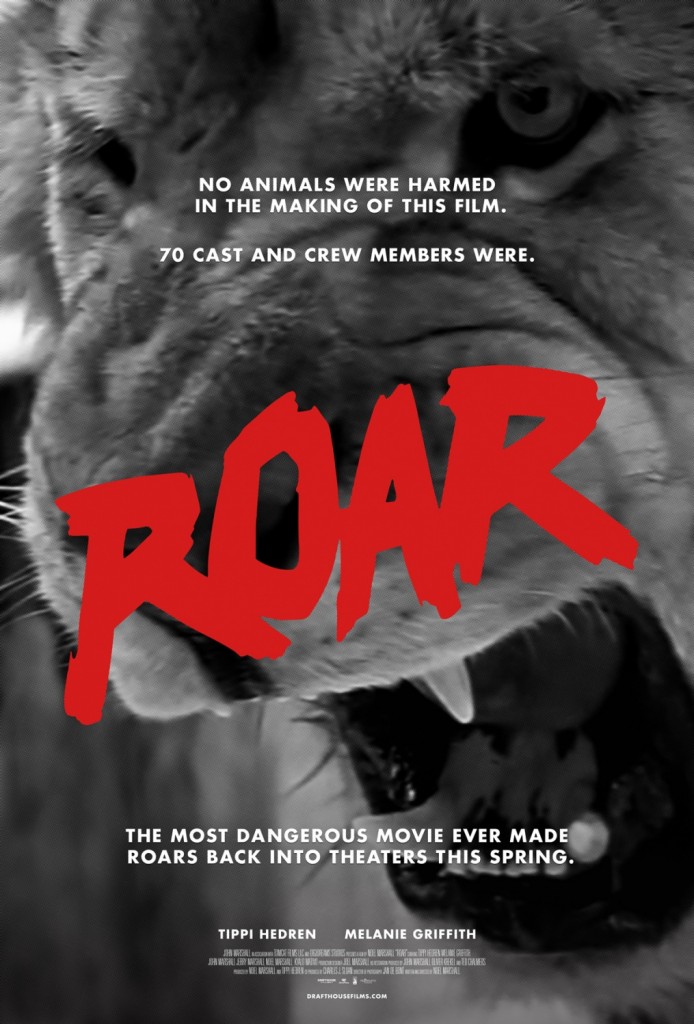 When you ask horror fans to rattle off some of the most disturbing films ever made, you get titles like Cannibal Holocaust, Salo: 100 Days of Sodom, and A Serbian Film. While these movies, and dozen more, certainly are terrifying to behold, their creations weren’t significantly hazardous.

Next, ask a film fan to list the most dangerous movies ever made; expect to hear titles like Apocalypse Now and The Island of Dr. Moreau, both of which put members of their cast and crew into mortal peril. While rare, deaths on film sets do occur; the most notorious examples include three actor fatalities while filming The Twilight Zone Movie (1983) and Brandon Lee’s tragic shooting death on the set of The Crow (1994).

While films can be disturbing to view and dangerous to produce, there are a few movies that occupy a Venn space between these distinct groupings. The Texas Chainsaw Massacre is an excellent example of such a film, as it’s unnerving to behold with a backstory fraught with cast and crew injuries. 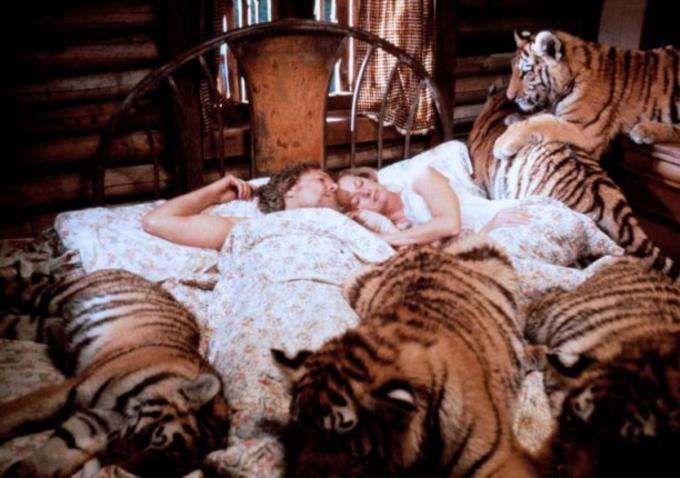 But perhaps the most disturbing and dangerous film ever produced is one that most mainstream moviegoers are completely unaware of; Roar was a major film production (and a major financial failure) that never saw the light of day in the United States. Not only is the content of Roar incredibly alarming, the filming resulted in dozens of serious injuries—some nearly fatal. The thing that sets Roar apart from the pack, making it singularly unique and disturbing, is that fact that it’s real—mostly.

Official Synopsis: An unprecedented and wholly unpredictable action-adventure, Roar follows wildlife preservationist Hank (played by The Exorcist executive producer Noel Marshall), who lives harmoniously alongside a menagerie of untamed animals, including cheetahs, elephants, lions and tigers on a preservation in the African plains. When his wife Madaline (Tippy Hedren, The Birds) and children arrive for a visit, a long-brewing battle for dominance between two lions erupts and threatens their very lives.

If this sounds intriguing, there’s good news: Last April, Drafthouse Films made a deal with Olive Films to resurrect Roar from the forgotten annals of cinema; the film will see a limited theatrical release (Roar is currently touring America) with VOD and a Blu-Ray/DVD slated for Winter 2015. 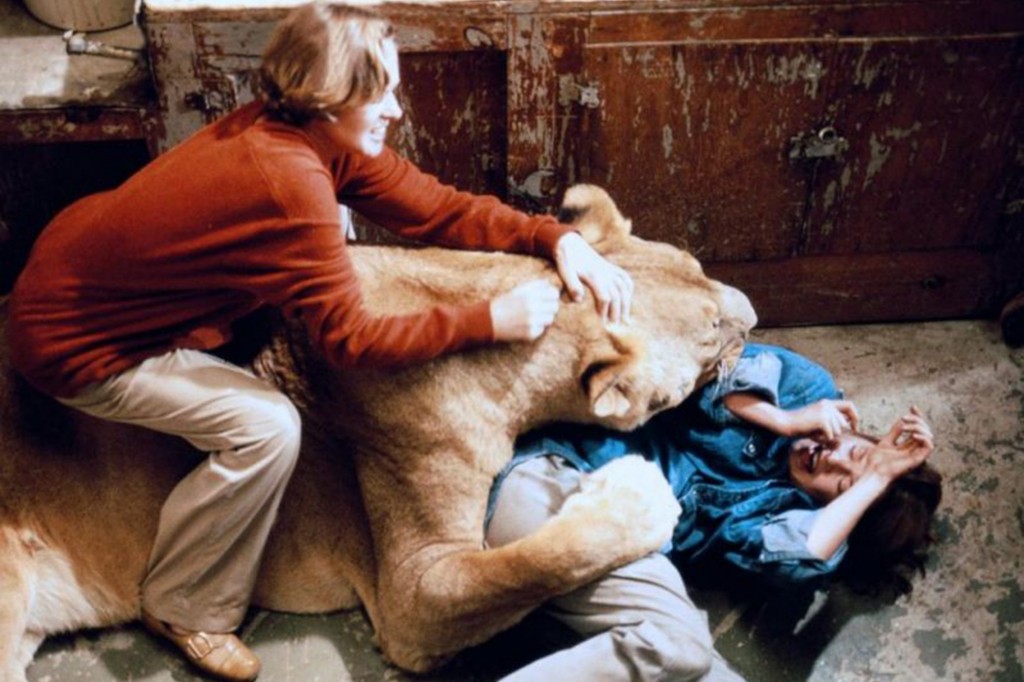 Roar began while Tippi Hedren and her husband/manager Noel Marshall were shooting in Africa. After wrapping production they toured several safari wildlife preserves and were struck by the scene of an abandoned plantation house overrun by a large pride of lions. The image took root and inspired the epic eleven-year journey to create Roar.

Hedren and Marshall quickly became devoted to raising awareness about the overhunting of wild lions, tigers and jaguars, as well as the inhumane treatment of big cats in captivity. They were convinced Roar would raise awareness about what was fast becoming their purpose in life. Upon approaching animal trainers for support, they were told their idea was a suicide mission and were dismissed as “brainsick” and “completely and utterly insane.”

Undaunted, Hedren and Marshall soon learned that big cats were extremely territorial and would never coalesce unless they were raised together. In response, they began covertly adopting and breeding lions in their lush Beverly Glenn home. For six years, Hedren and her daughter—the emerging young actress, Melanie Griffith—along with Marshall and his sons lived, slept and ate with a growing pride of lions inside their home. 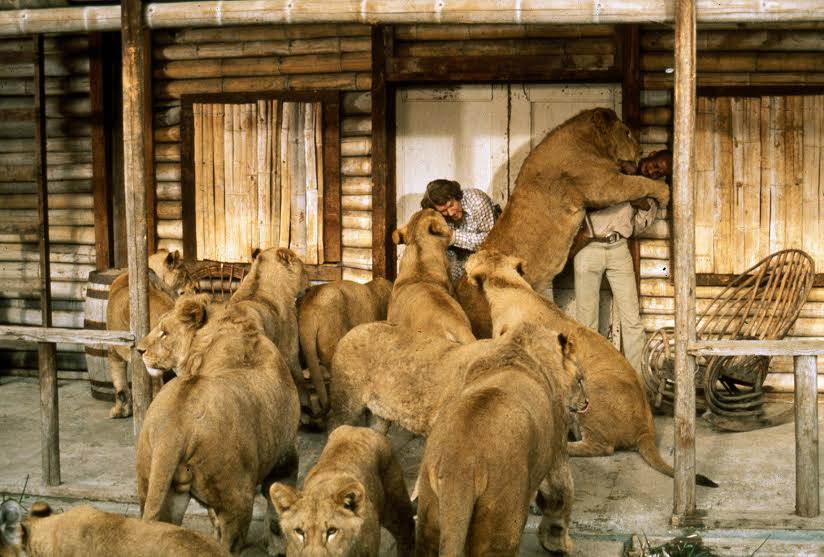 It’s easy to assume that Marshall and Hedren had lost touch with reality, a hypothesis further bolstered by the 11-year debacle that followed. This distorted reality permeates almost every aspect of Roar. I mentioned previously that the film is a true-ish story: While Marshall and Hedren play “characters” named Hank and Madiline, their real-life children, Melanie (Griffith), John (Marshall), and Jerry (Marshall) “played” the couple onscreen kids—named Melanie, John, and Jerry. This makes it clear that Marshall and Hedren were unable to fully differentiate between fact and fiction.

“I cannot believe this film exists.”

Serious on-set injuries during the production of Roar included:

But injuries weren’t the only obstacles Marshall and Hedren faced while producing their passion project. Other unbelievable on-set and behind the scenes catastrophes included:

The production became so overwrought with dangerous obstacles, crew began to speculate that Marshall’s participation in The Exorcist (which he executive produced) had brought that film’s infamous “curse” to the set of Roar.

Tim League does an amazing job of putting Roar into proper historical context:

When the movie finally debuted in 1981, Roar was deemed by Variety as the “most disaster-plagued film in the history of Hollywood.” It was also a financial disaster. Fortunately, the passage of time affords us the perspective to view Roar for what it truly is: the most epic and amazing animal thriller ever made. It plays out like a fever-dream Disney movie. The lighthearted slapstick of the surface masks one of the most intense, white-knuckle, nail-biting thrillers ever seen. The cast is in constant mortal danger as dozens of adult lions “improvise” around them. At numerous times Marshall drips blood as he fends off ferocious advances from jaguars and tigers alike. Melanie Griffith’s real-life mauling is on display in the final cut. A jaguar licking honey off Tippi Hedren’s face was an untested idea that could have easily ended very, very badly. Knowing the backstory of the production, you can see perpetual terror in the eyes of the cast as an army of lethal predators close in around them.

Noel Marshall and Tippi Hedren pulled off the impossible: For 11 years they crafted a movie that everybody said couldn’t be made. And in so doing, they managed to contribute significantly to the methodology for humane treatment of big cats in captivity.

We are extremely proud to expose Roar to a whole new audience and salute its esteemed place on the “Holy F***ing S***” shelf for all the right reasons. 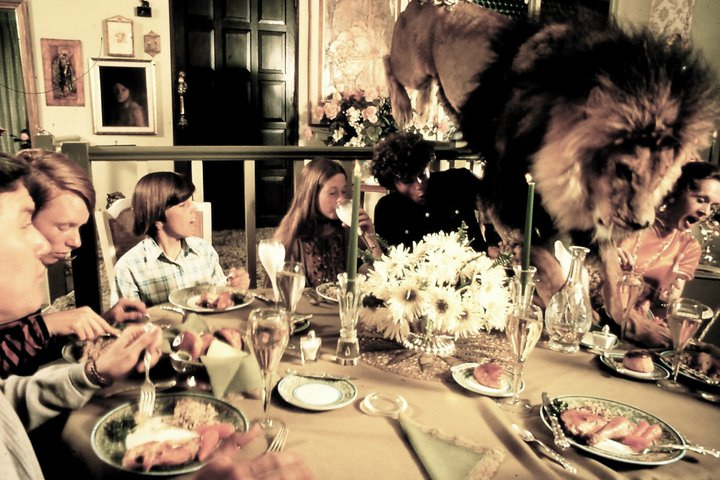 Does Roar sound like a movie you’d like to see? Have you ever heard of a more outlandish or dangerous production? Sound off in the Comments section! 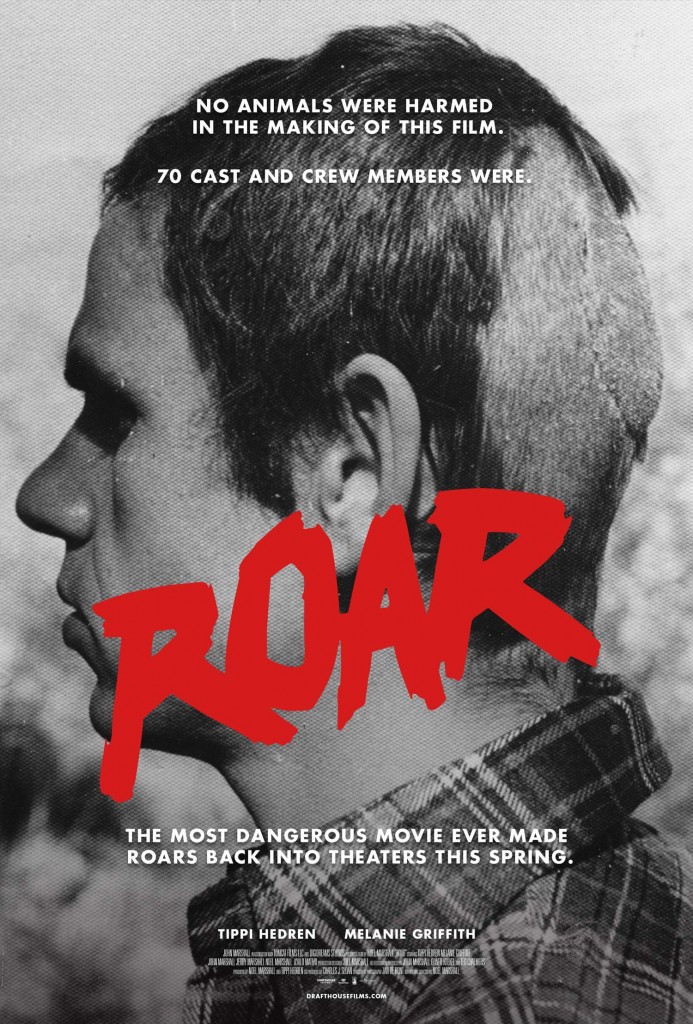