Outcast is the newest slice of comic book horror turned TV show from Walking Dead creator Robert Kirkman. While both great shows, The Walking Dead and more recently Preacher just can’t live up to the comics due to the restrictions and censors of being on a basic cable network. Outcast, being on premium network Cinemax, doesn’t have this problem. The premier episode starts balls out and only ratchets up the intensity from there. Literally the first thing you see after the title sequence is a child violently bash his head into a disgusting large bug on a hard wall and eat it. Blood and goo run out of his mouth. It literally made me sick to my stomach, the way horror should be. He then bites open his fingers to the bone. 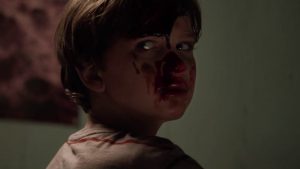 Outcast follows the story of Kyle, a man who lives in squalor in a run down house in a shitty religious West Virginia town. He has isolated himself there for the past five months since returning to town, where he grew up. His mother was extremely abusive and would beat him and lock him in the pantry when he was a child. This is because she was possessed by a demon. It seems demons have been after Kyle all his life. They also tormented his wife Alison because of him and in an incident that hasn’t been fully explained yet Kyle was blamed for hurting his young daughter and lost his family. Looking for answers, Kyle ends up confronting the possessed child from the beginning, beating the shit out of him, and ultimately exorcising the demon. Exactly why the demons follow Kyle and possess those around him is unclear, but I’m sure we’ll learn more in the coming weeks. 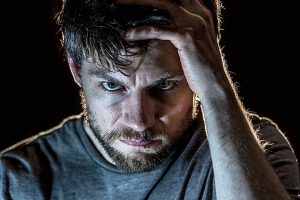 The look of the show is excellent. It has a cool modern vibe, while managing to make you feel uneasy and fill you with dread. The possessed boy is extremely creepy and the actor gives a great performance for a child. The ways he scratches and contorts his body are a sight to behold. It makes me hope he gets repossessed so we can see more of him in the coming weeks. Fans of The Exorcist will love this. While I would have appreciated more gore in the pilot, the preview for next week’s episode suggests the gore is coming in buckets, or more accurately sacks. While this pilot episode is available to watch online, the only way to watch the rest of the series is to subscribe to Cinemax, so if you’re not a subscriber I suggest calling your TV provider because you’re not going to want to miss this demon possession thrill-ride.