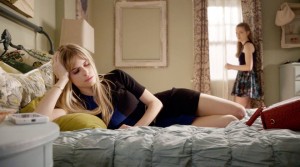 The beginning of the episode focuses on the towns reaction to Riley’s tragic death and Tyler’s deadly ‘crash.’ Emma and Brooke both blame themselves for leaving Riley at the police station, while the sheriff also deals with his own guilt of letting this happen at a place that was supposed to be safe.

Emma’s mother, Maggie has the fun job of piecing together Tyler’s body parts that have been burnt to a crisp. However, one big piece is missing from the Tyler puzzle, and that is his head.

The mayor (Brooke’s dad) and the sheriff have a news conference to help calm the public and go over what the police does and does not know. Tyler is automatically blamed for the deaths, except for Rachel’s. This ignites Audrey, who wants Rachel’s death to be bought to justice.

Will and Jake think they’re in the clear with Nina’s videos after finding out about Tyler’s death. However, they devise a plan to use them as blackmail against the town’s most prominent figures as a way to collect a large sum of money for Will’s college funds.

Emma receives a mysterious package in the mail, this time it’s an old yearbook from 1994. Inside, she finds her mother’s picture and the pictures of all of Brandon James’ victoms perfectly cut out. On the last page of the cutouts, is the picture of her father (which in a previous episode, we find out was the only survivor of the massacre) but his face is scribbled out with something written above it about the place Brandon’s mask was made.

Emma shows up at Noah’s work with the yearbook to show Audrey and Noah. Noah informs Emma that Brandon’s mask was specially made for him through multiple surgeries. The hospital where Brandon had his surgeries closed six years earlier.

Audrey and Emma agree to go investigate the abandoned hospital in hopes of finding some answers. They both speculate that Tyler really is the killer and push their fears to the side as they head inside. They then stumble upon the killer’s lair, or staged lair, whichever you want to call it, where they find x-rays of Brandon’s head. Also, in the middle of the room, covered with a tarp, was a decaying pig. The pig was missing it’s heart, which was the one sent to Emma’s mother. 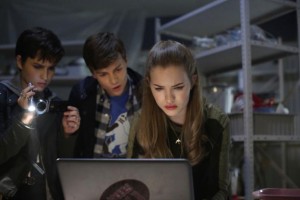 Noah shows up at the hospital, scaring the crap out of Emma and Audrey, wanting justice for Riley’s murder. Emma finds a binder with pictures of all different kinds and styles of masks for Brandon. Hanging from the ceiling are pictures of Emma and the missing photos from the yearbook. Emma also discover’s Nina’s laptop that the police have been desperately searching for. Emma opens up to find most of the files locked with a password. She uses Audrey’s camcorder’s memory card to try to transfer the files. The trio hears some one coming and Emma isn’t able to finish the transferring process. 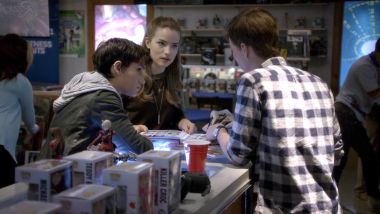 On the way out, Emma sees the Brandon James mask on top of a shelf. Emma reaches for it and accidentally knocks what is behind it over. What then is lying on the ground is Tyler’s rotting head.

The stranger coming ended up being the sheriff who gives the teens a lecture about not calling them first and tampering with evidence. After leaving the station, Noah and Audrey race home to look at the files from Nina’s computer. Unfortunately, they find most files are empty except for one which contained a video clip. After opening it, they see it’s Will and Emma about to have sex. When Noah tries to close out of the video, the computer automatically uploads it.. to like the entire population of their town.

I found this episode to be rather interesting, and I enjoyed unlocking more clues to the mystery behind Emma’s parents and Brandon James. Did her dad aid the killer? Or perhaps, was Emma’s dad the killer all along and just framed Brandon for everything? I’ve also considered Emma’s mom to be a suspect with the present day killings as well. Or could it be Mr. Branson? He seems like a possible suspect as well.

The thing about this show that is really bothering me though is the amount of makeup Will and other characters are wearing. Holy hell, does his face look orange. But I have noticed this is a common trend among MTV shows but it really grinds my gears. Oh well, I’m not really sure what I expected with it being a show focused on teenagers.

The previews for next week’s episode look promising and I hope the series keeps heading forward at a steady pace.