Be careful who you call forth…. 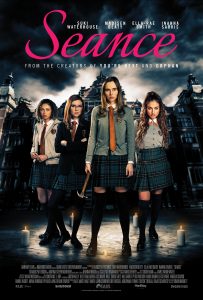 If you take Mean Girls and combine it with Black Christmas, you’ll get an idea of what Simon Barrett’s directorial debut, (which he wrote too) Seance is all about.  Don’t take that statement wrong, I love both films, and that was the vibe that hit me while I was watching it. Along with familiar tropes like the obvious seance, there are girls getting killed off one by one, and a ghost from the past haunting the present.

Cliché or not, it worked for me.

This creepy and entertaining horror film passes the Bechdel Test because most of the time it’s just girls interacting with girls. Mashing up slasher flicks and ghost stories, Seance is filled with incredibly bitchy females and a cold headmistress to boot. There are so many hateful girls that it was hard to decide who I wanted to be killed next.

Synopsis: Six friends call forth the spirit of a dead former student who reportedly haunts the halls of the prestigious Edelvine Academy for Girls.

“I have long wanted to make my own variation of this horror-mystery narrative, but with the added goal of weaving in supernatural elements, as ghost stories tend to by murder mysteries as well. 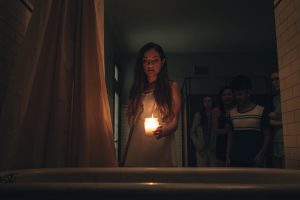 The opening finds us with a group of schoolgirls performing a very Bloody Mary type ritual as a prank, to summon the school’s alleged ghost of a student who committed suicide. The joke does not go well and ends with the very real death of one of the girls, Kerrie, (Megan Best) who mysteriously falls out of her bedroom window.

It isn’t long before a new student comes along to fill the vacancy at Edelvine Academy for Girls. The new student is Camille (Suki Waterhouse) and she seems perfect for the school. The clique of girls that run the place; Alice, (Inanna Sarkis) Lenora, (Jade Michael) Bethany (Madisen Beaty) and others, the very ones who did the earlier ritual, give Camille a hard time right off the bat. Not even missing a beat, Camille punches Alice and proves she is not one to mess with. All the girls get detention and are told to help scan a bunch of books, giving them lots of private time in the basement library to cause more trouble. 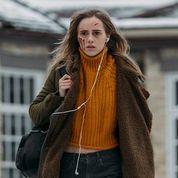 Camille has a rough start.

Not only is she shunned by the cool girls, but her room also seems to be haunted, with doors creaking open, lights flickering, and she has horrible nightmares. Kind of to be expected – she is sleeping in the same room as the deceased girl. Luckily for Camille, there is one nice girl in the bunch. Helina (Ella-Rae Smith) befriends her and helps her get settled. Helina was friends with Kerrie too, is sad about her death, and would like to know what really happened to her schoolmate. 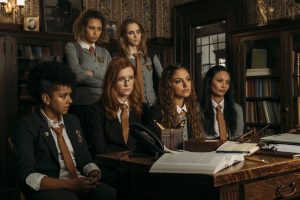 Before you know it, the mean girls decide it’s time for another seance. (Really? They didn’t learn from the first one?) This time using a clever lipstick planchette to see if they can get written answers from Kerrie. With this very girly device, they ask what happened to her and get the answer “murdered.” The mystery now needs to be solved and they all seem to be willing to work together towards that end. 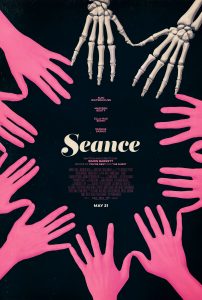 It isn’t long before there are more bodies. And now Lenora has disappeared. Many of her belongings are gone and an unusual symbol written in what looks like blood was drawn on her bed. Yet one more seance points the planchette at Camille, who has an alibi but can’t really tell anyone about it. She may not be who you think she is, but she is not a murderer.

Most of the characters are a bit underdeveloped, but they weren’t much liked anyway. The girls getting knocked off are predictable, but happily, there is a twist involving the headmistress’s son Trevor, (Seamus Patterson) and one of the girls, that I only halfway saw coming. When you mix jealousy with entitled girls, people always seem to get hurt.

One of my favorite parts of the film is the very sweet and surprising relationship between Camille and Helina. I watched this with my daughter, and I saw it coming, but she didn’t. Afterward, she said this was now her favorite horror film. 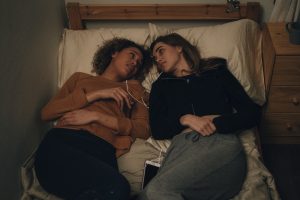 A meta and supernatural horror flick with an inventive and timely twist at the end, Seance rises up a notch from where it could have been with a different finale.

Decent acting, cool practical SFX, and a really great soundtrack keep it from being a mediocre copycat film. We got some real fighting and blood towards the end, which is what most horror fans are looking for, so true aficionados of slasher films will not be disappointed.

From RLJE Films – Seance comes to theaters, on-demand, and digital on May 21st, 2021, and will be followed by a Shudder release later in the year.