The Shed is an effective film that tells a relevant story about bullying and retaliation. A bit rough around the edges in parts – but overall the film is a success and asks the question: “Who are the real monsters?” Bloody, terrifying and thought-provoking in equal measures, this is definitely a film for our times.

Bullying is a popular subject in horror films, and a hard one to capture successfully. Monsters are real in the sense that there are terrible humans out there. They destroy other people’s lives, in the name of race, deviance or just the fact that someone is different and thought of as weak. Many times, the bully is being abused. Those monsters shape who we become. Sometimes for the better and making us stronger, but unfortunately many times, for the worse. 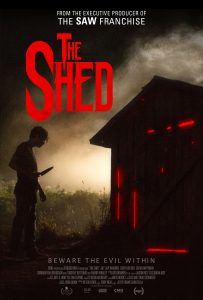 Writer/director Frank Sabatella describes his characters perfectly. “Relatable misfits who are learning that just beneath the placid innocence of their homogenized suburban world, a nightmare is lurking. The monster lives in your own backyard. This idea presents an opportunity for the misfit loner to succeed. Against all odds, he could break from his stagnant existence by saving his friends, family or the girl he loves from sudden death and overcomes his own literal and metaphorical demons.”

We have all thought about revenge sometimes. It may only be something small like getting someone back for a funny prank, but people who are badly bullied can go to a very dark place. It can leave a person angry and empty. Hiding your feelings becomes a way of life, and that takes a toll on anyone.

The Shed begins with a bang- a frightening scene where a man is attacked by a ravenous vampire, only to now become one himself as the other creature of the night disappears at the break of dawn. The new and very confused monster hides in the first place he finds: a garden shed. 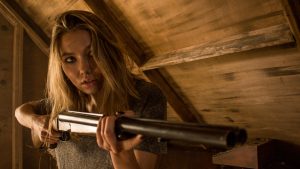 That shed belongs to Stan (Jay Jay Warren) and his abusive grandfather. (Timothy Bottoms) Stan has been living with him since his parents passed away. We see how unhappy he is when Stan dreams of a wonderful family breakfast, where his smiling parents tease him about kissing a girl.

It is easy to feel sorry for Stan, watching him often in the dreamlike sequences of happiness, his trouble with local cops and the fact that he is constantly defending his best friend Dommer (Cody Kostro) from the bullies at their high school. LIfe is exhausting for this poor kid. Never feeling good enough, he often dreams of a life with his crush Roxy, (Sofia Happonen) who as a child was his good friend. The film captures the idea of what it’s like to be an outsider and the place your brain can go when you have been traumatized. 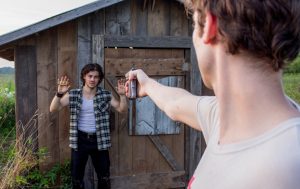 His life is difficult with bullies at school and a bully at home, but nothing will ever be the same after he meets the monster living in his shed. I mentioned earlier that the monster is a vampire. This is not a vampire that sparkles or is anything that would be considered romantic. This is a vicious, bloodthirsty, evil vampire and I loved the SFX that brought him to life. This is one of my favorite looking vampires to date!

After Stan finds the vampire he unfortunately lets the dog (why always the dog?) go in the shed, and maybe not so unfortunately, allows his grandfather to go inside to avenge the dog’s demise. The vampire is burned when light touches him, so he stays inside, but he is very strong and does maximum damage to anyone that enters his new little home. 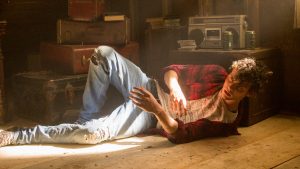 When Stan tells his friend Dommer about the vampire, his reaction surprises Stan. Dommer is thrilled! He wants to use this new toy as their personal hitman. To get back at everyone who ever hurt them. This is not a healthy idea, things go badly, and well, you’ll have to watch the film to find out what happens.

While not perfect, The Shed is an entertaining and gory horror film, that takes on a serious subject. I loved the vampire and the metaphor of the inhuman monsters is well-done. Most of the acting was believable – except for the local police, who were a bit stiff. That dialog could have definetly been worked on. Although I must admit, I really enjoyed veteran actress Siobhan Fallon Hogan as Sheriff Dorney. She was a fun choice. 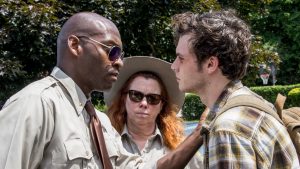 To conclude, I’d like to share a quote from the producer – Peter Block – who really wraps up what this film is all about. “Sometimes movies offer us an escape from reality. And sometimes they reflect the reality we face every day. THE SHED is a film about monsters, both real and metaphorical, both human and inhuman. And if we know one thing it’s that monsters create monsters.”

THE SHED is available in Theaters, VOD and Digital HD
on Nov. 15, 2019, from RLJE Films