It has been 12 years since the last Japanese-made Godzilla film, Ryuhei Kitamura’s divisive Godzilla: Final Wars, hit the big screen. This is the longest hiatus Toho studios have ever taken in the production of the series. In the wake of the commercially successful (though also critically marmite) 2014 American-made Godzilla, Toho announced that they’d be making their own new entry, which saw release in Japan this summer and is due for limited stateside release this month. It is at least as controversial among viewers (and reviewers) as the previous two entries, though for very different reasons. 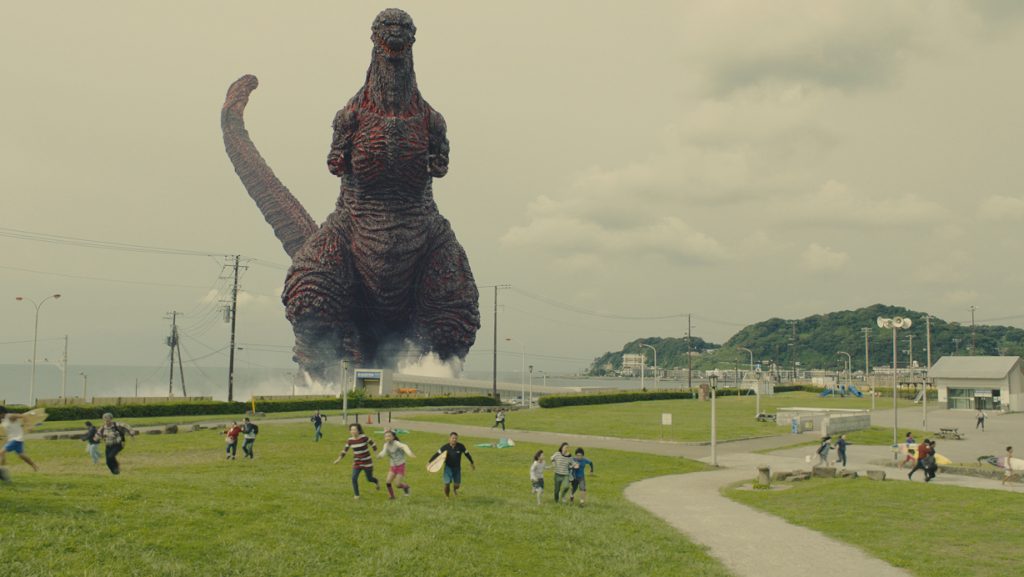 Expectations were very high for this movie. It was written and directed by Hideaki Anno, creator of the beloved anime series Neon Genesis Evangelion, and it’s co-director and special effects supervisor was Shinji Higuchi, director of the recent live action Attack on Titan films and a beloved figure among fans of Japanese giant monster movies for his work as special effects director on Daiei’s superlative 1990s Gamera trilogy (for anyone with even a passing interest in the genre, Gamera: Guardian of the Universe [1995], Gamera 2: Advent of Legion [1996], and Gamera 3: Awakening of Irys are must-watch titles). And genre aficionados dissatisfied with both Final Wars and the American film were making bold pronouncements long before the movie’s release about their expectations that Shin Godzilla would right those movies’ perceived wrongs.

Frankly, after only a single viewing (at the Los Angeles VIP premiere on October 3rd), I find it hard to pin down and summarize my own opinion on the movie. I came away from the screening, like most of the other viewers I spoke with, with a mixed-positive response. I can say, however, that some of the more simplistic criticisms I heard over the following day or so (“too much talk,” “not enough Godzilla”) grated on me in ways that helped me see just how much I appreciated certain elements.

To start with, the movie is overtly political, to a degree the Godzilla series hasn’t really been since the original 1954 film – but also to the point of being pedantic at times. It includes some scathingly satirical commentary on the Japanese government’s slow response to recent disasters. It is somewhat more earnest, though, in its commentary on Japan’s place on the world stage and limitations on the country’s military powers (there is a thought-provoking line about the term “post-war Japan,” pointing out that “post-war” is by definition a perpetual state). It is these elements which have led some critics to decry the movie as a nationalist – bordering on fascistic – screed (some have even hyperbolically compared it to a Trump rally). While it will take multiple viewings to really unpack all of the ideological elements at play in Shin Godzilla, I saw more nuance at play than some critics are acknowledging; the narrative seems to be attempting to navigate shades of grey more often than it is declaring a hard-lined black and white stance.

Still, regardless of one’s take on the movie’s politics, that fact that it has conversation-starting political content is a refreshing change of pace from the last few Godzilla flicks. Political allegory and social commentary don’t need to be at the heart of every Godzilla movie, of course, but when the series disregards those aspects for too long, it’s hard not to feel that something important is being lost. Godzilla: Final Wars satisfies a lot of fans who are only looking for fast-paced action, but its shallow, hyperactive narrative is the antithesis of the more socially conscious approach associated with the classic Godzilla series. Advertising for the 2014 Godzilla suggested a return to the monster’s roots as a charged political allegory and an embodiment of the horrors of war, but the finished product ended up in some ways more reminiscent of the “superhero Godzilla” films of the 1970s (though above all else it seemed to take a lot of its cues from the above-mentioned Gamera: Guardian of the Universe). 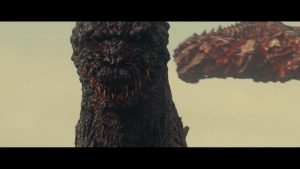 A closer look at the King

Shin Godzilla completely rejects the trope of a heroic Godzilla, trying instead to recapture the tone of Ishiro Honda’s original 1954 film, and creating the most nightmarish incarnation of the character ever (even surpassing the terrifying semi-supernatural version presented in Shusuke Kaneko’s 2001 Godzilla, Mothra and King Ghidorah: Giant Monsters All-Out Attack). Never before has a Godzilla displayed such awesome destructive power (again, it surpasses even Kaneko’s film, in which one character mistook the effects of Godzilla’s ray for the explosion of an atomic bomb), nor has the presentation of the monster – despite his status as a nuclear mutant – strayed so far into the realm of body horror.

I’m going to stay spoiler-free here, but I must point out that those changes to Godzilla’s nature, his appearance, and his powers are another aspect that has put off a lot of long-time fans of the character (though let’s remember that previous movies have had Godzilla use his ray to propel him in flight, transform himself into a living electromagnet, and emit a nuclear pulse from his torso, so additions to the monster’s powers are hardly a new trend). Were these changes introduced in a more casual or light-hearted fashion, I might share that distaste, but here they feel completely in-keeping with the tone of the story. I wouldn’t want most of them to become fixtures of the series from here on in, but in a movie that is doing a lot to break the mold, I find such experimentation entirely appropriate. 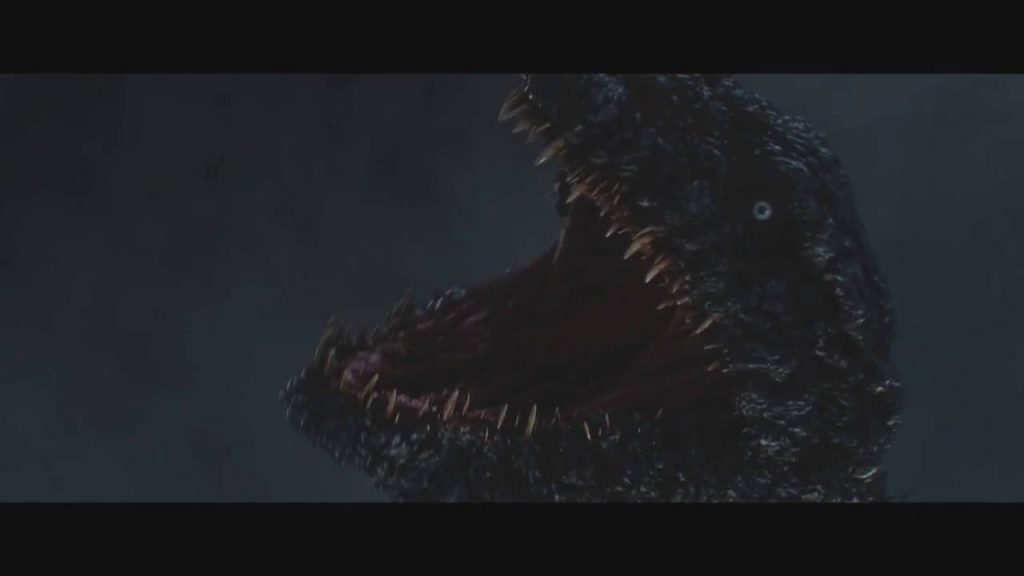 So, that’s all addressing how it works as an entry in the Godzilla franchise. What about the question of how it is as a movie?

For a lot of the audience, the major draw of this film is its special effects sequences. While they can seem few and far between, when they occur they are more than enough to justify the price of a ticket. Higuchi has employed a primarily CG approach, and accomplished some of the most convincing and visually stunning effects sequences in the history of the series. The effects photography is consistently dynamic, and at times quite beautiful.

But there are long stretches between those effects scenes, and those scenes involve a lot of talking. For some viewers, the dialogue-heavy nature of the movie has been a turn-off. However, that dialogue is always advancing plot or theme, and raising interesting ideas and questions, it all moves at a very quick pace, and in a few places it is quite funny. There’s a lot to take it – at times it can be a little exhausting – but it never bogs down. 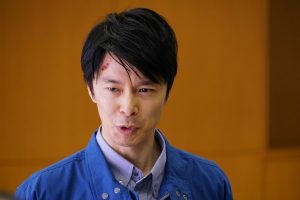 The cast is largely very solid. The most developed character by far is Rando Yaguchi (Hiroki Hasegawa), a young government official who struggles against the constraints of bureaucracy in a time of crisis. Hasegawa gives a restrained but passionate performance; he is constantly tasked with moving the plot forward, but still manages to imbue a dry humor into his smaller character moments.

Yaguchi spends much of the movie in a tense alignment with Hideki Akasaka (Yutaka Takenouchi), Aide to the Prime Minister, who shares Hasegawa’s frustrations but is more ingrained in the system and less willing to rock the boat. Although Akasaka is a less developed character than Yaguchi, Takenouchi provides a lot of nuance to a role that could have been very flat.

Satomi Ishihara’s portrayal of Kayoko Anne Patterson, Special Envoy for the US President, has drawn a lot of criticism from Western audiences. Patterson is supposed to be American-born and a native English speaker, but Ishihara’s English-language delivery is stilted and heavily-accented, and it is clear that she doesn’t speak the language comfortably, much less as a native tongue. This is a stark contrast to the easy, naturalistic way in which she rattles off her Japanese dialogue. She does, however, often convey a convincingly American attitude. Alas, the character is saddled with an under-developed arc, which feels forced into the movie’s third act.

There are a number of strong performances from the supporting cast, but most of these characters are given very little development beyond how they do their jobs. The major stand-out here is Mikako Ichikawa, who plays Hiromi Ogashira, Deputy Director of Nature Conservation Bureau and the most prominent member of Yaguchi’s eccentric anti-Godzilla research taskforce. Ichikawa is only featured prominently in a handful of scenes, but she is a constantly weird and engaging presence hovering at the edges of the action.

Perhaps the most arresting visual aspect of the non-effects scenes is the recurring use of wide angle lenses for close-up shots, often with the featured character at or near the center of the frame, with the eye-line very close to the lens. This creates a sense that characters are constantly on-the-spot, which helps maintain the tension, but also serves comic moments very well. 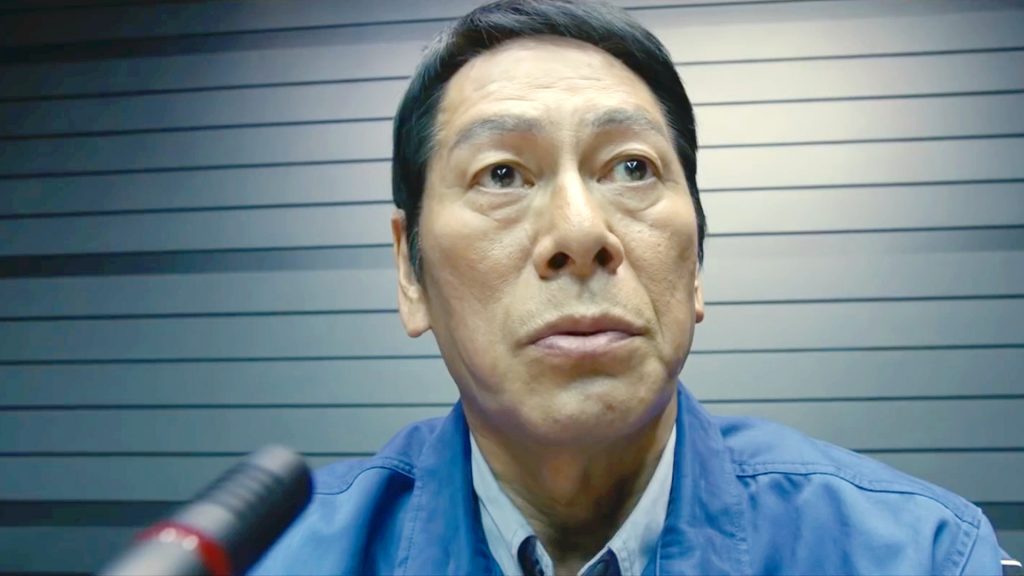 The score is an outstanding collection of dramatic and experimental cues by Shiro Sagisu, interwoven with classic cues composed by Akira Ifukube for previous Godzilla movies, incorporating recordings that date back as far as 1954. It’s an interesting juxtaposition of sounds, and it allows the movie to feel fresh and contemporary without abandoning ties to the past. I suspect that I may even end up revisiting the soundtrack album more often than the movie itself.

In all, I wouldn’t hesitate to recommend this movie to Godzilla fans or to anyone who is interested in science fiction and fantasy as social and political commentary; it is designed to inspire reflection and conversation. For those who are looking for more of a simple rollicking good time, I’d say that the effects sequences and dynamic visual and editorial styles are worth checking out, but only if you’re comfortable taking in a lot of information-packed dialogue.

So, there’s my take on the latest Godzilla flick! For more about all aspects of horror, keep checking out The Blood Shed, and, hey, maybe check out our Facebook page!