Well that was pretty beautiful, in the most odd way possible.

Written and directed by: Kevin Kopacka

HADES, which so far has screened all over the world (including the Cannes Film Festival in France), is a film that admittedly, I hadn’t heard much about until the director was kind enough to pass a screener link over to us. He described the film as having been influenced by Italian horror and gialli films from the 70’s, and this shows very early on in the film. The lighting looks similar to that of something like Suspiria, with super vivid colors of all sorts, and overall ridiculously beautiful cinematography. 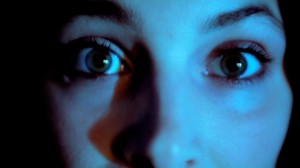 The film is only about fifteen minutes long (including the end credits), but during that time-span, the film manages to provide its audience with some crazy unique methods of storytelling. Aside from the outrageously beautiful lighting and near-perfect music score, HADES features very unique, grainy-looking text that fills the frame from time to time in order to expand upon the story. And on top of that, there are also a few moments that look to have been shot on Super-8, which really adds to the vibe that Kopacka was looking to achieve.

In just fifteen minutes, HADES pulls off a lot of crazy shit – the kind of stuff that we here at TheBlood-shed always enjoy. It took me awhile to figure out what to give this film on the knife scale rating, and I initially had a 3 and a 1/2 in mind, but I decided to go with 4 due to the film’s incredible artistic tone. This is a remarkably memorable and unique giallo-inspired effort that many will probably consider an artistic masterpiece. If gialli films are your thing, you’ll probably have to agree – this nightmarish thrill ride is the perfect homage to the timeless classics of Italian horror.