"It takes a hunter to catch a killer." 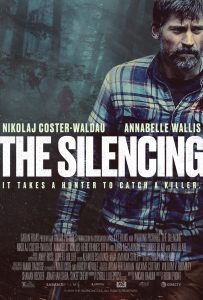 Though The Silencing is a very bleak story, it is beautifully shot and a suspenseful, well-crafted thriller.

Synopsis: A reformed hunter and the local sheriff are caught in a deadly game of cat and mouse when they set out to track a killer who may have kidnapped the hunter’s daughter five years ago.

There is a lot going on with the characters in The Silencing, but I did not completely understand who most of them were inside. As a director, Robin Pront brought a considerable amount of life to everyone, but I think other than our main character Rayburn, (Nikolaj Coster-Waldau) none of them had enough backstory to truly help the audience recognize their motivations.

What made this film work for me was the strength of the cast themselves. Even those characters that lacked enough backstory, were portrayed by actors that gave their all to their parts. 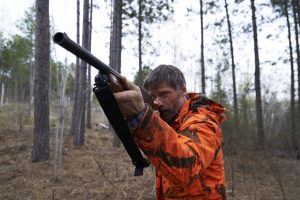 Nikolas Coster-Waldau as Rayburn is a man haunted by the past and I saw that in his every movement, and the expressions on his face. He was amazing in Game of Thrones and his incredible acting pretty much saves this film. It was easy to feel for the dude- he’d been through a lot.

Life has taken a once ruthless hunter, now a conservationist, down the path into alcoholism. After his daughter Gwen mysteriously disappeared 5 years before, he lost everything important to him. His marriage fell apart and now he is a lonely shell of the man he used to be. He has never given up the hope that he might find his daughter and puts up missing signs constantly, even after all these years. 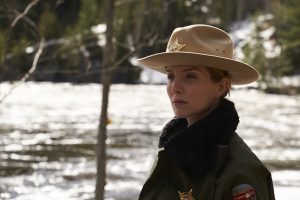 The local sheriff, Alice Gustafson (Annabelle Wallis) has a rough time ahead. Local girls are turning up dead in her jurisdiction and her little brother Brooks (Hero Fiennes Tiffin) is always in some kind of trouble. Rayburn and the sheriff wind up working on the serial killer case side by side, though for different reasons. The murders are happening in Rayburn’s woods and he is afraid his daughter might be one of the killer’s victims. Sheriff Gustafson just wants to get her killer, unless, as she suspects, it could be her brother. 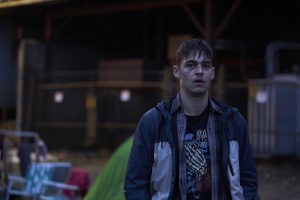 Confused? Yes, I was too. Each character is given a bit of storyline, but since we don’t know very much about them, it’s hard to see how they connect in the film. The sheriff describes herself as being different from other sheriffs- but if her brother is involved, she may just look the other way. Brooks himself is a great character, and we come to understand that something bad happened to him when he was young, making him such a pain in his sister’s butt, but we don’t get that story finished either.

Who is the ghillie suited killer in the forest? (Some of the scariest stuff is seeing him or her on the surveillance camera, rising from the forest floor in that costume.) Needing to know whodunit is the main thing that keeps us going forward. With the other characters and their flaws throwing up red herrings, we twist and turn our way to the conclusion and find out, to our surprise, the reveal of the serial killer. Who, without giving away a plot point, seems like an odd choice. 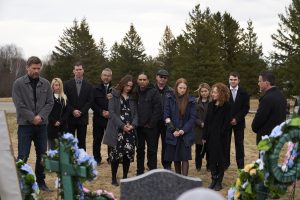 What I liked: The cinematography was wonderful. The lovely wooded Ontario, Canada was a perfect background – I loved the aesthetics of it. The SFX were perfect and super creepy, and the acting was top-notch.

What didn’t work: There were many holes and inconsistencies in the storyline. It was as if they wanted to stuff it with more characters than it needed and some of those characters were not fleshed out all the way. I wish I had known more about Sheriff Alice. Why was she different, as she states, and why was she protecting her brother? 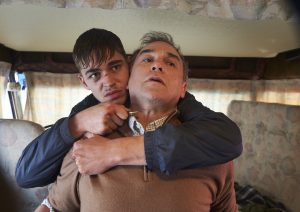 Another question I had was: Why did the killer take revenge the way they did? An ancient spear called an atlatl? It was cool but it didn’t seem to match the murderer when they are revealed. You’ll see what I mean when you watch it. And the title- You will eventually see what the title means- but again not why.

So, bottom line I’m not saying I disliked The Silencing. There was action, suspense, great SFX with some awesome dead bodies, and terrific acting. I just found it to be a bit confusing and inconsistent.

Overall the film was fascinating, tense, and very creepy.

The Silencing is Available In Theaters, On Demand and On Digital August 14, 2020