Your really strong man fears nothing. It is the weak one that is afraid of - - experience.

Is there a more timeless concept than that of people wearing multiple masks, faces, or personae?  It is a practice that has existed ever since the developement of civilized society, people behaving one way on the outside and feeling very different on the inside.  Imagine this, you live in a time where it isn’t proper to fully speak your mind, the socially accepted clothing is unbearably uncomfortable and itchy, and if you have to listen to one more obnoxious lecture about business or trade agreements you’re going to bash someone’s skull in with a hammer until the bad noise stops coming out.  You really want to go get that hammer as the droll “Ben Stein” like voice just keeps spewing useless knowledge lost on you because all you can think of is the hammer. 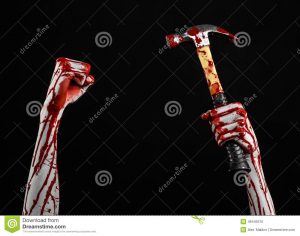 As much as you want to just scream “Shut up, nobody cares!”  You simply smile and endure because it only takes one social faux pas to turn you into a pariah.  I can’t help but feel like this is how author Robert Louis Stevenson felt while writing the novella “The strange case of Dr. Jekyll and Mr. Hyde”  Which is exactly what this movie is an adaptation of.  There have been countless remakes of this movie but all stay true to the source material, or so much so that it is always the same concept.  This version stars John Barrymore, who plays the dual role of Henry Jekyll and Edward Hyde, and if that name looks familiar that might be because he is a member of the “Drew and Barrymore theatrical families.”  These guys are or at least were considered royalty among the stars, similarly to how the public once viewed the Baldwins.  The Barrymore family has brought us great performances and even inspired a Broadway and West End Play, they also gave us a girl who has “Never Been Kissed” 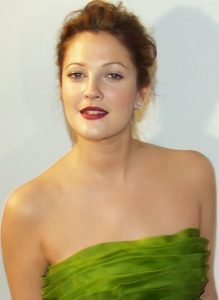 Now that I have given you a little bit of an idea what to expect, let’s jump right in shall we?  We find Dr. Jekyll and his colleague Dr. Richard Lanyon, played by Charles Willis Lane discussing science and the effect it can have on the mind and body.  It is established early on that Lanyon is “professionally Conservative” a term here I’ve taken as meaning “Devil’s Advocate” as he quickly shuts Jekyll down, declaring his work super natural.  We follow Jekyll to his clinic for the poor where we see him casted in a light that shows his unending kindness, as he pays out-of-pocket to keep the place running.  On the other end of the spectrum we meet Sir George Carew, played by Brandon Hurst.  George is like a polar opposite of Jekyll as he prefers to distance himself as much as possible from illness and the poor alike.  The first time we see him he is busy trying to smooth talk a guest in his manor.  At the same time we are introduced to Millicent Carew, played by Martha Mansfield, who is Jekyll’s fiancé and George’s daughter.  It is understandable any father would distrust the man intending to bed their daughter but George goes out of his way to be a jerk about it.

“When I’m not mackin on chicks, I’m calling B.S. On everyone else“

George and his aristocratic friends discuss at length the question of Jekyll’s integrity and reputation.  It was the 1800’s equivalent of the real house wives, only with dudes in suits drunk on wine.  Many of the attending party actually vouch for Jekyll insisting he is as upstanding as a saint, even if they lost a wager on his character before or even disagreed with him on any front.  George, however continues to disagree.  Enter Jekyll who is greeted briefly before George starts to push Jekyll, insisting there has to be more to life than helping others, even trying to convince Jekyll that he is wasting his life by not indulging in selfish things.  George is the physical embodiment of the little shoulder devil from those old cartoons. 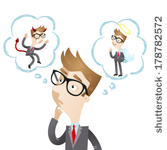 George is the one with a tail.

They go to a late evening theater house so George can continue to lay temptations before our honest boy scout of a man Dr. Jekyll.  Here we see temptations in almost all of its forms and we see Jekyll sitting awkwardly uncomfortable in the environment.  George has a woman sent to Jekyll who almost forgets himself, but instead takes his leave, disgusted by the whole thing.

Unable to shake what had awakened in him, he realizes such urges of a basic nature do exist in all men, and wanting to indulge while keeping his soul pure he proposes to separate the two faces of man,to be God and the Devil at the same time.  This is where the repressed urges meet his hubris and Jekyll officially steps into the role of a “Mad Scientist.”  Days and nights spent in his laboratory, an over cast of George’s evil smiling face is all it takes to imply his influence is driving Jekyll, who with a tormented expression consumes the potion he made.  Bringing the birth of Mr. Edward Hyde. 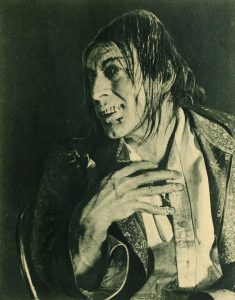 “Happy birthday to me!”

This is where things really start getting interesting.  John Barrymore does such a great job at upping his game as Mr. Hyde in contrast to his stiffer presentation of Dr. Jekyll, that he is downright scary.  He captures the mannerisms of being obsessed with madness perfectly, right down to transforming back into Dr. Jekyll who is disoriented and distraught over his loss of time.  Jekyll fully embraces his new double life by securing a place for Hyde to do whatever he so chooses to without being caught. 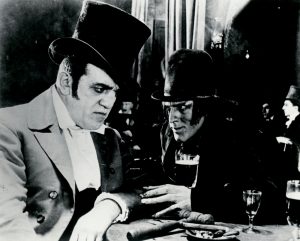 From this point on Mr. Edward Hyde is seen in a cavalcade of debauchery, from heavily drinking, smoking, and picking up high-class call girls, to murder.  Dr. Jekyll gives all his rights and possessions to Mr. Hyde to prevent his double life from becoming a bother.  This works at first and Jekyll is happy to allow Hyde to indulge in his ever darker growing activities.  Eventually Millicent becomes worried about Jekyll because she has seen so little of him.  George goes to call on Jekyll and objects to the marriage because of recent actions, this upsets Jekyll so much that he transforms into Hyde without a potion and ultimately clubs George to death. 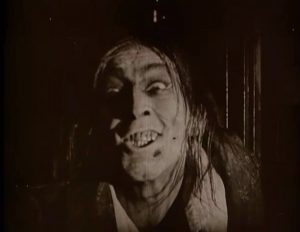 The last thing George ever saw was this

Jekyll discovers that the ingredients needed to control the transformations are depleted all throughout the country, and with no way to control Mr. Hyde he decides instead to lock himself away in his lab, until he can find another solution.  Millicent finally having waited long enough to see Jekyll, takes matters into her own hands.  She comes to call on Jekyll at his lab, as she approaches Jekyll fears what Hyde will do to her so he tries to fight the transformation.  Unable to stop Hyde, Jekyll knows the only way to protect Millicent is to commit suicide.  Jekyll forces the poison down just as Hyde finally takes over.  Hyde attacks Millicent but the poison does its work and Millicent runs to safety.  By the end of it all they discuss Jekyll having committed suicide, while also considering that Mr. Hyde had killed Dr. Jekyll.  Either way they weren’t wrong.

This movie boasts a very broad spectrum in its acting, as well as the music which accompanied it very well.  While Edward Hyde was a scary guy to run into, the real fear in this film is in its message.  It’s a good look at how a person cannot be purely one way or another.  If you were to think of this as less a cast of actors and more on a movie about a man coping with multiple personalities and the struggles to want to do what is right, you realize we all have these impulses and “Voices” in our heads.  Dr. Henry Jekyll is just a representation of what could happen in society if we all turned off our filters.  No matter how well you might think you know someone, be careful to not get too close, they could have a little Hyde in them.