Naughty or Nice: Slay Belles is an entertaining Christmas Slasher!

When I was 3 years old, I saw a commercial that changed my life. There was a place in sunny Southern California where Santa hung out. What??? The Real Santa? Only an hour away? This was too much for my little kid brain- I HAD TO GO. It took practically a year, but I finally drove my parents crazy long enough to get them to take me to Santa’s Village! I remember very little about the actual visit except what I see in the blurry photos my parents took: Licking the north pole, (a big refrigerated pole of ice in the middle of the park, totally germ free I’m sure) riding on something that looked like a bee and sitting atop a giant blue mushroom. But it was the culmination of a dream! I got to go where Santa lived!

So, when I saw the trailer for Slay Belles, a new Christmas themed slasher from Spooky Dan Walker and Jessica Luhrssen, and realized it was shot at long abandoned Santa’s Village- well ring those Christmas bells and let’s get this sleigh in the air! 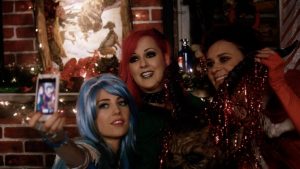 Official Synopsis: It’s Christmas Eve, and three cosplaying women come across the malevolent Christmas demon Krampus. The girls must team up with Santa Claus himself to battle the creature and save the world.

Slay Belles begins by introducing us to three friends who host a YouTube show called The Adventure Girls. In wild, sleazy and very revealing costumes, they travel to unusual places to have crazy and silly (ta da) adventures. For the Christmas segment, Dahlia (Susan Slaughter) and Sadie (Hannah Walker) take their friend Alexi (Kristina Klebe) on the ultimate holiday adventure: breaking into the closed and deserted Santa Land. (OMG- I’m back at Santa’s Village even if it’s trespassing!! Fangirl moment!)

On the way, they stop at a decrepit bar and have a run in with owner Cherry (a very funny Diane Salinger) and find out from the local law enforcement, Ranger Sean (Steven Lunsford) that there is a serial killer in town stalking children. Or maybe it is a bear? The local police are completely inept at figuring this out. 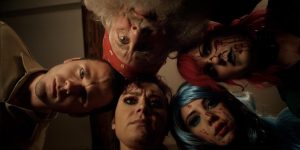 But there is no stopping the Adventure Girls, so off to Santa Land they go, changing into their Christmas sleaze finest (with a gratuitous boob shot thrown in for luck) and climb over the fence despite the warning that there is a dangerous creature about. After a lot of posing, (even up on one of the giant mushrooms where I once sat) they realize they are being watched. Who or what could it be?

When a hairy monster attacks they hide in a cabin and bam, run right into a hippie biker version of Santa who is (OMG) Barry Bostwick! (Rocky Horror Picture Show’s Brad and my fangirl moment #2!) Once the girls finally believe he is the real deal, they find out Santa is a seriously bad-ass dude with a magic staff. But Krampus is eating the heart out of children, and it’s up to the Slay Belles to help him defeat the hairy horned nemesis of Santa if they want to save Christmas!

Slay Belles is a B-movie for sure, full of story, camera and sound problems, bad CGI and lots of sexual innuendoes. But Barry is terrific as Santa, the surprise ending is awesome, and I think it has the makings of a campy Christmas classic.

There have been quite a few new holiday films this year, some which were pretty darn good and some that went straight to the bottom of the naughty list. So where does Slay Belles fit it? I’m gonna put it right in the middle- It’s not super nice, or coal deserving naughty. I enjoyed the shenanigans: It’s a fun, silly and campy film despite many problems with the actual production.

So, grab some eggnog, a hot cocoa with a peppermint stick, or hell do a bunch of shots, but experience the goofy joyfulness of Slay Belles for yourself!