"The Devil's Reject 2: Three from Hell" is officially filming now!

At the end of Rob Zombie’s, The Devil’s Rejects, the whole sociopathic Firefly family went down in a rain of fire during a slow-mo shootout with police. Since they were all killed- it was not expected for there to be a sequel, well except for anyone who thought, “Why should they stay dead”? It seems it was an incorrect assumption, that anybody as evil as they were would stay gone for long. 13 years later, judging by the name of the film, in The Devil’s Rejects: Three from Hell, the Firefly’s are back from hell itself! 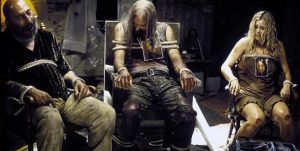 The Devil’s Rejects is one of those movies people either love or hate. I happen to love it! One of Rob Zombie’s best and most loved horror films, fans are going to be ecstatic that there is a sequel! Otis (Bill Mosely), Captain Spaulding (Sid Haig) and Baby Firefly (Sheri Moon Zombie) are all back in this new set photo just released by Rob Zombie!

From Rob Zombie’s official Instagram account: “It’s all true! Day One shooting Three From Hell! The murder and madness continues.”

The zombie lover in me would love to see them return as undead killers, but in any case, it looks like it could be a supernatural homecoming! Maybe someone brought them back to get revenge, or maybe it’s a prequel? That info hasn’t been announced yet- so we will all have to wait and see. I know this horror fan is ready for more insanity from the Firefly family of monsters!

Rumors are that Three From Hell will be released the same way as his film “31” and that Rob Zombie is negotiating with both Saban Films and Lionsgate to release The Devil’s Rejects 2: Three From Hell in theaters, VOD, and home video.