While we may never get the truth, the whole truth anyway, from American Horror Story‘s Ryan Murphy or Brad Falchuk, I can, however, give you some sneak peek photos from Season 7 of the FX Network’s hit show. Filming for one day in my neighborhood, Old Town Orange, California, I got a few photos that at least confirms one tease we got from Mr. Murphy on his Instagram in May. Evan Peter’s hair is definitely blue! 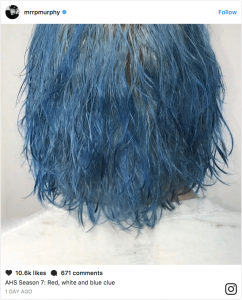 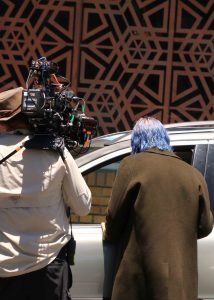 The shoot also confirmed Sarah Paulson and Evan are both key members of this season’s ensemble. Judging by what was being filmed, Sarah’s character is being accused of something bad (murder, according to the signs) and is being protested in front of a place of business called The Butchery. Oh, and it’s supposed to be winter in Michigan. Sorry, that’s all I have for you, but ya gotta love the blue hair! 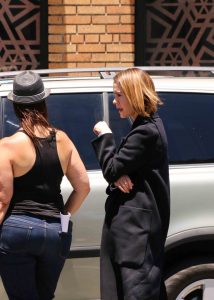 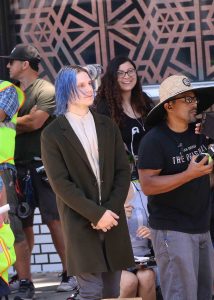 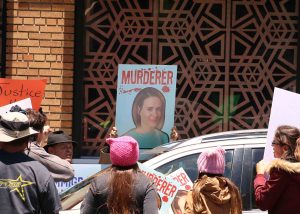 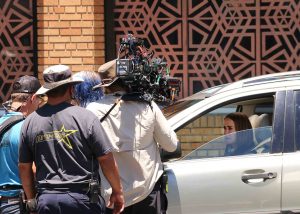 Previously, Ryan Murphy had stated that American Horror Story Season 7 would not be as secretive as Season 6 was about its theme when he unexpectedly dropped a bombshell on Watch What Happens Live with Andy Cohen, revealing that Season 7 will be about the U.S. presidential election. Said Murphy, “Well I don’t have a title, but the season we begin shooting in June is going to be about the election that we just went through. So I think that will be interesting for a lot of people.”

Since then, Murphy took that statement back, saying Trump and Secretary of State Hillary Clinton would not be characters in the season. He does state though that first episode’s 10-minute opening will be on the horror of election night. And it will feature footage of the real-life Trump and Clinton. There is your Red, white and blue, I guess.

Teaser videos on YouTube give the impression of underwater, the ocean… Maybe Atlantis, a cruise ship? Watch and decide for yourself. As usual, they could be real clues, fan speculations, or just bread crumbs taking you off the wrong way. There have also been hints that they will revisit Freak Show (Season 4) characters; their histories, and mythologies.

Whatever it is, I will be there in the fall (rumor is September) for the premiere. This is one of my favorite shows and I can’t wait to see what atrocities they will bring us this year!