‘SockMonster’ Horror Short: The Day the Laundry Gets Revenge

SockMonster made me look a little differently at my dryer and wonder ‚ÄúShould I just switch to sandals?‚Äù

My mom taught me: Always carefully sort your laundry. Whites, colors, hot, cold, delicates – all should be separated. She never mentioned that we also, do not want to piss it off!¬Ý

I generally don‚Äôt review short horror films. Not because many of them aren‚Äôt fantastic, or even truly some of the best moments in horror I‚Äôve ever had. It‚Äôs just the dilemma of trying to write a review on something that short, without spoiling it for the audience!

SockMonster is one of those films that I really want to talk about because it gets right to the point and packs so much story into just under four minutes! One of the hardest parts about a short film is that for horror to work, it is imperative that we care about our protagonist, in this case, a mom named Anne, and writer/director Wesley Alley managed to do that beautifully. Reminding me of Stephen King‚Äôs short ‚ÄúThe Mangler,‚Äù I also love the obvious touches added by producer Darren Lynn Bousman‚Äôs sick and twisted mind. 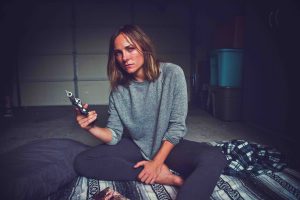 When we see the dirty basement, unfinished food, the grieving woman (a fantastic Briana Evigan) pacing the floor and her obvious waiting area right in front of the washer-dryer combo, we immediately know something very bad has happened. With red-rimmed eyes, the chain-smoking, heavy drinking mom tries not to cry as she looks at photos of her little girl. Seeing the child‚Äôs doll lying in front of her, we know, we absolutely know, that her child has suffered terribly somehow. When Anne picks up the gun, we wonder if it‚Äôs for herself or for what‚Äôs in the dryer.

Now, knowing the name of the film, it was simple to guess where it was going, but not quite how. Every one of us has joked about what happened to our socks in the dryer, but I don‚Äôt remember ever thinking about it being anything sinister. Was this going to be a goofy and funny critter or a horrifying monster? After all, it was probably going to be comprised of socks.

As I said above we have to be invested in characters. I felt so sad and nervous for Anne, who has obviously been sitting there for a long time, hoping to get her daughter back. I found myself very emotionally attached to her right from the first minute.

I‚Äôm glad to say it was a true horror ending, intense, creative, unique, and one that satisfied my dark side. The SFX were terrific. Wow- what a lot to pack into less than four minutes!

SockMonster¬Ýhas played at over 30 film festivals this year and should be looking for distribution or release to the public in the next few months. So when you can please check it out, because it‚Äôs worth it. But remember, when you do your laundry to count those socks- you don’t want any of them to go missing!