"You can't outrun a family secret" 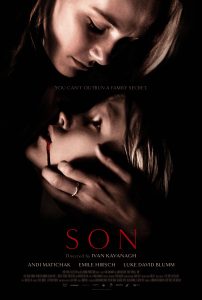 Parenting is hard in any case, but a child that is not of this world is a whole other problem.

When my daughter was little, we tried to tell her she was an alien because she had green blood. When she got her first scrape and bled normal red blood, we told her they gave her a transfusion at birth, and she had apparently become human. I’m not sure why we went to such lengths with the joke, but she thought it was funny and we kept it up for a while. The idea that your child came from another world is not a new one. Favorite films of mine, Rosemary’s Baby and The Omen came to mind while I was watching Son.

SYNOPSIS: When a young boy contracts a mysterious illness, his mother must decide how far she will go to defend him from terrifying forces in her past.

Son, written and directed by Ivan Kavanagh is a fascinating look at the lengths a mother will go to protect a child that she loves. This film is not the scariest film I’ve seen recently but is emotional as hell and is surprisingly one of the goriest so far this year.

We begin with a very pregnant Laura, (Andi Matichak) who is running away from something bad and ends up having the baby in her car. She didn’t seem to want the baby at first but falls in love when she sees his little face. That damn maternal instinct will get you every time.

Jumping ahead 8 years, Laura is a Kindergarten teacher, living in a small town with her 8-year-old son David. (Luke David Blumm) He seems like a normal cute little guy and they have an extremely sweet relationship. He is nothing to fear, right?

After she puts David to bed one night, she hears some noises coming from his room and is terrified when she finds a group of people standing around his bed. Screaming for help and calling the police, she seems to have stopped a potential kidnapping. David doesn’t remember anything, and the police find no forced entry or anything else to validate her story. Officers Steve (Cranston Johnson) and Paul (Emile Hirsch) play a sympathetic bad cop/good cop routine but are both looking at her like she might be dreaming, or just plain crazy.

When David gets horribly sick, his flesh sloughing off and throwing up blood, the doctors at the hospital are unsure what to do. Paul offers to help keep an eye on him and Laura accepts. A little romantic moment begins with them, but David doesn’t make it through the night without getting sick again and they go back to the ER.

The doctors run every test and have no idea what is wrong. While waiting, Laura decides to open up to Paul about having been in a cult, escaped, and has been hiding ever since. But when she hears the doctors talking about taking David, she grabs him and flees. At home, she quickly packs and her neighbor watches poor little sick David. Unfortunately, when Laura gets back to them, David is eating the neighbor and looks perfectly well again. This is a bummer because good babysitters are hard to find.

From time to time, we see a bedroom scene and the suggestion that Laura was abused, and it’s not hard to figure out who David’s real daddy is. Whatever supernatural hellish entity it was, has passed on its need for human flesh to survive, and Laura has a dilemma on her hands. Should she save the child that is a part of her, or should she protect humanity? 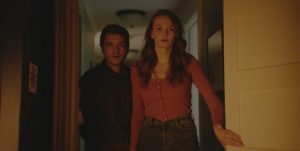 If I am to be honest, I could see the ending coming a mile away, but I still enjoyed the film. I can’t help but love watching really bad guys get what they deserve, and the wink to The Shining’s bathroom scene was amazing. In this part of the movie, the atmospheric and colorful cinematography was intense and lets the tension build to a bloody crescendo.

David doesn’t seem to remember what he turns into, but wow what a monster he is. The practical effects were mind-blowing and he is a better zombie than pretty much all of them out there! He becomes a feral demonic animal and his mom, well what she becomes when pushed to the edge to save him, really was creepy as hell. (Pun intended)

Despite the abundance of over-used horror tropes, I really enjoyed Son. I loved the relationship between mother and son, and their acting was fantastic. It wasn’t the best performance I’ve ever seen from veteran horror actor Emile Hirsch, but because of who he turns out to be, I absolutely understand the reason for the toned-down acting.

RLJE Films released the horror film SON in Theaters, on Digital and On-Demand, March 5, 2021. For more info, RLJE has a Facebook page where you can find whatever you need to know about this film and tons of others!

Son can be found on Shudder and will also be available on
DVD and Blu-ray on May 18th, 2021