Dying Light might be considered a ramped up version of Dead Island and Mirrors Edge, but those titles can’t top this special edition.

Like special edition games they come with a collector statue like Titanfall coming with a massive statute of a titan or Kratos action model with God of War or steel book or even the most crazy one (till now) a real life car. Well this one has got them all beat and has set the record for the most expensive special edition of any title ever released.

The Special Edition of “Dying Light” costs $385,000 and includes the following:
4 signed copies of the Dying Light title
2 sets of headphones
Season Pass
A round trip to Techland
Night vision googles
Adult diapers
Parkour lessons
Your face in the game
A life size replica of a zombie
and the prize piece a specially built zombie proof shelter 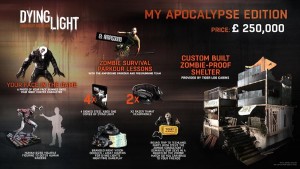 These are some absolutely crazy publicity stunts but damn it would be cool to actually buy an extreme edition of any game.