Follow the crumbs in the NEW TEASER TRAILER for GRETEL & HANSEL 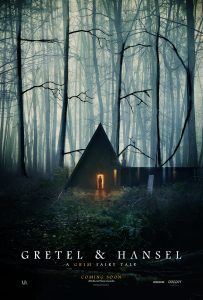 The new trailer for dark fairytale GRETEL & HANSEL starring Sophia Lillis (It: Chapter 2) is out. Orion Pictures’ upcoming horror, also starring Alice Krige (Stark Trek: First Contact) and introducing Sammy Leakey, is the terrifying new vision of a classic fairytale we all know and love. Be sure to catch Osgood “Oz” Perkins’ (The Blackcoat’s Daughter, I Am the Pretty Thing That Lives in the House) latest film creeping its way into theaters everywhere on January 31, 2020

Synopsis: A long time ago in a distant fairytale countryside, a young girl (Sophia Lillis, It) leads her little brother (Sammy Leakey) into a dark wood in desperate search of food and work, only to stumble upon a nexus of terrifying evil.

Oz Perkins, the director of “The Blackcoats Daughter” gives us a new dark twist on the familiar Brothers Grimm’s fairytale. Oz is the son of the famous Anthony Perkins and is making quite a name for himself. His third feature film looks beautiful in the trailer and I have high hopes this is going to be a terrific film.

Perkins is best known as the writer and director of back-to-back horror films “The Blackcoat’s Daughter” (2015), and “I Am the Pretty Thing That Lives in the House (2016)”. Both films received generally positive reviews, earning praise for their atmosphere, tension, and stellar acting.