‘Stranger Things’ is a supernatural, nostalgic nod to 80’s Sci-Fi and Horror movies

After a binge watch session on Netflix of Stranger Things, I really feel like I have gone back in time. Without giving away too much of the plot: Stranger Things is about a missing boy and a mysterious girl with telekinetic powers who escaped from an ominous military base outside of town. The missing boy’s mom, brother and his friends never give up trying to find him, no matter how much the bad guys and a terrible monster want to stop them. Also throw in a little young love to round it out and you have Stranger Things. 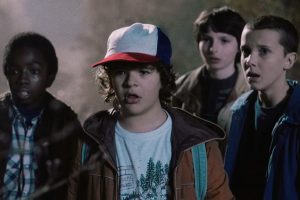 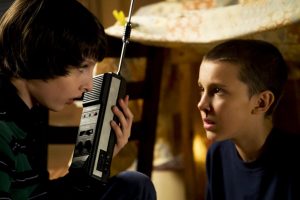 Some of it felt even earlier than the 1983 target year, more like the mid to late 70’s, but none the less, the nostalgia grabbed me and made me stick with the entire Season 1, watching all 8 episodes, one right after the other. The Duffer Brothers brought us an interesting and unique tale from a simpler time- before cell phones, the internet and all the modern technology we are so used to now, that get in the way. Playing Dungeons and Dragons without a controller in our hands, so we were forced to play eye to eye with our friends, and really use our creativity. The decor, wardrobe, music, cars and people really step right out of the late 70’s, early 80’s. (And I was alive then and can remember it for real!) Was it a perfect show? Not exactly, but I was compelled to watch it straight through because I cared about the characters and for the same reason some people will put it down, all the nods to classic horror and Sci-Fi movies from the past that I loved, made me happy. There were obvious parts that reminded me of ET, Poltergeist, X-Files, Stand by Me, Super 8 and so many other scenes from different Slasher/Sci-Fi films from the 70’s/80’s that it would be too boring to list. You need to watch for them yourselves. 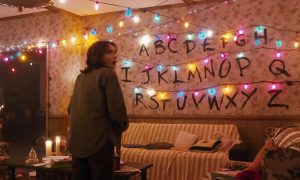 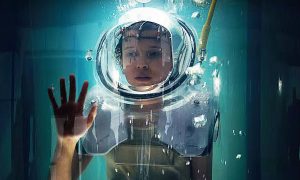 So, if there was nothing new, just an ode to old movies and a cliche small town drama, why did I like it so much? It had some slow scenes and there were some plot holes. So why is it such a special show? What makes it work is the way it is all put together. The old time feel, with much better technology and special effects was really well done. The cinematography was dark, creepy and every time the lights flickered I was on the edge of my seat. I always love that kids are portrayed as being able to accept and help the odd newcomer in a way that adults never can. The acting was awesome – I loved seeing Winona Ryder again, she herself a flash from my 80’s past. Her manic portrayal of the missing boy Will’s (played by Noah Schnapp) mom was very well done. Milly Bobby Brown was amazing as the little girl named Eleven, who is the connection to the horrible monster from The Upside Down world and the center of the entire story. She managed to tell us huge amounts of information, without using very many words, just her expressions. The other boys, Will’s geeky friends, played by Finn Wolfhard, Caleb McLaughlin and Gaten Matarazzo, were also great. They made me laugh, they made me worry about them and I saw parts of my childhood in them, good and bad. The show would not have been as good if the acting hadn’t been so strong. The young love with the older kids, was as awkward as it really was back then, with an innocence that our kids now may never get to experience, especially with everything they are exposed to via TV and the internet.

So if you haven’t already started watching Stranger Things– I suggest you do it now! Look for all your favorite classic movie scenes, or if you are too young, try to guess what movies they were inspired by. A movie scavenger hunt if you will. Have fun and enjoy your binge watch!