Home invasion films are particularly unnerving, and after each one I have seen, I spend an inordinate amount of time afterward, making sure my house and my vehicles are secure. Our homes are our sanctuary, but after a violent event in one’s own space, it would be hard to ever feel safe again. Recent statistics show about 4,500 home burglaries in the U.S. every day! Not to say they are these kinds of horrifically violent attacks, but serial killers do exist, which is why these movies work at a deep fear level. The Strangers: Prey at Night gave us a little more room for the killers to work in, but the protagonists, didn’t feel any less trapped.

The Strangers: Prey at Night made me feel uncomfortable yet again, still checking for cracks in my home defense. Sadly, as much as I wanted it to be as scary as The Strangers was 10 years ago, for me it didn’t quite compare. But I liked it a lot, and I’m glad it didn’t leave the audience feeling as bleak and hopeless as the first one did. It’s hard to compare severed heads to severed heads, (sounded better than apples) but let’s look at it from a horror genre point of view.

I am a true horror film lover, someone who looks for something positive in everything I see if possible, and I enjoyed this film for what it was. It is an homage to ’80’s slasher films, but the cinematography is so much better. The film is kind of a sequel to The Strangers from 2008, and we see the return of the kill-for-no-reason trio of psychopaths; Doll-Face (Emma Bellomy), Man in the Mask (Damian Maffei) and Pin-Up Girl (Lea Enslin) who are still as bloodthirsty as before. This movie could literally be the next night and they are just continuing their homicidal spree. 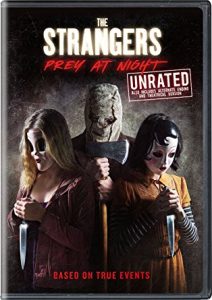 The film starts at a dark and foggy trailer park with the infamous girl knocking on the door asking for Tamara. We know the sleeping couple inside is in trouble from the first minute of the film. Cut from there to a family, on their way to take troubled teen daughter Kinsey (Bailee Madison) to boarding school, in an attempt to straighten out her apparently bad behavior. Before they drop her off they decide to make it a family vacation of sorts, so Mom and Dad (Christina Hendricks, Martin Henderson) along with brother, Luke (Lewis Pullman) go to their uncle’s trailer park by a lake for some bonding time. As soon as they get to the abandoned location, we realize the violence at the beginning was at this very place and wish we could tell them to go back home, now!

This time around, the script again written by Bryan Bertino along with Ben Ketai, is directed by Johannes Roberts. (47 Meters Down) Roberts skillfully brings us into a gloomy dark place, with a John Carpenter type stylistic feel. The atmosphere was fantastic! Foggy and damp, dark shadows, moody, full of jump scares, striking visuals and tension, this is a place you shouldn’t be! The bad guys could be anywhere.

I was pulled in by the aesthetic of the film and a couple of scenes were beyond gorgeous, in a horrific sort of way. The pool scene was friggin’ amazing, and the truck on fire, driving slowly down the street, brought me right back into one of my favorite Stephen King classics, Christine.

The acting was first-rate and I really liked the relationship between Luke and Kinsey. I was able to feel like I knew them well enough to care about them, and hoped that they wouldn’t fall prey to too many horror tropes while trying to survive. I wanted to see more behind the masks of our killers though and would love to know why they became such relentless monsters.

My biggest problem was that since I had already seen The Strangers, I knew what to expect around every corner. Get in your car? (No, it will just get wrecked.) Wondering when they would show the playground with an empty swing going back and forth. (They did) I also caught myself talking to the person on the screen- “If they are knocking, they’re already in the house, look behind you!!” (Yep, there they are) 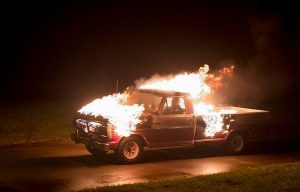 Final Thoughts: I loved the look of the film, didn’t hate the acting and absolutely loved some of the scenes just for pure horror beauty. The characters were likeable, even if predictable, so I felt I could root for them to live, and once they got going, were a quite bit better at fighting back than most horror film victims. I do hate it when a bad guy gets away unscathed, so it was good to see that the family fought back with equally deadly actions, because of their need to survive. The masked monsters got what they deserved! Or did they?

The Strangers: Prey at Night is available on DVD/BluRay, Digital and on VOD now. Watch it if you dare and keep your doors locked!