"I've been tortured by the devil himself, what can you do to me?

So usually I write more about horror movies- but I admit I am a little obsessed with Supernatural. It is my guilty pleasure and it gives me a place to escape, to watch a show that is both gory and funny, has kick-ass girl baddies from time to time, the best classic rock ever, and what can I say, Sam and Dean (Jared Padalecki and Jenson Ackles) are nice to look at! The show is going into its 12th season and that says a lot. One of the great things about the show is that they can go any direction that they want to. The Winchester brothers are hunters, monster hunters, so that opens the door for just about any horror story line they want. What monster haven’t they seen yet? There have been werewolves, vampires, zombies, ghosts, wendigos, demons, leviathans, even Lucifer himself (and that’s just a few)- Supernatural has monsters to be sure! Supernatural has a plethora of elements that make it the show so beloved by its fans. It can be mystical, paranormal, action-packed, bloody or a violent gore fest. The story can be simple or complicated, depending on the season, but always with a smidge of comedy, family and romance thrown in. 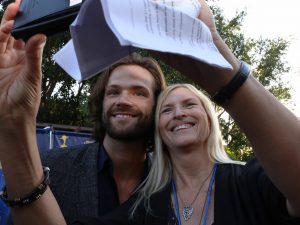 Your Zombie Girl gets a selfie with Jared Padalecki

Just so you know, I am not going over the premise of the entire show in this article- I’m starting at the end of Season 11. If you are not caught up, then I suggest your do some serious binge watching! So, tomorrow is the premiere of Season 12! At the end of Season 11, Amara had been defeated and Dean came face-to-face with his mother, Mary Winchester (Samantha Smith) who died when he was 4. Then we have Sam, looking like he got shot by a woman, named Lady Toni (Elizabeth Blackmore) who is a member of the British Men of Letters. 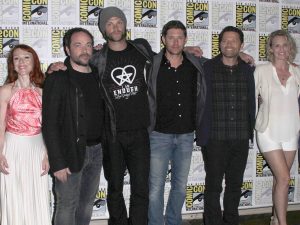 So now we have Dean, our favorite angel Castiel (Mischa Collins) and Mary teaming up to try to find Sam, who apparently has been kidnapped and is being tortured. The Winchester boys sure get tortured a lot! Amara released Lucifer out of Castiel’s body which means he needs a new meat suit, as they describe human bodies on the show. I hear he jumps around a bit until he ends up inside older rock star, Vince Vincente, played perfectly by Rick Springfield. Lucifer wants to be worshiped- so what a perfect body a rock star is for him! Castiel and our favorite King of Hell, Crowley (Mark Sheppard) are both angry and revengeful from all the humiliation Lucifer caused them, and will team up to try to send him back where he belongs!

Without giving out too much info, Sam and Dean are going to have to get used to having their mother around, especially since she is such an awesome hunter. Castiel and Mary become friends and the Winchester boys will be going head-to-head with Hitler! Lots of action packed episodes ahead!