The choices you make really matter

In The Walking Dead: Michonne, as with all Telltale games, its the choices you make that really matter. This game is based on The Walking Dead comics (not the TV show) and tells the story of Michonne’s journey in between issues 126 and 139. She is haunted by her dead children and her visions of them continually blur into reality. After a suicide attempt she is rescued by fellow survivor Pete and finds herself traveling on a boat with his friends. They go out in search of survivors and befriend a precocious teenage girl named Sam while making enemies of another settlement. The decisions you make will affect who lives and who dies in this thrilling zombie adventure game. 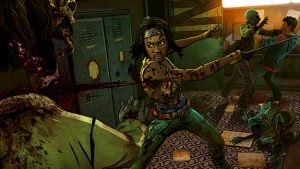 If you’ve played a Telltale game before then you already know what to expect in terms of gameplay. The bulk of the game is spent making dialogue choices and seeing the impact of said choices. The other characters remember what Michonne says and does, and this can lead to some truly devastating consequences. Fights against humans and walkers are handled through QTEs (basically pressing the right button in a limited amount of time), but these can still be thrilling because you become so emotionally invested in the characters. The game consists of three episodes, and in episode three the impact of your previous choices is really felt. The biggest moment comes at the end of episode two where your choice of whether or not to kill a villain has a long reaching impact (trust me you’ll want to kill him even though it might not be a good idea). The game is as brutal and violent as you want it to be. You can show mercy or let walkers tear certain characters apart. The way I played through left me with a satisfying conclusion, although you may experience different results. Either way all story threads are wrapped up nicely. 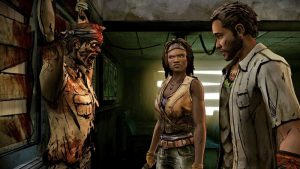 While I am a big fan of the show I’ve never read the comics. That didn’t matter when playing. Even without much knowledge of The Walking Dead you can fully enjoy this game. The story stands very well on its own. I understand that some do not like this type of adventure game, and perhaps I’m a little biased because I’ve always enjoyed Telltale’s style, but this represents the height of what Telltale has to offer. A thrilling, gory, emotional story that continuously evolves based on your decisions set in The Walking Dead universe. I mean really, it doesn’t get much better then that. All episodes are now available on home gaming consoles, PC, and mobile.