"Just be who who you want to be" - John Waters

We all know who John Waters is; a prolific filmmaker, an artist who has made a career out of turning the very idea of perversion on it’s ear, he is the bane of 1980 – 2010’s conservatives,”The Pope of Trash”, breaker of rules, king of satire, an influential force for dada creatives, and of course The cheerleader for fellow lgbtqa+ to live our lives unapologetically.

At 75 years old John Waters has seen the censorship of his work come full circle after creating for over 55 years. He’s challenged an entire era of Conservative bias that influenced everything in the media to keep a strict code of language restrictions, bad after school special scenarios, & daily god injections. He won.

He is undeniably an icon & inspiration to many, so much so that his films Polyester, Female Trouble, (and most recently) Pink Flamingos has joined the Criterion Collection.

John has a knack for being everywhere all the time, his fingerprint cemented in pop culture media across the gamut. With recent appearances in the HBO series Search Party, Amazon show The Marvelous Mrs. Maisel, Camp John Waters, his upcoming book tour, and his ongoing in person show; False Negative, with over 35 scheduled appearances for 2022.

I recently had the immense honor of getting to talk with John, and here’s the Quick Catch Up 3 Q&A Skinny:

3. Yes. John Waters does indeed have a new secret squirrel project in the works.

False Negative is his one man show that explores every active observational thought he has, it isn’t scripted, the man runs on vibes. Reviews have described the experience as “A spoken word jet fueled vaudeville experience from the King of Trash himself.”

You can join him this weekend at The Colonial Theatre in Sacramento, California on March 12th, 2022 @ 7pm. 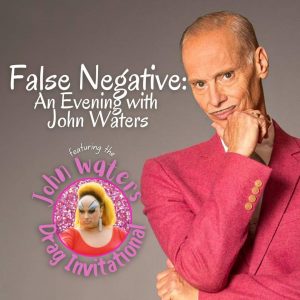 On a personal note, speaking to him was a childhood dream come true. We discussed aspirations, identity, sexuality, gender, & the magnificence of Devine. He left me with this joyful thought and I feel it’s an important message for all of us: “Just be who you want to be!”