The latest contribution within the growing arena of graphic horror treats comes from the inventive mind and founder of Death Punk Comix LTD, Vishal Rajput.  After pretty much completing almost all facets of operation upon his last project entitled Anjaan Loag Gumnaam Kahani ( 2012 ) which was a 30 minute short film following the troubles a man encounters after loosing his job, Vishal began on his obvious passion project The Berzerk Death Dealer comic. 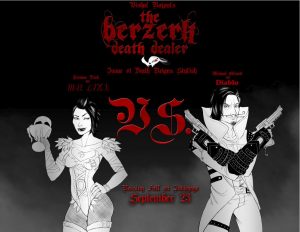 Vishal again, provided much of the talent and work needed to successfully complete this crowd funded campaign, but on this endeavor he had the invaluable artistic abilities of Ashlee Galloway.  Together the team co created the character designs which give immense likeness to genre darling Tristan Risk ( American Mary ) and  prolific actor Michael Eklund ( The Divide ).  Galloway also was responsible for the incredible artwork and lettering found within The Berzerk Death Dealer, adding to the detailed and rather gruesome unfolding story as Vishal wrote and produced his original idea.

A city in violent ruins, creating a rabid dog eat dog society with unscrupulous business transactions, hate, and unprecedented levels of crime, is our dark backdrop for The Berzerk Death Dealer.  Lawlessness is the way of life in Gothic Town, with roving and merciless gangs and clans struggling viciously for control, lending a shout out of sorts to personal favorites Escape From NY and the apocalyptic wasteland depicted in the Mad Max franchise.  The abysmal current state of Gothic Town is evident as floating corpses pepper the rust colored waterfront.

We meet a disconnected and inebriated young man, joyfully stretched out on the grass, next to an equally as happy mutt who seems as if the hound was handcrafted by skilled Demons.  The otherworldly pooch is named Rockabella, and she gladly displays loyal, humanistic traits as she engages in the same drug and alcohol aided hijinx as her beloved cohort, Diablo.

‘Big Boss’ reads the caller ID on the phone.

“Fucking A” is the enthusiastic close given to Big Boss after Diablo receives specific instructions from the large and in charge.  The malicious duo waste no time suiting up, preparing for an inevitable battle.  A multitude of handguns are strapped upon both members of this search and destroy team as they appear quite satisfied that danger is on the horizon.  Diablo, somewhat echoing the unsettling guitar playing terrorizer atop the massive flame throwing monstrosity in Mad Max Fury Road, slings a wicked guitar on his back.

Staking claim to the fucking coolest distant cousin of a classic Voltron cartoon  I’ve ever seen, the hound Rockabella morphs into a mechanical monster of a motorcycle, possessing hellacious horsepower  allowing the Death Dealer an unparalleled version of Man’s best friend.

The two arrive at the destination they are ordered to exact swift and unrepentant punishment upon.  Diablo sits on top of the tall structure, studying his prey down below.  A quick yet disturbing glimpse into the type of establishment they are about to enter puts an evil grin upon Diablos face.

An astonishing collection of Medieval torture devices, stained with blood, give warning to the next poor bastard being tied to it.  The women within these walls, met the pleas cried out from their victims in some most horrendous ways.  As I was enjoying this stylish and dark comic, I could almost hear whips slicing through bare flesh, chains rattling as severed limbs hang carelessly within their clutches.

The seductive siren and leader ( Tristan Risk ) addresses the ladies suffering a severe case of from blood lust.

“My little Queenz!” she proclaims as she gives a perverse pep rally to her devoted followers.  Diablo has other plans for the group engaging in gore below him.  Opting for the surefire, attention grabbing offensive of tossing a devastating projectile down upon the sadistic sisterhood, it proved successful.  Not becoming phased in the least, the feisty female leader, Maz Latex gladly accepts this obvious challenge from Diablo and Rockabella.

In a piece of delightfully twisted artwork which reminded me a bit of Johnny The Homicidal Maniac via the genius mind of Jhonen Vasquez ( Invader Zim ) Diablo dons a menacing looking gas mask with a sinister red star emblazoned upon it.  Almost just as quickly as I felt a slight connection to JTHM, the next page displayed a scene which possibly could have been interchanged within this tale and an installment from one of the epic Mad Max films.  Sporting a leather trench coat, chains, impressive armory in addition to a killer 5 string slung across his back, Diablo hisses through his mask, “Death reigns stylish” 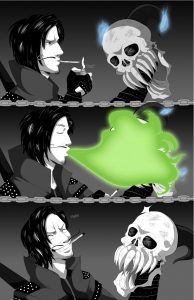 After some obligatory shit talking and the revelation Maz Latex seduced then stole a synthetic illicit drug prototype aptly named ‘Beast Mode’ from none other than Big Boss himself, a fight with no love lost is underway.  The incredible Rockabella proceeds to rip throats out as Diablo expertly places ammunition rounds into his competition.  Heads explode, eviscerated human remains gather on the floor of Da’ Fetish Queenz pleasure and pain palace.  Impulsively acting, Maz Latex pulls out her Trump card, and swallows whole, a vile of the experimental hard drug ‘Beast Mode’.  Almost immediately the once stunning yet soulless Maz is altered into an unrecognizable beastly entity.  Although Diablo is clearly and unexpectedly outmatched and muscled, he does not panic.  He actually almost seems to relish the challenge.  In distinct and determined fashion, the experienced Death Dealer dispatches the thieving vixen in a most bloody way, making his charismatic devilish grin appear in full force upon his face.

The Berzerk Death Dealer achieved within it’s very first volume some memorable kills and characters.  The fact the comic incorporated real life known actors was a pleasant addition.  The original and intriguing story is sure to promise an ample supply of battles involving Diablo and his trusty badass bitch Rockabella.

Comic artist Ashlee Galloway and Death Dealer brainchild Vishal Rajput come together exquisitely, meshing style and functionality with loads of bloodshed.  To proclaim I was pleased is a great understatement, it has honestly been many moons since I thoroughly enjoyed a comic or graphic novel, let alone one that gleefully boasts an undeniable link to our favorite genre.

Things can only get better for Galloway and Rajput, with time to effectively collaborate, sharpen their skills and pencils, and produce some evil, entertaining art.