The Blood-Shed goes to the Fair

The best 10 days of Summer.

Ah, the Fair!  The place where nightmares are born, questionable condiments that have probably been sitting in the sun all day, the porta potties, rickety rides that could break at any moment hurling people into the stratosphere, and then there’s the “Carny Folks.”  It’s an experience in and of itself that everyone should have at least once a year. 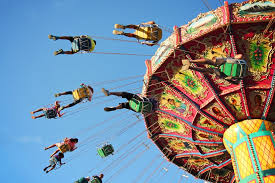 This year I decided to head on down to the Ionia Free Fair because, well I live nearby and I’m a sucker for that stand that will not only put anything you want on a stick, but also deep fry it.  I wasn’t sure what my next article would be, and with recent going ons in my life I’ve been lacking in the article writing department lately so I knew I had to write about something. 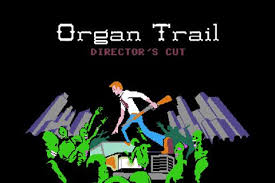 “This game came to mind, maybe next week.“

I never imagined the fair would be the inspiration for said entry until I walked past this mechanized terror orchestra composed of porcelain doll band members.  The fully automated machine, which is probably fueled by children’s tears churned out an eerie and chaotic carnival melody that gives you the feeling something is horribly wrong.  The cold dead eyes of the dolls staring into your soul is the only confirmation you need to know these little guys hop down after everyone leaves, and then probably commit atrocities against humanity. 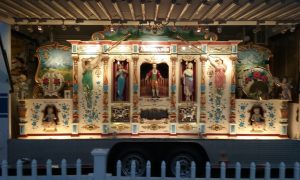 “Look upon them and know!“

As I continued my trek through the fair I expected to see a lot of the same stuff I always do, what I wasn’t expecting to see was a circus tent which had the inviting attitude of an old man’s front lawn.  You’re curious but know you probably shouldn’t.  It’s called Big Top Terrors and for anyone with Coulrophobia it’s a nightmare.  There is even a selfie booth just in case you need a pants soiling reminder that clowns are evil. 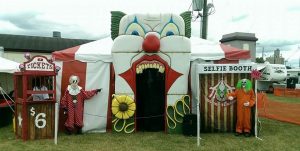 This place isn’t one of those extreme haunts where they basically get to assault you while covering you in pig’s blood, but what it is, is worth the entry price of $6.00.  A small, compact maze packed to the gills with clowns.  The various rooms, wrong turns, and dead ends aren’t plentiful but they don’t need to be, one dead-end is so small it can trigger anxiety in those uncomfortable with small spaces.  A single walk through can take less than five minutes if you rush through but where’s the fun in that? 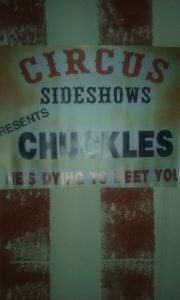 I don’t want to reveal too much or ruin the experience but what I will say is the pictures don’t do justice to the experience.  I had to use a flash which makes the environment brighter than it actually is.  In the dark, flickering light the clowns look a lot creepier and could even be questionably an actor holding very still.  You can’t really tell they’re fake until you get close to them, which is something I wasn’t in a hurry to do. 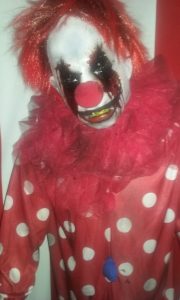 It would be one thing if it were only morbid and scary clowns everywhere but there are also decapitated heads, iconic juggling pins and bowling pins cluttering up your walking space.  This is so great because it helps obstruct your view until you’re face to face with one of those creepy clowns, which in the dark look like they’re one step away from laughing maniacally and lunging at you.  As a last effect, air cannons will shoot at you in certain places, the bang followed by the gust of pressurized air at your ankles will have you moving quickly to the next area by instincts alone.  This is a nice motivational ploy that also prevents you from looking too hard at any of the creepy decor, a brief glimpse of a chainsaw wielding clown is all you need anyways. 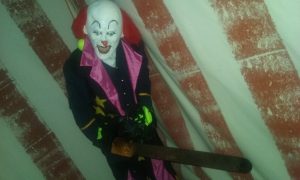 They should sell night lights at the exit.

Upon finding the exit, you’re greeted by yet another clown, this one more friendly than the others, but his smile is a lie and you shouldn’t trust him.  He isn’t gory and he isn’t undead.  My theory is he’s the mastermind puppeteering the others.  Once you get past him you have to push your way through a corridor that pushes back and then the sweet air of freedom awaits you as a reward. 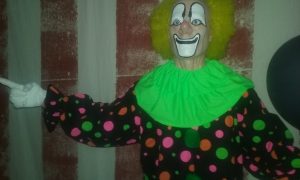 “This way to therapy.”

All in all the experience is very tongue in cheek and fun.  Had it featured actors instead of mannequins this would be a very different article.  It’s a good laugh for non-clown fearing folk and a low-level of scary for those who are.  I would recommend stopping in and checking it out with some friends, or even the kids because therapists need to eat too. 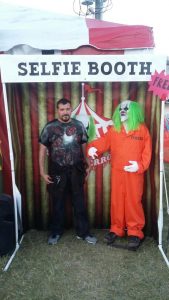 Me after my first time through the maze.

I spoke with Frank Stabile, owner and operator of Big Top Terrors and he commented on the switch from actors to mannequins. “We had one actor inside with the mannequins but children would come out the entrance screaming and crying.  We toned it down a little bit after that to make it more fun for everyone.”  Big Top Terrors is Grand Rapids based and are hoping to have a more permanent location at least during the Halloween season at the RiverTown Crossing mall in Grandville, MI.  I’m hoping they do secure some space and who knows maybe with more space they will have room for more twists, turns, and evil clowns.  When I asked Frank about Big Top Terrors he said “This is two years in the making.”  I’m assuming that means two years of trial and error to get the set up just right.  I wish I had asked a few more questions of Frank and his wife Amy, as to the inspiration, and history of Big Top Terrors.  Fortunately they have a page you can get more information from here.