Let the dead rest in peace

You know, people hate on remakes a lot. Some of the scorn is deserved (Halloween, Day of the Dead, etc) but some remakes turn out pretty good (Dawn of the Dead, The Thing, etc). So, usually I give them a fair chance and look before I loath.

Not so with the formerly forthcoming Crow remake. I say “formerly” because, praise Cthulu, it is officially canned! May it rot in hell! Yes, Relativity, the production company behind this abomination has been trying to get the damned thing made for years now. For awhile, it sat in development hell, no progress being made. I was content with that. But then it rose from the pits of limbo like some hellspawned… thing… and the wheels began rolling again. They actually had a full cast, a tentative date to start filming, the works! But then the star, Jack Huston, dropped out. Remind me to send him a thank you card, because his actions, coupled with Relativity’s crippling debt and seemingly impending bankruptcy, have finally sank this bad dream.

Now, you may be saying to yourself, “Johnny, you seem to have strong feelings about this subject. What’s up with that? What makes you hate this particular remake so much when you haven’t even given it a chance yet?”

Well, dear reader, The Crow is a bit of an obsession of mine. Read this article here for my in depth thoughts and feelings on it: A Look Back: The Crow

TL;DR? Let me sum it up for you. I was not concerned about the quality of this now deceased remake. I hold my judgement on quality until I have actually seen a film, as I said. But, and this is a huge but (giggity), unlike any other film that has been remade, The Crow had a man, a great man, a great actor, die during production. Brandon Lee, son of martial arts legend Bruce Lee, died on set during the shooting of The Crow, the victim of a freak accident due to the mishandling of a dummy gun leading him to be shot in the stomach. What would have been his break out role, his rise to stardom, was instead his demise. He gave his heart, his soul, and ultimately his life to an amazing performance of one of the most moving films of our time. And, like his character Eric Draven, he was engaged to be married. When the movie was almost scrapped entirely after his death, it was his fiancee, Eliza Hutton, who said no, finish the film, do not let his death be for nothing. And so it was finished and it stands as a monument to Brandon. It is his gravestone, his crypt, where his fans can most easily visit him to pay their respects to an amazing life cut short.

One quote from Brandon that I hold dear is as follows: “The key to immortality is to first live a life worth remembering.” He did. The Crow film ensures that he will always be remembered. And to try to remake this film, the film a man died during the production of, is grave robbery for the simple reason of profit. You might as well go to his grave site, dig up his corpse, stick it on a street corner, and charge people $10 (plus $20 for popcorn and small soda) to have their picture taken with him.

Have some damn decency. Let the dead rest in peace. Make all the shitty sequels you want. But leave Eric Draven alone. Leave Brandon Lee’s greatest and last achievement alone. 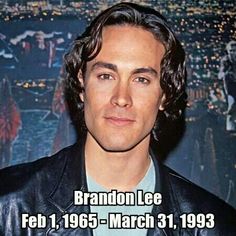 Edit: In response to reports of the remake’s demise, Relativity has issued a press release stating that the film is in fact only on hold and production will resume with or without them. A pox upon them. A pox, I say!