The Four Skulls of Jonathan Drake Remains Obscure for a Reason

Sometimes, in the search for a forgotten gem, we find something better left forgotten

Well, gotta watch something to review.  Turn to the shelf, look for something I haven’t watched.

Ah, two movie set, Vodoo Island and The Four Skulls of Jonathan Drake.  I have no recollection of purchasing this.  In my earliest memories, it’s just a thing on my shelf that I picked up somewhere.

I like the title The Four Skulls of Jonathan Drake, and it’s the shorter of the two movies, so here we go.

The Four Skulls of Jonathan Drake (1959) 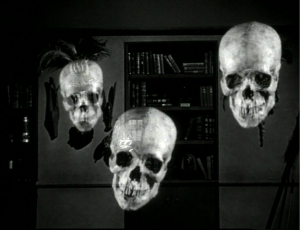 I should be in love with this image, but in the context of the movie… meh

Seventy minutes later, looking back on the introduction I wrote before watching this movie, I imagine if I’d known what I was in for, I wouldn’t have bothered.

How can a movie so fixated on decapitation and mysticism be so incredibly boring?

Flat, declarative performances of flat, declarative dialogue barely keep the lifeless narrative afloat, unaided by pedestrian, lifeless direction and photography.  Even such eerie and abject images as floating skulls and shrunken heads, or the late-stage revelation of one man’s head grafted onto another’s body, have no resonance, because we are given no reason to care about anyone involved, while the story progresses with neither pace nor energy. 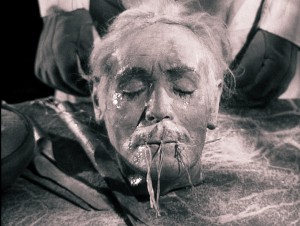 Bodily mutilation should never be this dull

The plot is focused on Jonathan Drake (Eduard Franz), last male in his family line; for generations, the Drake men have died shortly into their sixtieth year, and for generations the bodies have been decapitated after death, with their barren skulls mysteriously returned to the family crypt.  The most recent victim is Jonathan’s brother, Kenneth Drake (Paul Kavanaugh).  Now, Jonathan and his daughter Alison (Valerie French) seek to end the curse (a little late for poor Kenneth…) with the aid of Police Lt. Jeff Rowan (Grant Richards).  Rowan so often and so easily defeats the best efforts of the centuries-old murderers, Dr. Emil Zurich (Henry Daniell) and the witch doctor Zutai (Paul Wexler), that all of the macabre imagery in the world cannot make up for how inept their villainy appears. 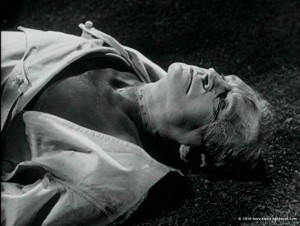 This shot gives away the ending, and I don’t care

All of the ingredients for a ghoulish classic are in place – perhaps ideally a twisted, sardonic comedy – minus any kind of passion for the subject matter.  Every element is functional at best, from the lifeless, expository script to the unimaginative production design, blocking and photography, through to the perfunctory editing.  The Four Skulls of Jonathan Drake seems to be a production on which nobody even bothered to try.

Want more reviews, plus news, discussions, and a lot more for the horror fanatic?  Keep on reading The Blood Shed, and check out our Facebook page!