Silent Screams – The Man Who Laughs

The paradise of the rich is made out of the hell of the poor.

We’re back in the 1920’s which means it must be time for another silent film.  For this instalment, I have chosen a really good film to look back on.  It inspired one of the most wicked and iconic madmen to ever appear in our comic books, and television screens.  I am of course referring to the one and only “Clown Prince of Crime” whose antics have plagued a certain vigilante with a bat fetish for decades.  Just about anyone who has portrayed the role has claimed that it messed them up one way or another. 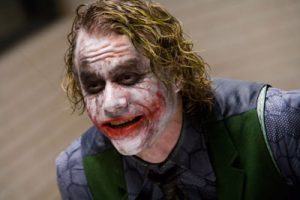 While it is no secret that over the years various artists have tried to hint at, reimagined, or even thrown out false truths about his origin story to keep the character planted firmly in an air of mystery, The Joker’s original concept and design came from this movie.  The two play so well together that I wouldn’t be surprised if The Joker isn’t actually just an ancient disfigured immortal jester who never got over being ruined for life by a spiteful king. 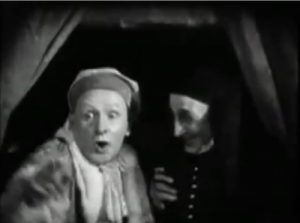 “I’m the one who gave him those scars.“

The man who laughs, based on Victor Hugo‘s novel of the same name is labeled as a drama, and one might ask why an article was written about it on a site dedicated to horror.  While others might argue that almost everything from the 1920’s is pure nightmare fuel.  I do not actually agree with either of these ideals, and yet this movie has a way of instilling a sense of fear any time Conrad Veidt is on-screen.  Conrad plays Gwynplaine, the aged son of a rebel, who was put to the sword.  Seemingly King James II, didn’t feel that making the child fatherless was a good enough punishment for the boy and so he had Gwynplaine horribly disfigured, forced to “Forever laugh at his fool of a father”

The real sense of evil doesn’t even really come from the cruel King James II, played by Samuel de Grasse, but more from the King’s jester Barkilphedro played by Brandon Hurst.  Within the first three minutes of the film we are introduced to Barkilphedro, whose jests are described as “Cruel” and his smiles as “False.” 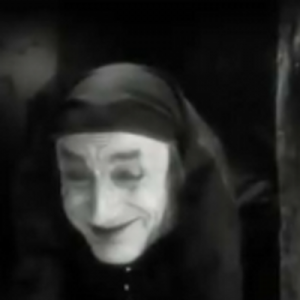 Does this look like the smile of an evil man to you?

Barkilphedro, appears as what is now a timeless staple in films, games, and other media; the puppeteer whispering in the king’s ear.  It is made clear at this time that Barkilphedro is encouraging King James’ actions and is the reason poor Gwynplaine gets a make over that ensures that even if he were being eaten alive by wild dogs, he’d appear as though he was having the time of his life.

“This is my sad face“

Cut to a snowstorm and young Gwynplaine who finds a mother frozen to death clutching a slowly freezing baby.  Gwynplaine takes the baby and immediately seeks shelter from a fellow by the name of Ursus, played by Cesare Gravina.  Ursus, who declares himself a philosopher but identifies more as a swindler takes both the infant and Gwynplaine in and raises them as his own.  The trio travel the countryside, participating in various sideshows and fairs.  It isn’t long until Gwynplaine and his disfigurement, courtesy of Comprachios become a famous attraction.  Dea, the baby saved by Gwynplaine, played by Mary philbin is revealed to be blind and has nothing but the highest respects for Gwynplaine who sees himself as nothing more than a hideous monster.  Dea tries to appeal to his humanity but he refuses to see, or rather not see what she does.

At one such sideshow, Ursus is approached by a man who answers to the name Hardquanonne, played by George Siegmann who insists on getting to know “The Laughing Man.”  We are treated to a series of going ons at the Southwark Fair, including little people, terrifying clowns and other sideshow attractions that were popular in that age.  It is here that we get a unique soundtrack of people bustling, talking and laughing that really help show the advances in sound recording not previously seen in many films from the same period.  Among all the activities, we see Hardquanonne tell what I can only assume is a messenger who has seen better days, that he must send word to the duchess immediately.  The next scene shows Dea and Gwynplaine speaking of marriage, only to be interrupted by laughter from the crowd which only helps to discourage their love. 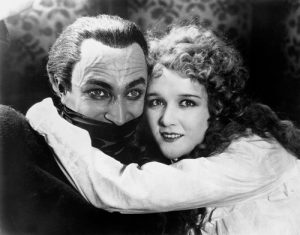 Ahh, true love is always better with a scarf.

The dastardly Dr. Hardquanonne whose wickedness knows no bounds quickly realizes Gwynplaine is the son of the once noble, turned rebel.  In order to keep his silence he demands a ransom.  If things weren’t bad enough already Barkilphedro reappears having aspired to a higher and more prominent status, giving him more ears to whisper deceit into.  He does a bang up job of making life difficult for our trio as well as the not-so-good Dr. Hardquanonne.  The movie continues on this theme of betrayals and hardships for its entirety, leaving poor Gwynplaine in one bad situation after another.  For a guy who was orphaned at the age of 10, horribly disfigured, and ultimately banished from his country by the end of it all, he somehow manages not to go all Punisher on the entire royal family and instead decides to flee with Ursus and the lovely Dea.  The movie ends on this note allowing the viewers to write in their own happily ever after for the group.  If you enjoy “Happily ever after” endings I’d suggest never reading the book. 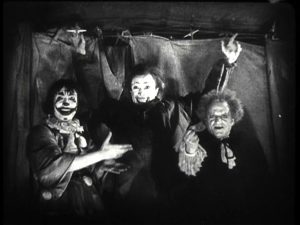 Spoiler: Dea dies at sea and Gwynplaine drowns himself from grief.

This is among one of the better films of its time, and while it doesn’t boast an evil monster picking people off in an isolated cabin, it is the stuff that tragedies are made from.  From the first time to the last time Gwynplaine appears on the big screen, he has nothing but hardship, heart-break, and misery.  The story is strong, the acting is on par with other films of the time and it carries with it a creepy undertone guaranteed to give you chills.  The Man Who Laughs may not stand the test of time as the film it is, but thanks to Bill Finger, Bob Kane, and Jerry Robinson our laughing man will be laughing for many years to come.