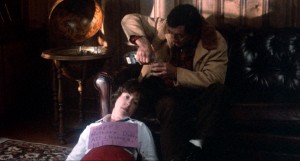 As a special birthday gift for his father, Big Ed (Jack Chatham), young Ed Jr (Trace Cooper/Matt Mitler) decides to clean his father’s guns while his Mother (Pamela Weddle-Cooper) ices the birthday cake. Like any normal kid, Ed Jr aims at the closed door and pulls the trigger not realizing it is loaded and inadvertently kills his Mother. When Big Ed arrives home with his latest bounty of 2 dead ducks, he discovers the body of his wife and goes insane. He pushes his son out of the way and drags the corpse into the den and begins drinking.

Many years later, during Fall break, Ed Jr and his girlfriend, Pam (Ruth Martinez) and their friends Ralph (Bill Hitchcock), Sue (Connie Rogers), Linda (Frances Raines), and Mike (Morey Lampley) are all sitting in a bar lamenting about having nothing to do during Fall break from school. Suddenly, Ed gets a call from his Father, whom hasn’t spoken to him in years, and asks Ed to close up the beach condo for the winter. They decide to make a weekend of it, and head down to the beach. Little 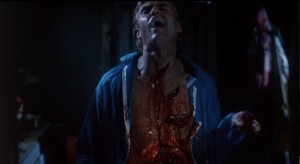 do they know, Big Ed is lying in wait for them in a room in the garage with his favorite battle axe, pitchfork and gaff, waiting to take his revenge for the death of his wife.

It was the early 80’s. Everyone with money and an interest in film wanted to make the next Halloween or Friday the 13th. Enter Buddy Cooper. With much of his own money, his own script, a general know-how of filmmaking, and a can-do spirit, he got the ball rolling on The Mutilator.

The film itself is just ok. The characters are pretty run of the mill, with no real substance outside of Big Ed. The story is interesting in that the Father wants to kill the Son, and takes out all the friends to get to him. The special FX by Mark Shostrom (Evil Dead II, Phantasm II) are the driving force, as the viewer finds themselves waiting for the next gruesome kill, with the gaff kill being particularly one of the nastiest. 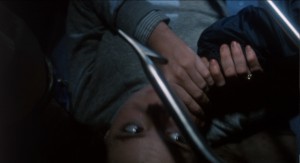 With all that being said…this Arrow Video release is pretty incredible. The director approved 2K transfer is really nice and clean, though with some film artifacts like lines, or minor dirt, and the uncompressed 1.0 original mono soundtrack is clear. It’s also bursting at the seams with extras. The feature length doc, “Fall Breakers: The Story of The Mutilator,” is particularly enlightening, and the fact that half of the cast was still willing to fondly reminisce is pretty rad. The Mark Shostrom doc, “Mutilator Memories,” is another awesome piece in which Shostrom talks about The Mutilator being his first Slasher film he worked on. At that point, he had been in the industry for about 3 years. He also talks about some FX of The Mutilator that didn’t work so well, like propeller kill.

Even though The Mutilator is not my favorite Slasher, this Arrow Video release definitely gives it a boost. As I’ve learned 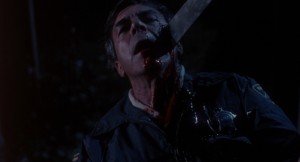 throughout the years of being a Horror fan: Every film has a fan; even if you think it is the worst film ever made, it is someone else’s favorite. Fans of The Mutilator are going to be chomping at the bit this coming Tuesday the 16th to get their hands on this semi-obscure early 80’s Slasher gem that’s been given the complete restoration fans will love.