Is this a game to buy or one to watch?

When The Order 1886 was first shown at E3 two years it was a jaw dropper! It looked unbelievable from the graphics to the atmosphere this was a game that is designed for the future. Upon the release of the game numerous information leaked from videos to actual game length. The only question is how is the game now that it is being released tomorrow?

Story
The Order 1886 is a single player third person shooter that is set in an alternate history of London. An order of Knights have been out protecting the world from a half breed of monsters (in this lycans). You play as Sir Galahad a leader of a four man group to battle these creatures. Of course you don’t just battle monsters but rebels as well. The story has a pretty interesting back story about how the Knights were started and it goes all the way back to King Arthur and his knights. I don’t want to spoil too much but this story has some pretty interesting takes on history and leads up to a possible sequel.

Gameplay
This title plays like other third person shooters not much variety. Your character can carry four weapons a primary, side arm, two different types of grenades. The controls play like most other third person shooters more specifically gears of war. There is a cover button that goes back in forth between cover that is next to you, never in front of you for some weird reason.  In this alternate London weapons have been changed there is the basic machine guns and pistols but now  Nikola Tesla helps create some unique weapons from lightning guns to a thermite rifle that will set enemies on fire. The only problem is that they are very limited in use and are only available in certain parts. There is no inventory that you can swap weapons or upgrade, you play what they give you and switch from enemies.

Graphics
OH MY GOD this game looks gorgeous! This game runs at smooth 30fps and the level of detail is absolutely outstanding. From the outfits to the dust particles there is a level of expertise in detail of which a game has yet to been seen. The transition between cinematic and gameplay is so smooth you will sometimes forget to play and die from the quick time events (Pay attention). That is also where the game hits a downfall, as the game is big in cinematics there is at times too much and I just want to play. The levels are greatly structured but have a look and don’t touch feel. If anything this game is a treat for the eyes.

Final Thoughts
As The Order: 1886 goes this game has a great story and unbelievable graphics but with a so-so gameplay and very linear levels, this is has little replay value. The sad part of the game is that it will take you between 7-8 hours and you are paying $60 for it. That has fueled a lot of debate about why we need to pay full price for only an short game. That is a conversation for another day, anyways this game is about showing power of the PS4 and sure as sugar does. If anything this is Sony’s answer to Xbox’s launch title Ryse which was a graphic powerhouse. This game is a treat for the eyes and definitely deserves a play through wether or not you like werewolves or shooters, this really shows what the next gen can give us. I order this game a 3 out 5. 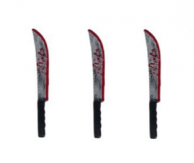