The Terminator will be a Playable Character in WWE 2K16

He said he would be back...

Arnold Schwarzenegger makes his return to WWE in Terminator-like fashion this October.

If you pre-order WWE 2K16 before its release on October 27, 2015 you will have two versions of the T-800 Terminator character to play with in the game as bonus characters.

Arnold Schwarzenegger first appeared in WWE in 1999 and promoted his movie End of Days. After taking a seat at the announce table, Arnold provided commentary and eventually got involved in the match by throwing Steve Austin a chair which was used to neutralize Triple H. 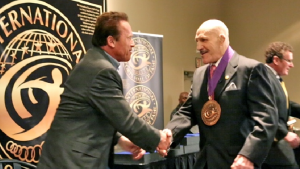 Arnold is a long time fan of the WWE, and they have been on great terms. Check out this recent Tweet from Arnold showing his excitement to be involved with the game, and the recently filmed promotional trailer. It is a reenactment of the bar scene from Terminator 2 featuring WWE superstars.

Pumped to be part of @WWEgames #WWE2K16 as the Terminator. So much fun recreating this scene with @WWE superstars. https://t.co/2ipHEl1A45