Thirty years of history are about to catch up to Helen

“But she’s alone! She’s been alone down there for thirty years!”

“She’s not down there, Helen. They fished her body out at the same time that they saved you. You know that. You told me that.”

Helen looked over the edge of the bridge, into the softly tumbling water below.

Ryan thought this might be his chance. But, as she looked, Helen pulled the baby closer to herself. He couldn’t let this turn into a brawl; he couldn’t risk the baby being dropped.

He’d felt uneasy about her reluctance to give their daughter a name. But waiting a little while to choose a name wasn’t so unusual, was it? He’d told himself not to make too much of it.

And now here they were, standing on that bridge, and he knew that for thirty years, since she herself was just a few months old, Helen had never completely left this place.

“They took her body, but she wasn’t in it anymore. She was in the water. She’s still in the water. And I was supposed to be there with her.”

But branches and brambles had slowed baby Helen’s fall, and she’d ended up on the soft bank, bruised and broken, but alive.

If her mother had thrown her a little farther, given it a little more muscle, she would have cleared the branches and brambles, and then she would have been released into the water.

But her mother saved all that strength for her own leap.

Helen wouldn’t be so selfish. This wasn’t about her. This was about correcting her mother’s mistake. Helen’s own baby would be released into the water, and there she would meet Helen’s mother, and they would be together with the water.

And Helen would be alone again. She wouldn’t even have Ryan anymore, because he wouldn’t understand. He thought that the baby belonged with them; he didn’t understand how much happier the little girl would be in the water, with grandma.

And there was no place for Helen in the water. No place with the mother who hadn’t loved her enough to throw her past the branches and the brambles.

Helen would give all of her strength to that throw.

She would spend herself completely, and then she’d be done. She’d have made up for those thirty years. Mommy wouldn’t be alone anymore.

“Helen, just give me the baby.”

“She’s not mine to give, Ryan. She’s not yours or mine. She belongs to my mother. She always has. Thirty years is a long time to wait.”

Helen was frozen for a moment. She was pale and lifeless.

Then she was red and animal.

“She’s not yours to name! She’s nobody till she’s with my mother!”

“She’s Kathleen, Helen. She’s our daughter, and her name is Kathleen.”

Helen looked at the baby’s face. Really looked. She hadn’t done that before.

She smiled as the tears began to creep.

And she handed the baby to Ryan. Neither of them should be alone.

And Kathleen did not belong to the river.

Ryan embraced his daughter, and smiled at Helen.

And Helen smiled back. She breathed deeply and held back the tears.

And then, with all her strength, she threw herself into the slow, tumbling water where her mother waited for her. 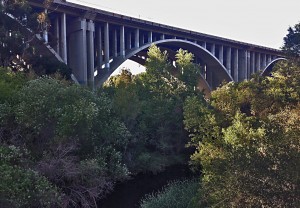 For more short stories, plus poetry, news, reviews, history, editorials, analysis… basically any kind of horror stuff, you just come on back to The Blood Shed, k?  And don’t forget to go “like” our Facebook page!