"In the end, chaos will find you"

A popular film at this year’s Sundance, I Think We’re Alone Now takes a look at someone who is settled in a world after the apocalypse, and doesn’t really want to share it with anyone else.

The official trailer looks haunting and with the combo of these two incredible actors, this film really has me excited for the end of the world! 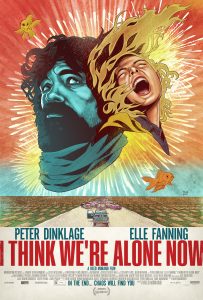 SYNOPSIS:  Del, played by the amazing Peter Dinklage, is the last man on earth. After the human race is wiped out, he lives in his small, empty town, content in his solitude and the utopia he’s methodically created for himself — until he is discovered by Grace (Elle Fanning), an interloper whose history and motives are obscure. Worse yet, she wants to stay.

Check out the official trailer here!

and in Select Theaters Nationwide and Available Everywhere On-Demand September 21, 2018