Canada's MORTÖR about to release a slice of thrash death metal brutality!

Canada’s MORTÖR are about to release a slice of brutality. Thrash death metal for the metalheads out there! Fans of Testament, Kreator, Tankard, Sepultra, Exodus, Misery Index, and Destruction alike will likely enjoy this release. The growling of low register, heaviness soaked electric guitars. The pummeling drums and blast beats. The jagged, cutting basslines. They all come together, the bubbling complex riffs and fast tempos offering a refreshing blend of heavy metal. On April 21st, 2017 MORTÖR will….BURN UP THE DEAD.

The blend of thrash and death metal is a welcome one. For any metal head, they know – so much has been done. So many great bands dot the landscape of our great genre. So at this point in time, change is almost necessary to stand out. Blending the brutality of death metal with the maniacal energy of thrash metal is one of my personal favorite genre mashups. The two aesthetics supplement each other wonderfully.

The internet swirls with words of their live performances. A party like atmosphere supplemented with maniac brutality. Sounds like my kind of pit scene. BURN UP THE DEAD will be MORTÖR’s third album, a follow up to 2010’s METAL RIDE and 2012’s SHOOT ‘EM UP. Fans should expect them returning more viscous than ever. The album will offer listeners more of the same from the band’s first two releases, while also moving the sound forward. The words “dynamic” and “organically diverse” are just as apt to describe the music as are “head banging catchiness” and “epic brutality.”
A pre-order for BURN UP THE DEAD is available at CDNRecords. Check it out here! Now that I’ve given you a bit of background, I’m going to write some thoughts while listening.
The album hits the ground running with “Pleasure of Hate.” The production is crisp. Pleasant to the ear. The heavy guitars buzz and blister. The bass has a certain clang and punch to it. This is all accentuated by the pounding drums. The riffs are interesting and hook-laden. Catchiness is not sacrificed for brutality. The second track keeps the momentum up. “Cross the Line” moves from stop-start riffs into a blistering thrash passage. Then it moves towards death metal brutality…only to come back to thrash. This sort of song structure keeps things really interesting. The blending of various heavy metal subgenres and moving seamlessly between them, MORTÖR keeps the listener intruiged, head banging to each new interesting riff.
And so the album lurches forward with Burn Up the Dead. The vocals hit a new intensity as the albums namesake is growled in the intro of the track. More thrash riffs dominate the track. (Being a traditional guy I also think a bit of Priest’s Painkiller in some of the riffs of this track.) This track features an excellent guitar solo – short and sweet. It’s a good blend of shred and melody, provided by guitarist Antonin Perras-Foisy.
“A Place In Hell” continues the catchy thrash death metal brutality. This album certainly keeps the listener engaged and pumped up. This would be great workout music, get this sent to gyms immediately. This track features another awesome guitar solo, great dual harmonized licks. This solo was provided by one Christian Donaldson. The album finally slows down a bit for the next track, Hail Guns. We get a bit more groove on this one. The double bass sounds a bit like a “half-time blastbeat,” and some stellar fills spill into a double time, bringing the pace back up, before bringing it back down again. MORTÖR prove time and again that they can compose some MEAN riffs. But it all serves a purpose. This is functional brutality. Each song is strategically composed. Each composition has an interesting structure. No riff or movement overstays it’s welcome. One epic riff spills into another seamlessly, each idea sustaining my attention.
This album is a joy to listen to. From the spiraling dual guitar leads on the blistering track “The Executioner” to the final growl of “Beg for Lead” the band keep things varied and interesting. But never straying too far from their signature sound, and it’s a good signature. 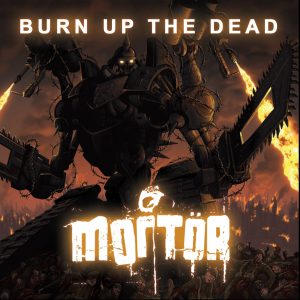