"Why should you get to have it all?"

Ti West’s X– is a tense and sexy slasher that exceeded all my expectations! X is the best homage to The Texas Chainsaw Massacre that I’ve ever seen, and I’ve seen them all!  Deeply shocking and unsettling at its very core, this is my favorite horror film so far this year.  I loved the characters, the easter eggs for other great films, the retro cinematography, and the absolutely stellar SFX! Slasher films are a ubiquitous part of the horror world, and this film will sit proudly with the best of them. 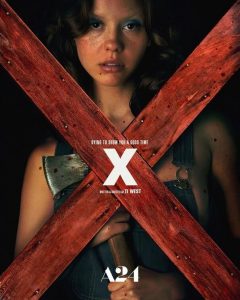 The idea of sex as a horror trope is not new, but in X, it is taken to another level. When it’s obvious there will be sex scenes in a film, I am sometimes wary. Horror films are well known to throw in gratuitous sex, for no other reason than to attract teen boys. But in X, sex is the narrative. So, when they add in intriguing characters, a layered story, and major twists and turns, I was left hanging on the edge of my seat ‘till the very end.

Official Synopsis: A group of actors set out to make an adult film in rural Texas, under the noses of their reclusive hosts — an elderly couple with a farm and boarding house for rent. But when the couple catches their young guests in the act, the cast finds themselves in a desperate fight for their lives. 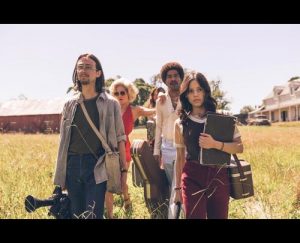 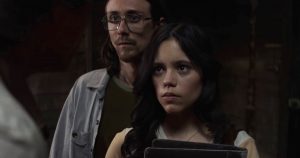 At that point I laughed out loud at the beautiful irony, knowing they are about to become part of a horror story. 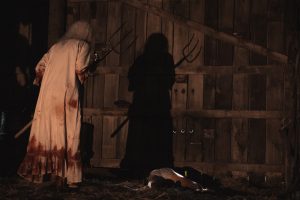 What also makes this movie a favorite of mine is Pearl. Howard (Stephen Ure) and Pearl (Mia Goth, playing a double role) own the farm where the kids are filming. Howard warns them not to disturb his wife, she is easily bothered by people like them. What we come to learn is that frail little Pearl is a vengeful, jealous old woman who is watching their every erotic move. She is attracted to Maxine and tries to relieve her sexual tension by doing her makeup and making herself sexy for Howard, who turns her away because he has a bad heart.

At first, it is easy to feel sorry for Pearl, I understand how it feels to look in the mirror and be disheartened by what the years have done to my body. She is just a little old lady; how dangerous could she be? That’s what makes this movie so disturbing. When we see what kind of a psychopath Pearl is, our sympathy for her goes out the window and all we can do is silently urge them to run! 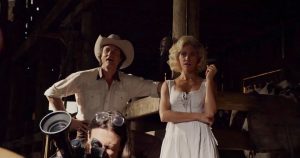 X is also a love letter to independent filmmaking. The excitement from the actors, the pep talks from the director, and the naiveté that they just have to make a great film here this weekend, and they will all be Hollywood stars. I’ve worked on many indie sets, and that feeling was in the air on all of them. We all come to make a masterpiece, but even if it’s not, the journey is worth it, every step of the way. The film also explores what is right and wrong. What is acceptable and what is taboo? Which is worse for us to be watching; the naked human body, or the bloody destruction of one? 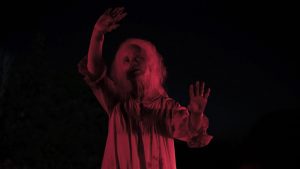 I do wish the film could have delved a bit deeper into Pearl and Howard’s characters and how they came to be there alone and so unhappy. Were they once successful? We know Pearl was a beautiful dancer, but what did she give up on in life to get to this point? And I wish the choice of who to play Pearl would have been that of a real older actress. There are so many out there that could have been perfect, and I feel like this was a genuinely missed opportunity on Ti’s part. It didn’t need to be a horror icon; it could have been one of the hundreds of talented older women who still want to work. I get that it was probably done on purpose, the juxtaposition between age and youth. But an older actress would have taken a movie that I do love, into an almost perfect horror endeavor.

With impressive doses of pure gore, a unique killer, a charismatic cast, and some of the most amazing practical effects I have seen in a while, X is pure joy for slasher fans of all ages!

A24’s X arrives today as a Blu-ray Combo Pack (plus DVD and Digital)
and DVD, from Lionsgate.

Photos courtesy of Lionsgate and A24