While many horror movie villains are consummate loners (like Jason Voorhees, Michael Meyers, and Freddy Krueger) others benefit from a sidekick or a lieutenant—in other words: An evil henchman.

One character from horror especially has become nearly synonymous with the term “evil henchman”; I’m talking, of course, about the diminutive hunchback: Igor. He’s most commonly associated with Dr. Victor Frankenstein, which is ironic since the source material, Mary Shelley’s novel, has no such character. Dwight Frey was the first actor to portray a hunchbacked lab assistant in the first film in the Frankenstein series (1931), though he was first named “Fritz”. The sequels, Son of Frankenstein (1939) and The Ghost of Frankenstein (1942), featured a character named “Ygor”, played by Bella Lugosi (we can assume the name was changed as the Europe and America crept towards WWII and the name “Fritz” became a pejorative for a German soldier). Universal cemented the imaged of a hunchbacked lab assistant to the “mad scientist” in the series House of Frankenstein (1944).

Since then, the archetypal “Igor” has appeared in numerous horror movies and parodies including: House of Wax (1953), Young Frankenstein (1974), The Rocky Horror Picture Show (1975), and The Nightmare Before Christmas. Daniel Radcliff is set to portray Igor in an upcoming adaptation of Frankenstein by Paul McGuigan, set for release sometime this year; apparently, we will be given an actual backstory for the physically challenged yet enthusiastic assistant.

Since Igor is the most famous but hardly the only horror movie sidekick, this list acknowledges other notable evil henchmen, beta-wolves who enjoy standing proud at their villain’s right hand.   A good henchman’s contributions to a wicked agenda cannot be overstated. Enjoy! 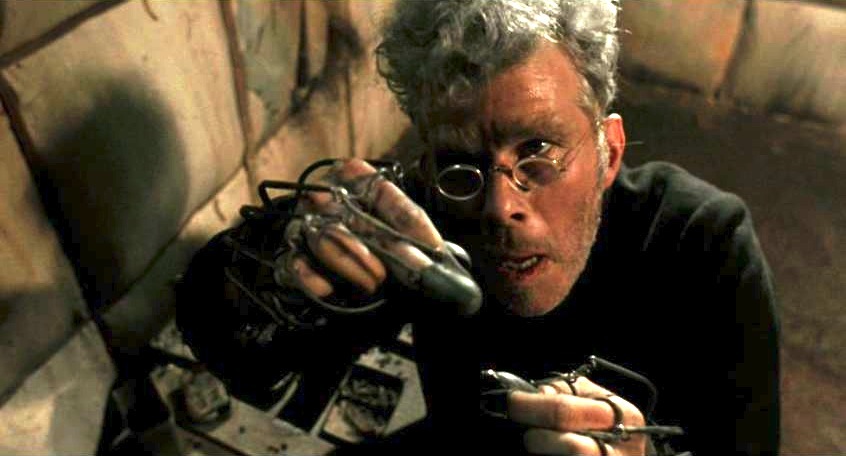 Perhaps the most famous henchman besides Igor, R.M. Renfield is a “zoophagous maniac” who serves Count Dracula. Unlike Igor who was created in Hollywood, however, Renfield actually is a character in the novel by Bram Stoker. My favorite portrayal of the interred madman comes from Frances Ford Copola’s 1992 version of Dracula, where he’s played masterfully by Tom Waits. Whether Renfeild was insane before he came under the Count’s spell depends on whom you ask, but in Copola’s Dracula, he was Jonathan Harker’s predecessor. Like Dracula himself, Renfield consumes lower life-forms (in his case, insects and birds) in the hopes of absorbing their essences. 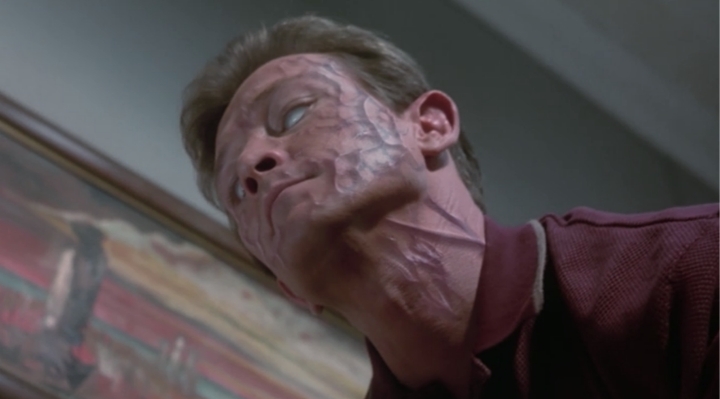 Horror/sci-fi regular Robert Patrick is chilling as Coach Joe Willis in The Faculty; sure, there’s usually something intimidating about coaches (probably stemming from innate aggressive behaviors and veiled threats of violence), but Coach Willis is another beast all together. While he’s obviously under alien control (spreading a parasitic extraterrestrial infection throughout the film) the real mystery of The Faculty is figuring out whom he serves.

Malachi (played by Courtney Gains) in Children of the Corn (1984) 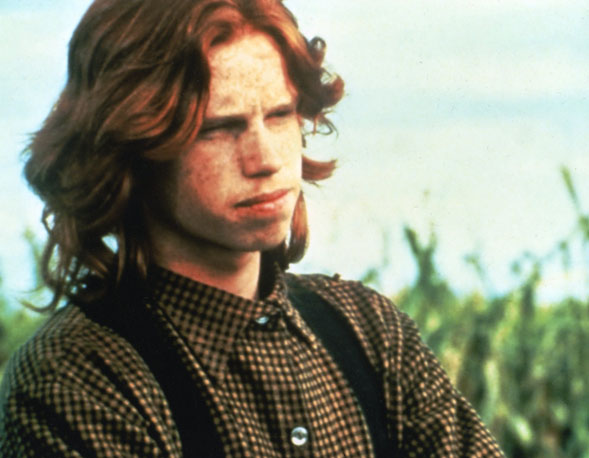 You don’t necessarily have to be an adult in order to be a top-notch horror movie villain—or an evil henchman. Case in point: Isaac and Malachi from Children of the Corn. Isaac (played by John Franklin) is definitely one of the creepiest kids in horror, but his lieutenant, the ginger-haired Malachi, is extremely scary. Isaac’s harrowing religious mania is matched and enhanced by Malachi’s prominence as an enforcer, and together they rule the isolated community of Gatlin, Nebraska, serving “He Who Walks Behind the Rows” and keeping the town free of “outlanders”. 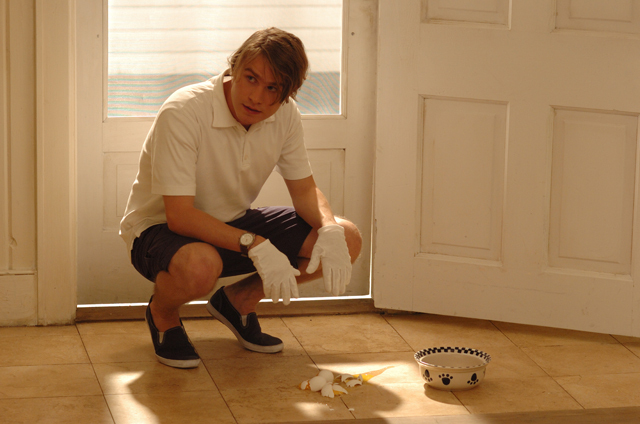 You don’t have to be terrifying or outgoing to be a good henchman; some of the most chillingly effective henchmen are the one’s with almost no personalities of their own, the ones who define themselves as mere tools for their master’s bidding. Take Peter from Funny Games, for example: While Paul is clearly the ringleader, it’s Peters willingness to follow orders blindly that makes him a great henchman, and a dastardly antagonist. Peter kills with an emotionless nonchalance that’s utterly unnerving. If a couple of young men ever come to your house asking to borrow a few eggs, lock the door and call the cops! 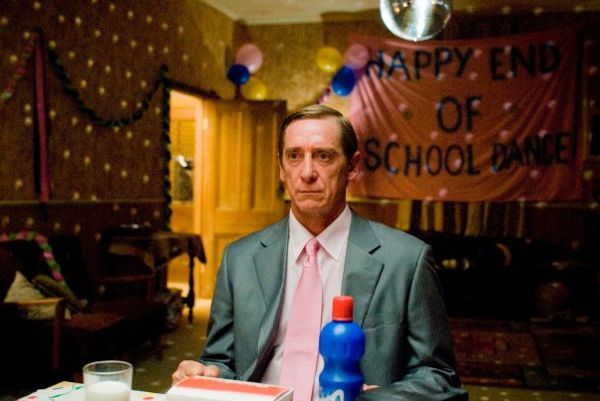 Subservient children serving tyrannical parental figures are not uncommon in horror, which makes Lola’s Daddy in The Loved Ones a complete subversion of the archetypal evil henchman. The extremes he goes to in order to please his “Princess” are absolutely shocking; he’s literally a slave to his daughter’s manic (and psychopathic) teenage desires. Exploring why he’s so submissive and the extent of his fatherly love will definitely make you feel disgusting. Still, this unassuming father-daughter combo is one of the most uniquely compelling evil duos in horror. If you’re a high school student and Lola asks you to prom—you had better say yes. Because whatever Lola wants, Lola gets—Daddy sees to that! 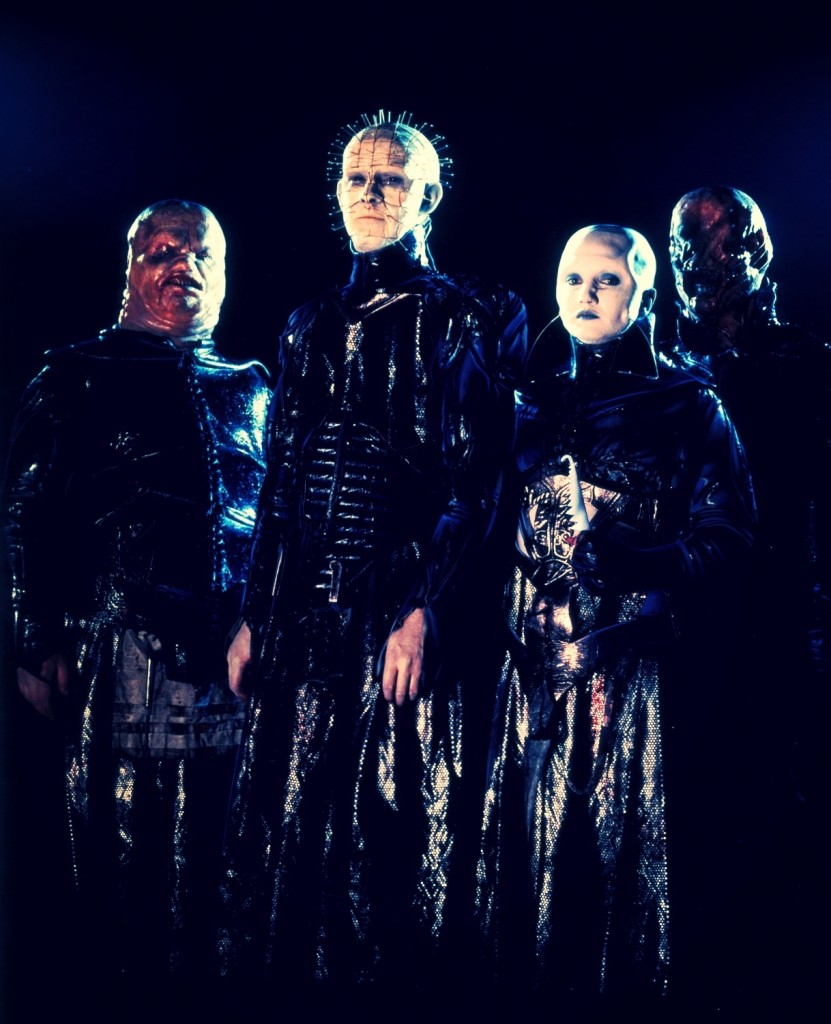 While all the Cenobites in the Hellraiser franchise are chilling and compelling in their own ways, the original quartet will always be the most quintessential. Hell’s High Priest (Pinhead, played by Doug Bradley) is perfectly complimented by his three henchmen: The bald yet beautiful Female (sometimes referred to as Deep-Throat), the hideously obese Butter Ball, and the imposing Chatterer comprise perhaps the most horrifying crew of demons ever assembled. All have a stately, almost regal demeanor, that stands in stark juxtaposition to their copious bodily mutilations.   If you knock on Hell’s doorway, expect to be greeted by this fearsome foursome. 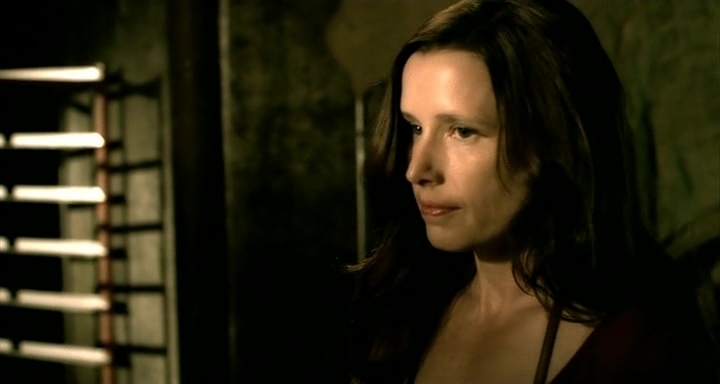 One of the most shocking twists in 21st Century horror has to be that moment when assumed “Final Girl” Amanda Young is revealed to actually be Jigsaw’s protégé at the end of Saw II. Her evolution from victim in Part 1 to evil henchman in Parts II and III makes her an especially intriguing case study. While her inability to abide by an established set of rules ultimately leads to the termination of her partnership and her life, her presence is felt throughout the entire Saw Franchise, often reappearing in flashbacks. Amanda proves that sometime the best henchman for the job is a woman! 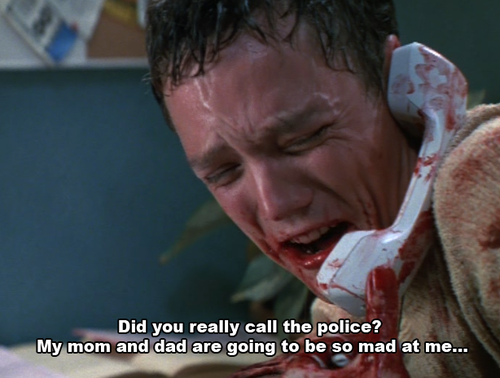 Just as Wes Craven’s Scream was a noteworthy spin on classic horror movie tropes, Stuart is a similarly unique and important henchman; his extreme enthusiasm, which is incongruent with his complete lack of personal motivation, makes him one of a kind. We know why Billy donned the Ghostface costume (revenge against Sidney for the fact that her mom had an affair with his dad) but Stuart is completely unconnected to these past events. His motivation seems to be the sheer thrill of the kill; the fact that he even assassinated his own extremely beautiful girlfriend, Tatum (played by Rose McGowen) illustrates his complete commitment to Billy’s agenda. The other important lesson Stuart taught us is to especially suspicious of masked villains: There may, in fact, be more than one person sharing the same disguise; henchmen make excellent stand-ins. 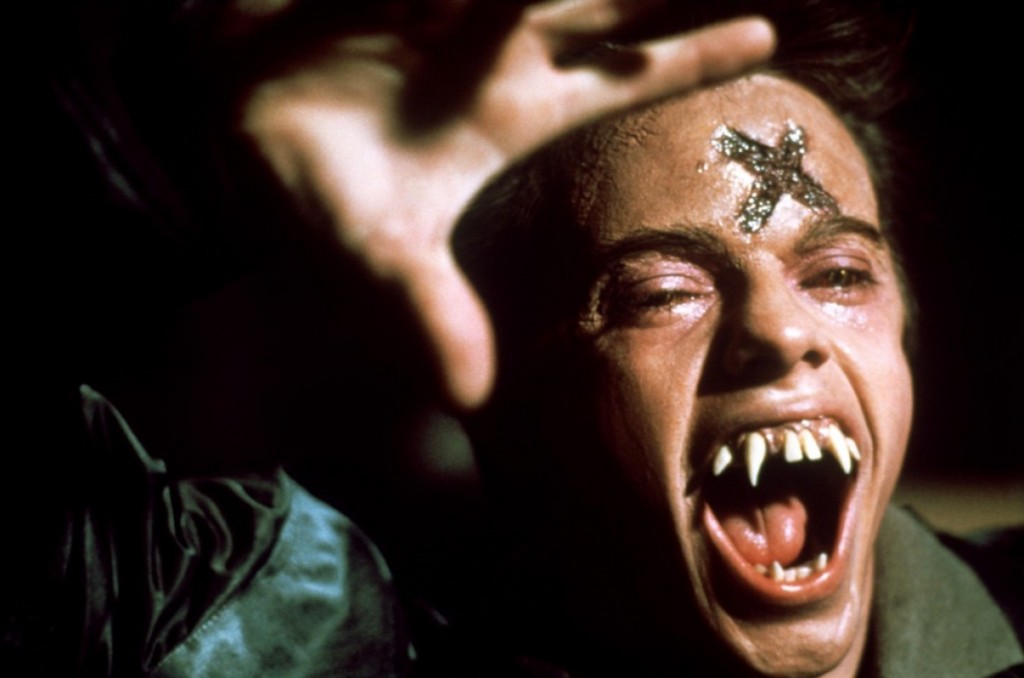 Suburban Vampire Jerry Dandrige (played by Chris Sarandon) already had a henchman in tow when he moved into the neighborhood, but carpenter Billy Cole (played by Jonathan Stark) was pedestrian to the point of banality. Perhaps that’s why he decided to recruit the odd yet charismatic “Evil Ed” Thompson into his crew by turning him into a blood sucking subservient. Evil Ed is one of those supporting characters who managers to outshine a film’s star players by giving a spirited yet genuine performance that never quite goes over the top; he’s both unnerving and pitiable. His scarred forehead, crooked fangs, and maniacal laugh make him one of horror’s most memorable henchmen. 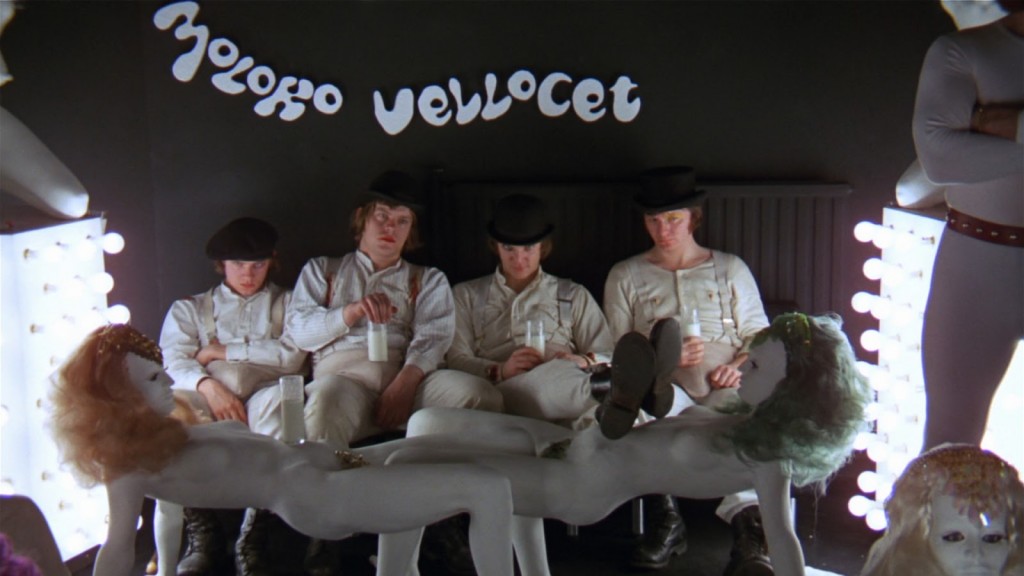 Dystopian gang-leader Alex (played by Malcolm McDowell) relies on his band of “droogs” to provide the necessary muscle-power for preforming acts of “ultraviolence”; when combined, they unleash a particularly ruthless brand of pack-mentality, feeding off of one another’s energy.   True, the droogs aren’t always 100% loyal, but they’re at least weak-minded enough to pull back in line when they stray. If your henchmen can’t be trusted, they had better be easy to control.

Who are some of your favorite evil henchmen? Sound off in the Comments Section!