Blood-Shed Members Beware, You're in for a Scare

As a child of the 90’s and early 00’s, and a fan of the macabre, R.L. Stine had a huge impact on my life. The extremely prolific author has his name stamped on numerous series.  Mostly Ghostly, Fear Street, The Nightmare Room; all classics, but all a candle in the wind to the monstrous force that is Goosebumps. Known for their twist endings, cliffhanger chapters, and creative monsters, they quickly became some of the best selling children’s books of all time.

With a new film coming out tomorrow, there has  never been a better time to look back at this influential book series. And while there are many, many books in the series, I’ll be picking my selections from the original 62. So without further to do, here are The Top Ten Goosebumps books in all their spine tingling glory! 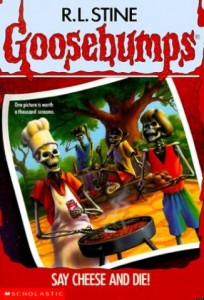 Even if Stine ripped off an old Twilight Zone episode, Say Cheese and Die is still a pretty interesting premise. Focused on a Camera that takes pictures of the future (and changes it for the worse), Cheese was a strong early outing for the budding series, showing a creativity that later books would hone in on. No one actually dies, but the camera causes plenty enough havoc, up to and including breaking some poor kids neck; pretty standard hi-jinks as far as Goosebumps goes. Overall, a decent book built on a particularly strong premise.

9. The Horror at Camp Jellyjam 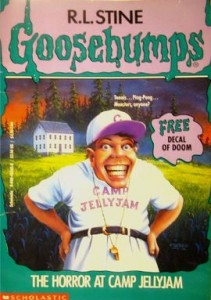 Asides from the obvious pedophile on the cover, The Horror at Camp Jellyjam is often overlooked in the canon of Goosebumps literature. Based around a weird sports camp where large numbers kids tend to go missing, Jellyjams most notable part is it’s monster.  In the center of the camp is the monstrous purple blob King Jellyjam, who enslaves children and eats the one’s that can’t keep up. Damn Goosebumps, that’s harsh as f**k. It takes mad balls to make a children’s book where kids are straight up f**king eaten alive, but Stine got ’em. Although probably most notable for the monster, this is just an overall solid entry. 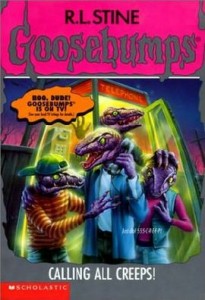 One of the original series more creative outings, Creeps follows bullied teenage journalist Ricky after he uncovers a secret conspiracy of lizard people that have invaded his school. An overly complicated set up leaves the reptiles thinking Ricky is their leader, and they task him with feeding poisoned seeds to his classmate, so that they will turn into creeps as well.

Ricky at first does his best to sabotage the lizards, but his tormentors are unrelenting. Eventually Rick shrugs his shoulders, says “fuck it” and and in a surprisingly chilling ending, feeds a batch of poisoned cookies to all of his bullies dooming them to become to reptilian slavery. I was once a rather beaten on student journalist myself, and Ricky is a sympathetic character; enslaving people isn’t normally cool, but in this case, they were all assholes anyway. Good for you Ricky, good for you.

7. Attack of the Mutant 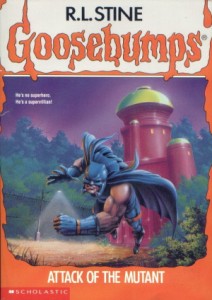 Despite being more of a dark superhero story than straight up horror, Attack of the Mutant is something special. Skipper, are overweight and comic infatuated protagonist, has the chance to live what has long been every nerds wet dream: going into an actual comic book. Unfortunately for Skipper, his favorite comic stars mass murdering super villain The Masked Mutant.

Only Skip and Galloping Gazelle, the fastest man alive, can stop the mutant from entering the real world and slaughtering everyone. Overall, this is actually a pretty fun little superhero story. Maybe it’s not your typical Goosebumps book, but Mutant is one of the most enjoyable of the series. Plus Adam West was in the tv episode, and thats badass as hell.

6. Piano Lessons Can Be Murder 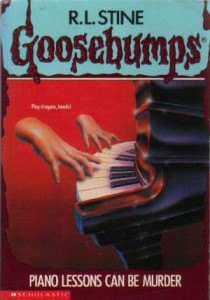 This one is f**king hilarious, even if it’s somewhat unintentional. The completely perverted Dr. Shreek provides the most accidental laughs, spending most of the book complimenting and stroking the pre-teen protagonists hands. Some serious Buffalo Bill shit starts to go down as we learn the good doctor has been slicing off peoples hands and using the disembodied mitts to play the piano. Its actually a pretty horrifying idea that seems more at home on Criminal Minds than kids fiction, but Stine makes it work.  Toss in a couple of ghosts walking around showing off their bleeding stumps and you have one of Goosebumps creepiest books. 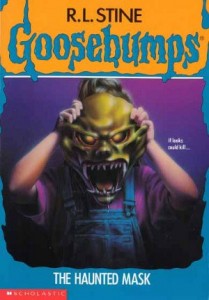 One of Goosebumps most iconic novella’s is also one of it’s best. Starring Carlee Beth and the titular possessed headgear, The Haunted Mask is a surprisingly touching little story on the perils of revenge, and the importance of being true to yourself. The Mask itself is a sentient being that feeds on fear, driving whoever wears it to commit terrible evil (well, terrible evil by Goosebumps standards) until it permanently attaches itself to the host.  Only an act of love can make it come off. Yeah, this shit’s cheesier than a block of cheddar, but it teaches the kiddies a good lesson while delivering a not half bad story. It’s a notably strong entry for the series.

4. The Werewolf of Fever Swamp 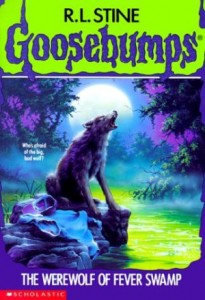 The Werewolf of Fever Swamp isn’t an especially noteworthy Goosebumps entry. There’s no creative creatures or high moral lessons in this one. What is here though is an exceptionally strong story featuring one of horror most famed monsters. In terms of pure storytelling, Swamp is probably the most effectively scary tale the original series ever produced. This is the book that scared the piss out of more than a few kids, and remains one of the more effective young adult horror stories ever written. In the end though, it’s just a werewolf story, not showing off some of the vast creativity of later books. However for the younger crowd, it’s still a damn fine read.

3. Night of the Living Dummy 3 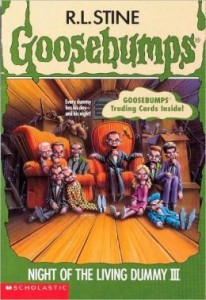 Slappy the dummy is probably the most iconic figure in Goosebumps ,and it’s not hard to see why. Nobody likes ventriloquist dummy’s. NO ONE. I’ve never been able to see what makes a wooden doll that talks when you put a hand up it’s ass so appealing. Slappy is just f**cking creepy, even if he’s more mischievous than outright murderous. Night of The Living Dummy 3 has everything the previous did, except more. More mischief, more Slappy, more creepy ass dummys coming to life; what’s not to love?

2. Stay Out of The Basement 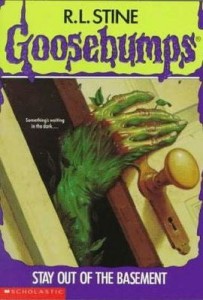 This book scared me shitless as a kindergartener. In hindsight, Stay Out of The Basement wasn’t particularly scary, but it had one thing going for it; creativity. Goosebumps version of Invasion of the Body Snatchers, the monster in Basement is a particularly inventive one; an evil plant clone that’s posing as our protagonists father. One of the scariest ideas for children has always been the loss of a parent, and Stine does a good job of showing that. Watching your dad bleed chlorophyll and eat plant food is weird enough; when he starts chasing you with a hatchet shit get’s even scarier. Only the 2nd book released in the series, this set a damn high standard.

1. The Ghost Next Door 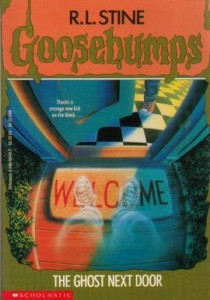 As enjoyable as all the Goosebumps book were, nothing even really came close to The Ghost Next Door. A shockingly sad story that deals with heavy themes like regret, depression, and moving on, it is unquestionably the finest story Stine has ever written. The story follows Hannah, a gullible preteen on summer break, as she falls in love with her neighbor, bad boy Danny. The young couple begins to fall in love, but as Danny’s behavior grows increasingly erratic, Hannah is forced to put her foot down- until Danny accidently puts his hand through her body. Twist is, Hannah was a ghost all along, inhabiting the real world after accidently burning her family to death years earlier. Holy shit Goosebumps , literally WHAT THE F**K. The novel ends with Hannah saving Danny’s life from yet another house fire and calling out his name as she descends to Heaven with her family.

Beating The Sixth Sense to the punch six years in advance, this novel packs a serious punch, as most novels where the protagonist accidently kills their entire family tend to do. It’s without a doubt the best entry in the entire series.

Well guys, that’s my top ten books from my favorite childhood series. It wasn’t always perfect, but damn it, these were fun little journeys into a milder world of horror. Now we just have to see how the movie stacks up.

Jeff is a writer for The Blood-Shed and eat, drinks, and bleeds horror. You can help him write his first book here.