"Vacations can be Hell"

What is it about an old RV that is just inherently creepy? When I was in high school, one of my friends had an RV in their backyard, almost identical to the one in this film, and it was where we all hung out. I always thought it was an awkward place to be and felt uncomfortable. Maybe it had some secrets hidden inside too? 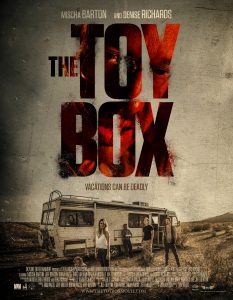 The Toybox is a non-stop thriller that once it takes off – never gives you a chance to breathe. I’m not saying it was a perfect movie. It was low-budget, full of horror clichés and that made it easy to guess what was going to go wrong at every turn. But… it reminded me so much of films like the original The Hills Have Eyes or The Texas Chainsaw Massacre, (which I adore) that I could forgive its imperfections for the sheer nostalgia it brought me.

Synopsis: Charles (Greg Violand) buys a vintage RV with the hopes of taking his family on the perfect vacation. He promised his recently deceased wife that he would try to get past the differences they have and reconcile with his two sons. Along for the trip are his son Steve, (Jeff Denton) his wife Jennifer (Denise Richards) and their little girl Olivia. (Malika Michelle) Pot smoking brother Jay (Brian Nagel) and the family dog are there too. On the way they pick up a brother (Matt Mercer) and sister, (Mischa Barton) stranded on the side of the road and then promptly get lost in the desert. By the time they find out the terrible secret about the RV, (It was owned by a ruthless serial killer named Robert Guthry) it’s a bit too late and things go to hell fast!

Now right off the bat, it’s obvious that the RV is not in any shape to drive, and that grandpa doesn’t use any kind of navigation. How perfect can a trip be if you are in a piece of crap on wheels and don’t know where you are going? Oh yeah- and it may be a little possessed.

The Toybox was directed by Tom Nagel. Jeff Denton, who plays son Steve, wrote the story as well as the screenplay. It’s a pretty straightforward, predictable slasher film, with a very 70’s feel. Right from the very first scene, we see that the RV is pure evil, so as audience members we are not surprised when the carnage begins.

I was very entertained by the film. I loved seeing the supernatural elements appear, so we knew there was a malevolent spirit at work. I liked the way they did flashbacks, some in visions and some on the RV’s TV screen, of what happened in the past. Our evil entity wanted us to know that he still resides in the RV, who he is and to see the details of his past slaughters! This serial killer (played wonderfully creepy by David H. Greathouse) is quite the show-off! He loved one old song and whenever that creepy music came on the radio, I knew he was going to brutally add another victim to his headcount. 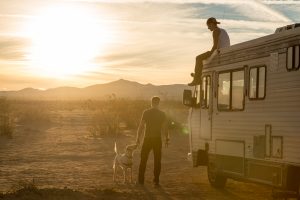 Obviously shot on location, the cinematography by Ken Stachnik was one of the highlights for me. The empty, dusty landscape and the moody lighting really added to the vintage look and gave it a very realistic feel.

I thought the gory SFX were super well done. I cringed and yelled at the screen during a couple of scenes when I could see the bad thing coming before the person did. I mean, do not stick your hand in a car engine ever, or let your child play right behind an RV that has already been killing people. Parents, watch your kids! 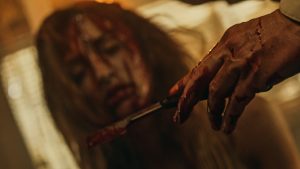 One of the problems for me was when something happened that took me out of the moment. For example- the dog. When things started to go south, the dog runs off into the desert. Was it wrong that I spent the rest of the movie wondering where the dog went and when he was coming back to save his masters?

I also felt some of the characters, especially Mischa Barton and Denise Richards, (sorry ladies) seemed to seriously underreact when they lost someone important. I would be crying my head off, just sayin’.

The last thing I kept thinking throughout the film was that the police would never have allowed this vehicle to be for sale- It was a crime scene! It would have been taken apart piece by piece and processed. So, how’d it get back out there in one piece to be for sale?

So overall- I think The Toybox was fun, if not great, fast-paced and nostalgic. I love gore so this supernatural thriller satisfied my need for great gruesome SFX. The acting could have been more inspired, but I loved David H. Greathouse’s serial killer performance and Mischa Barton does have one really great flip-out scene.

On September 18th, the film was available nationwide on Blu-ray, DVD and Cable and Digital HD, including Amazon Instant, iTunes, iN DEMAND, DirecTV, Comcast, Optimum, Dish, Google Play and more.