The latest from acclaimed production company, Full Moon Features is Amazon’s new series Trophy Heads. Following the story of a die-hard horror fan taking his love for their leading... 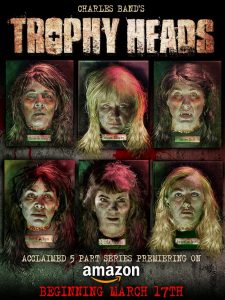 The latest from acclaimed production company, Full Moon Features is Amazon’s new series Trophy Heads. Following the story of a die-hard horror fan taking his love for their leading ladies in a.. rather “deadly” place, the series is set to star Adam Noble Roberts, Maria Olsen, Linnea Quigley, and Michelle Bauer alongside Darcy DeMoss, Denice Duff and Brinke Stevens.

From the forever-producing mind of Puppet Master’ mogul Charles Band comes this 5-part series. Each part featuring either Quigley, Bauer, DeMoss, Duff or Stevens portraying exaggerated versions of themselves, meeting their end by their “biggest fan”. Post-death, their heads then become this fans “trophies”. Like a hunter’s kill is that hunter’s trophy. If you catch my drift.

Synopsis :
“Trophy Heads’ tells the episodic tale of a paranoid “mama’s boy” (Adam Noble Roberts) who whiles away his days and nights enjoying himself (in every sense) to classic horror movies and the comely leading ladies who are menaced within them. Feeling that these famous ladies aren’t getting the treatment they deserve, he devises an unholy plan, with the approval of his equally demented mom (Maria Olsen) -to pay the ultimate tribute to his aging heroines.”

With a score by composer Richard Band and cameos by Full Moon/Empire Pictures legends Stuart Gordon and David DeCoteau, we can expect to see this splatter series on Full Moon’s Amazon Channel beginning March 17th