“You are being manipulated by forces you cannot begin to understand”

I was skeptical as I sat down to watch Episode 1 of Fox’s newest movie adaptation: The Exorcist. The show, that premieres tonight, could have been just another version of the same old movie redone, but that was not the case. For myself, I think I am the only person ever that wasn’t scared out of their seats at the original The Exorcist movie. I was not scared at all and found myself laughing in places. Why didn’t it scare me? Maybe I was too young when I saw it the first time, (the throw-up scene made me laugh so hard, we almost got kicked out of the theater) and I have never gone back and revisited the movie. Maybe because I’m not Catholic and the priest part of it I couldn’t relate to. The 1973 William Friedkin classic is still to some people the scariest movie they ever saw. So to do a TV show? Many people are upset about the reboot and may not like it if they compare it to the original. Too many great movies are being re-made for TV and are not done well or better in any way. But fans, give The Exorcist a chance. Fox takes inspiration from the original, but doesn’t completely duplicate the story. The cast is amazing, the adaptation from Jeremy Slater is well done and there are so many possibilities! I actually enjoyed it a lot. Was it super scary? Not yet, but I see the potential there and I am going to watch it to see how the characters develop. 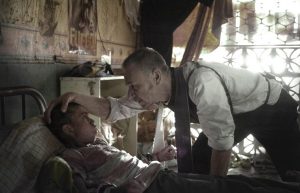 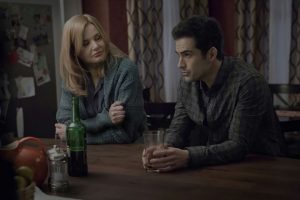 Fox has taken the well-known and unfortunately over-done subject of demonic possession and has made a drama worth watching. What I saw in the first episode set a creepy, tense atmosphere while they introduce us to the characters.

OK, here is the spoiler free plot: Angela Rance (played by Academy Award winning actress Geena Davis) believes something is very wrong in her home. Plagued by increasingly frightening nightmares, she isn’t the only one in her family suffering: her husband Henry (Alan Ruck) is slowly losing his mind, while their older daughter (Brianne Howey) spends all of her time locked in her room and the younger one (Hannah Kasulka) believes she hears strange noises coming from inside the walls. Desperate, she turns to Father Tomas Ortega, (Alfonso Herrera) the progressive leader of their suburban Chicago parish, setting him on a collision course with old school Vatican Priest Father Marcus Brennan (Ben Daniels). All of their fates will become entangled in a battle against an ancient force of evil.

In the pilot we see beautiful transitions from Mexico City, to where the show is set in Chicago. The use of dark monotone and deep muted colors along with great camera angles, makes this a beautiful show to watch. (Including an empty, foggy street with leaves blowing by, just waiting for our exorcist to stand in silhouette.) The bedroom scene in Mexico is full of every color and brings a feeling of dread immediately. All of the choices made by executive producer/director Rupert Wyatt are perfect and set a scene that foreshadows the evil to come. There is a dream-like quality, the kind of bad dreams we have, that when you wake up, they are hard to shake off because they seemed so real.

The first episode brings us some great acting. Geena Davis is high strung and believable in her character as the mom trying unsuccessfully to keep her family together. The two priests, that will become pivotal to the story, are polar opposites and play well against each other. Alfonso Herrera is terrific as the young, thoughtful but tormented Father Tomas, who seeks out help from an older priest when he starts realizing what is happening in the Rance household is beyond his abilities. His dreams about the exorcism of a little boy in Mexico bring him to seek help from a more experienced priest, when he finds out who he is. Ben Daniels is riveting as Father Marcus, a broken haunted-looking priest, who was hiding out, only to be brought out of exorcism retirement by our young priest.

This version of The Exorcist is not a copy. It pays homage to the movie. The similarities: the possessed child, the exorcism. Yes of course, it’s The Exorcist. But with more time to explore, there will be more characters, and we can see what the future emotional ramifications of being possessed are to the poor souls that go through it. A family torn apart, a body used and damaged, feelings of doubt and disbelief, people thinking you are just plain crazy and not that something supernatural is happening to you. There is so much done right in this show that I hope they really take us on an emotional ride and not just depend on jump scares. I want to be waiting for each episode, with dread and excitement, to find out what happens to characters I have become attached to.