Inheritance is Tyler Savage’s first feature film and wow, what a terrific debut! Not a straight forward horror movie, it still belongs on this website, because of the continuous feeling of dread it keeps you shrouded in. What blows me away, is that even with the pacing, the film is without the feelings of boredom that can go along with a slow and deliberate movie such as this. I kept leaning into my computer so I wouldn’t miss anything, I was that mesmerized! 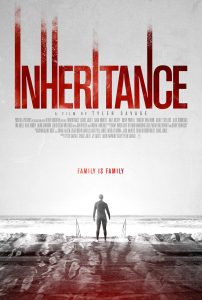 My synopsis for the film is this: Ryan Bowman (Chase Joliet) finds out his birth father has died and he just inherited a 2.5 million-dollar beach house. Having thought his real dad was already passed, he and his pregnant fiancé Isi, (Sara Montez) go to see the amazing house. Once there Ryan’s interest in finding out more about his father piques and he stays in the house instead of following the instructions his father left him, “Sell the house immediately.” Whether supernatural or psychological- Ryan pushes his family away, learns some horrifying things about his parents and seems to be poised to repeat past family transgressions. Nature seems to be winning out in this nature vs nurture film.

Even though I was left with a lot of unanswered questions- I loved this movie! Everything about it was a joy for the eyes and ears. The history behind the house and the land it sits on is apparently very dark. Tyler gives us just enough backstory to know that the guys who used to hang out here were very bad men, who did very bad things to young Native American girls. I could see the story becoming a vengeful Indian ghost story and that could have gotten campy fast and would not be half as interesting. Thank you, Tyler, for making this a wonderful tale of madness or is it ghosts, or both?

Inheritance is not a movie that fits into one small section of the genre. I feel like calling it a horror drama- but I’m not sure. I guess psychological thriller works too. It’s not often that a horror movie can still be subtle and be real horror- but there is horror to be had. When Ryan starts breaking down, having confusing visions and lapses in time, it is suspenseful, very dramatic and has some great practical gore effects. You can’t help but wonder if he is seeing spirits from the past, or if it is all in his imagination. Whatever is happening though, really affects the people around him in a horribly negative way. I’m sure if Ryan wanted to get to know his birth father, this is not exactly what he would have imagined. Either way you look at it, he definitely goes crazy.

Writer/Director Tyler Savage has this to say about why he wrote the film. “With Inheritance, I wanted to examine my feelings about family and heredity through a genre framework…. Like my protagonist, I struggle with feeling trapped by my own heredity. While I’m obviously my own person, I’ve often feared that I might be defined by darker aspects of my genetics, such as alcoholism and depression.”

Couple the great cinematography, with terrific acting, a superb script, an awesome soundtrack, edit it beautifully and you have a film that is sure to win awards! I recommend this movie!! It is a mystery that unfolds, but not all the way, leaving you room to make your own decisions and to also analyze some of your own personal feelings about family. I must admit though, I would love to see a sequel, just to have my questions answered and to learn more about the dark history of the backstory.

Tickets for the amazing and sinister film Inheritance are available now. To purchase CLICK HERE

Since 1998 DANCES WITH FILMS has grown from presenting a handful of films to more than 150+ each year…from only narrative features and shorts to include the top documentaries, music videos TV & web on the circuit today. In 2007 DWF brought new commitment to the indie world with the advent of the 2 Minute, 2 Step Short Film Challenge where we actually shoot 10 films during the festival and present them to enthusiastic audiences. In 2012 the festival moved to its current location – the famed Chinese Theatre in the heart of Hollywood.  From there it has expanded to 11 days with ever increasing sold out theaters.